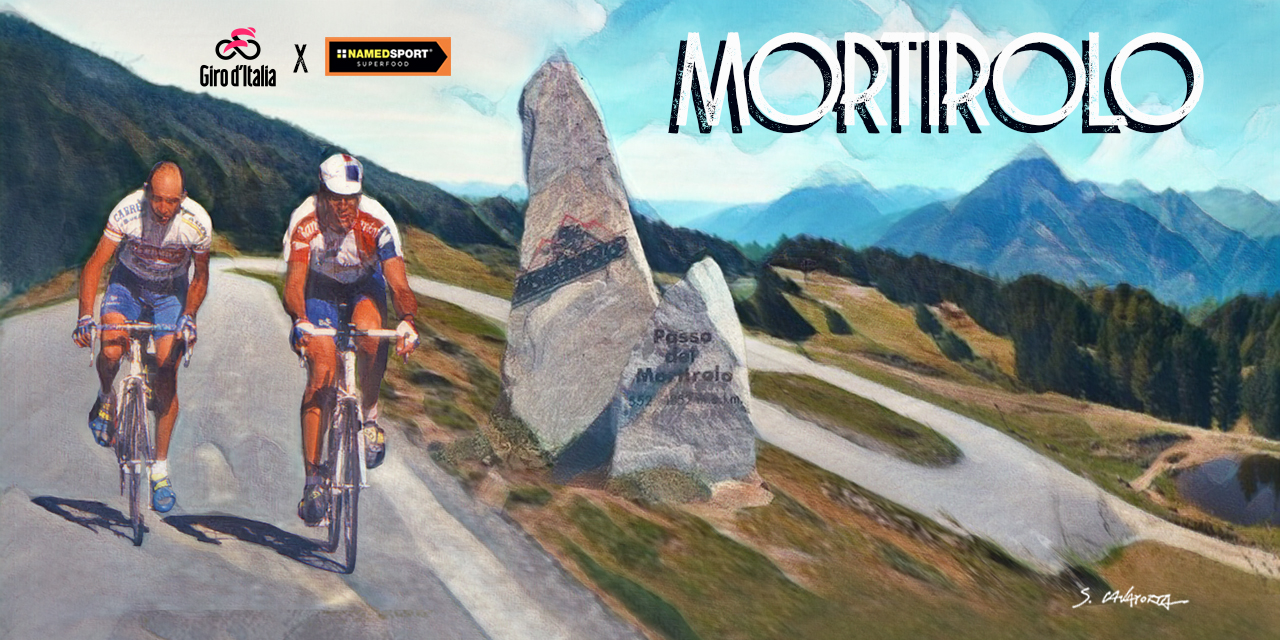 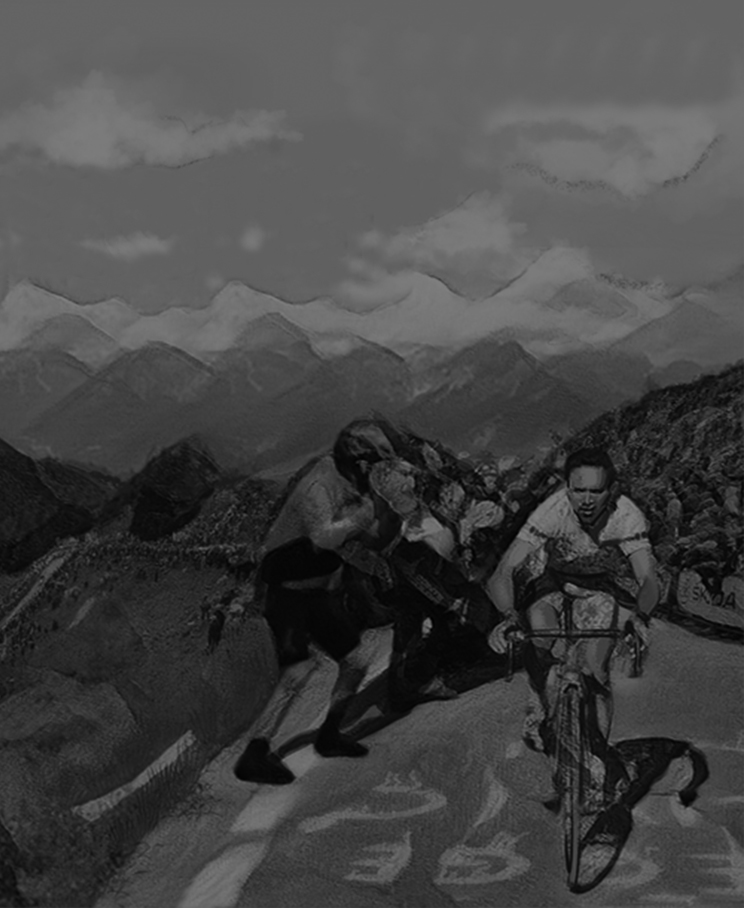 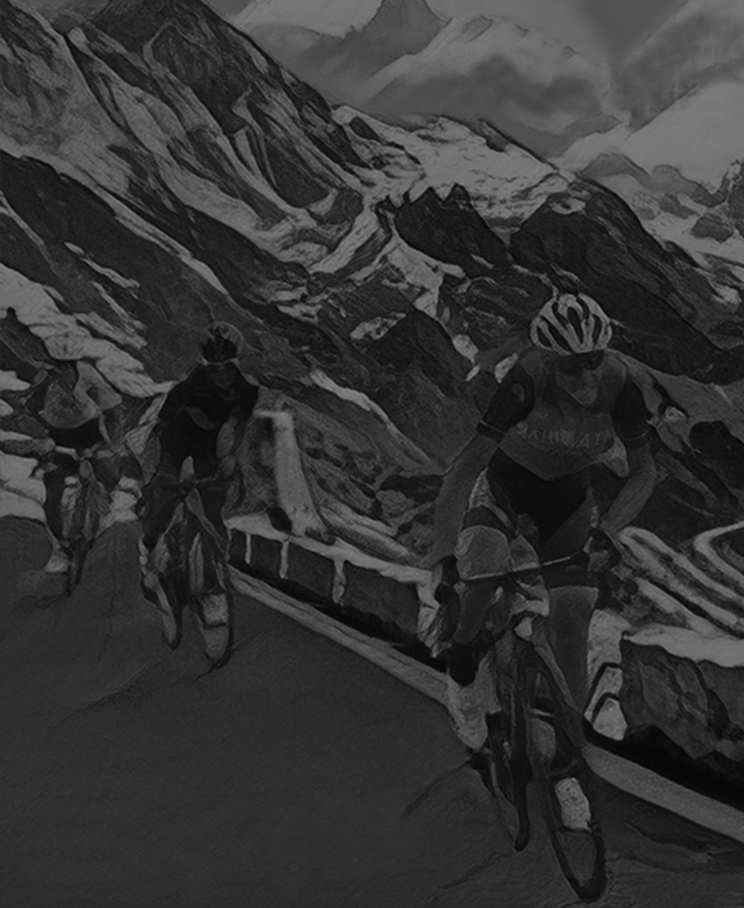 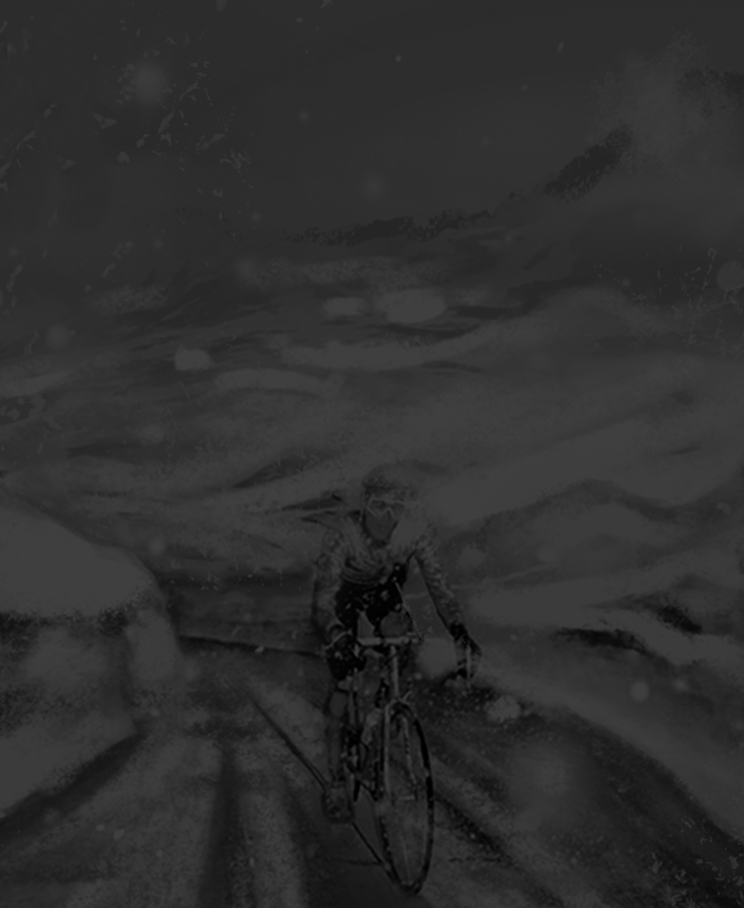 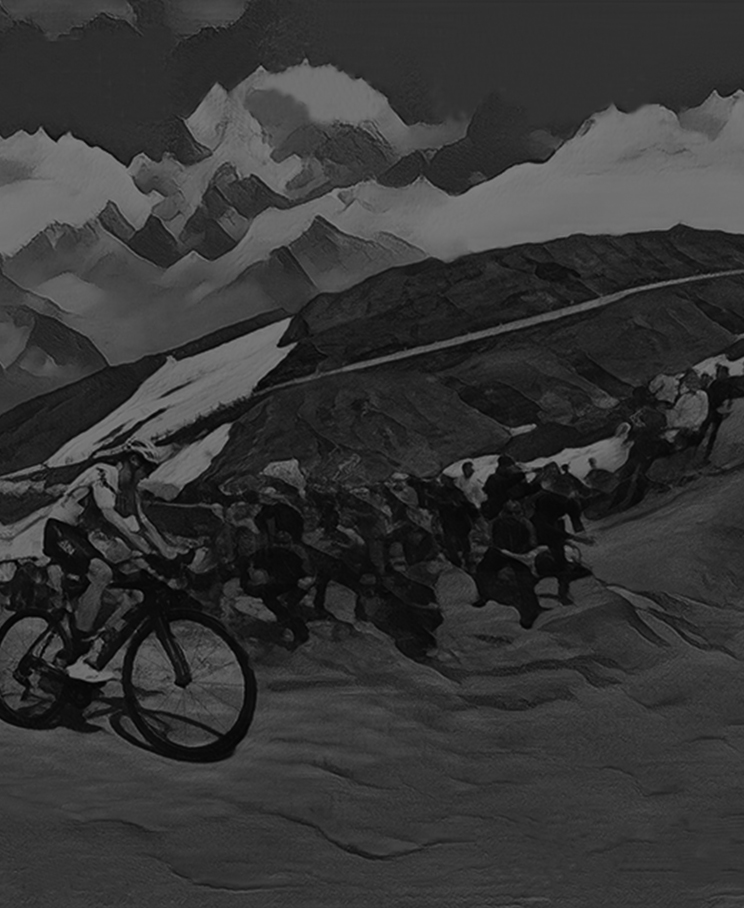 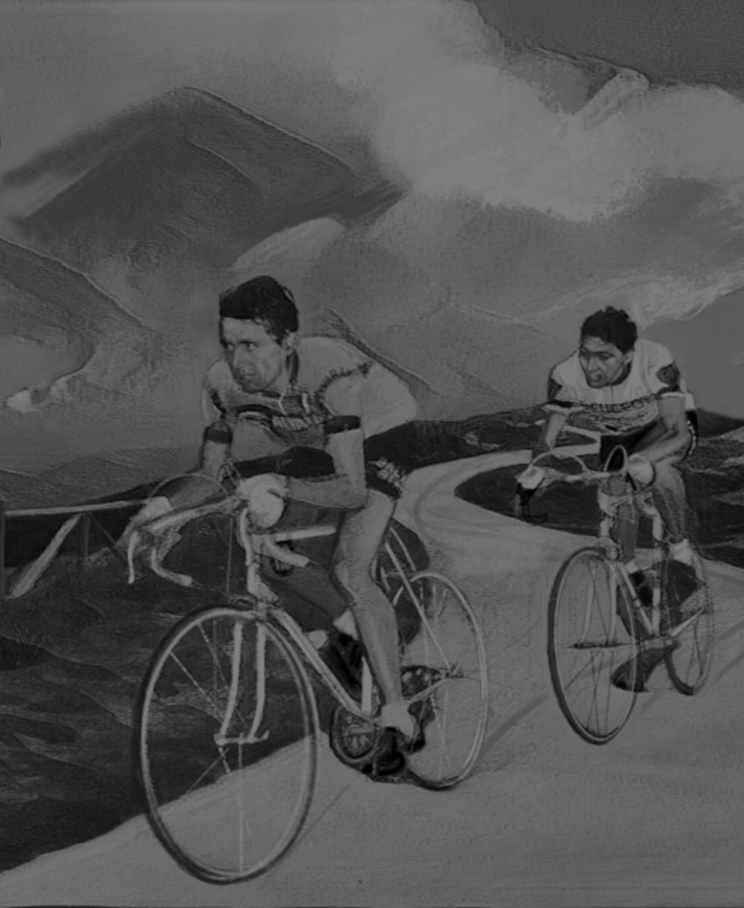 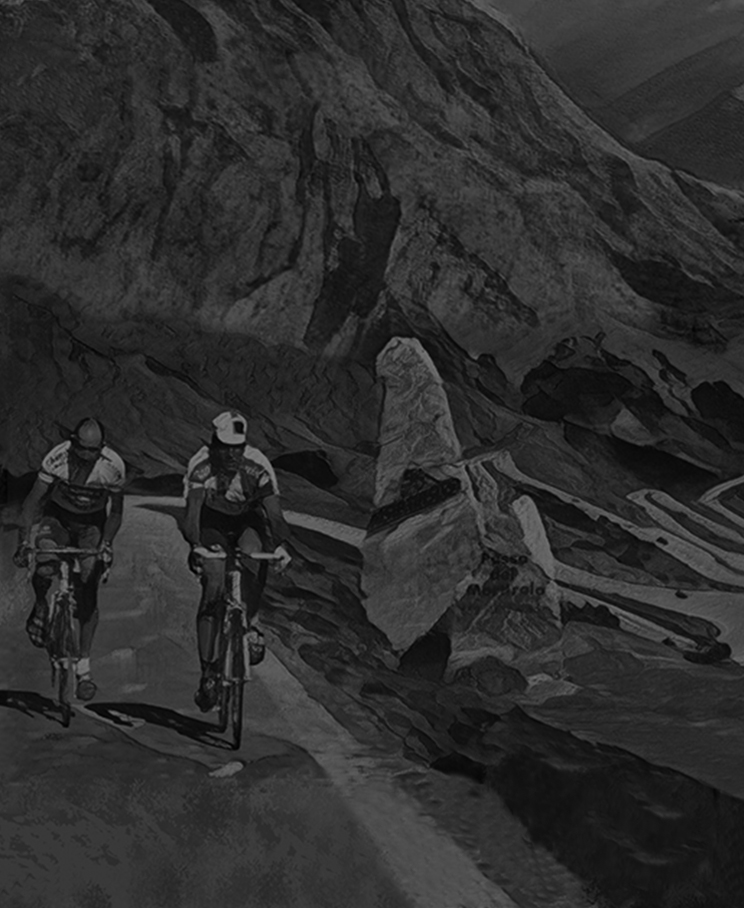 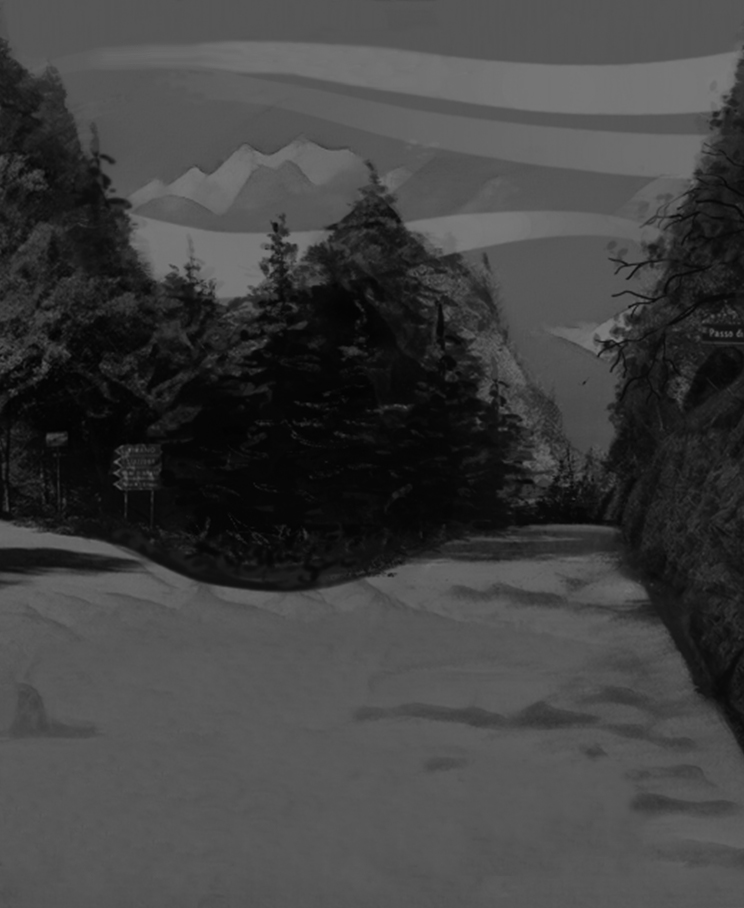 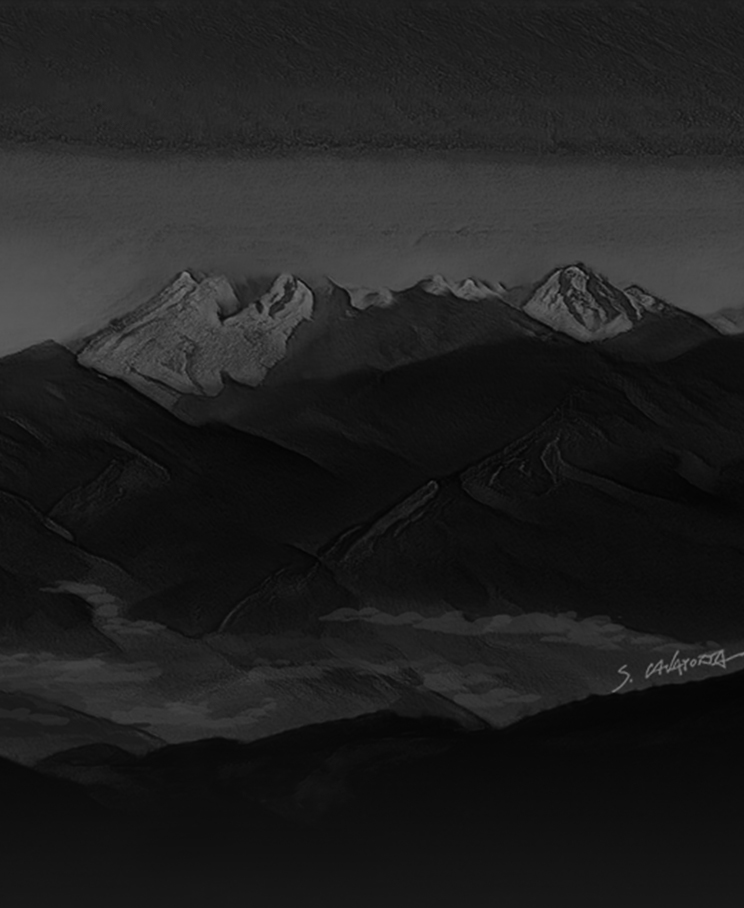 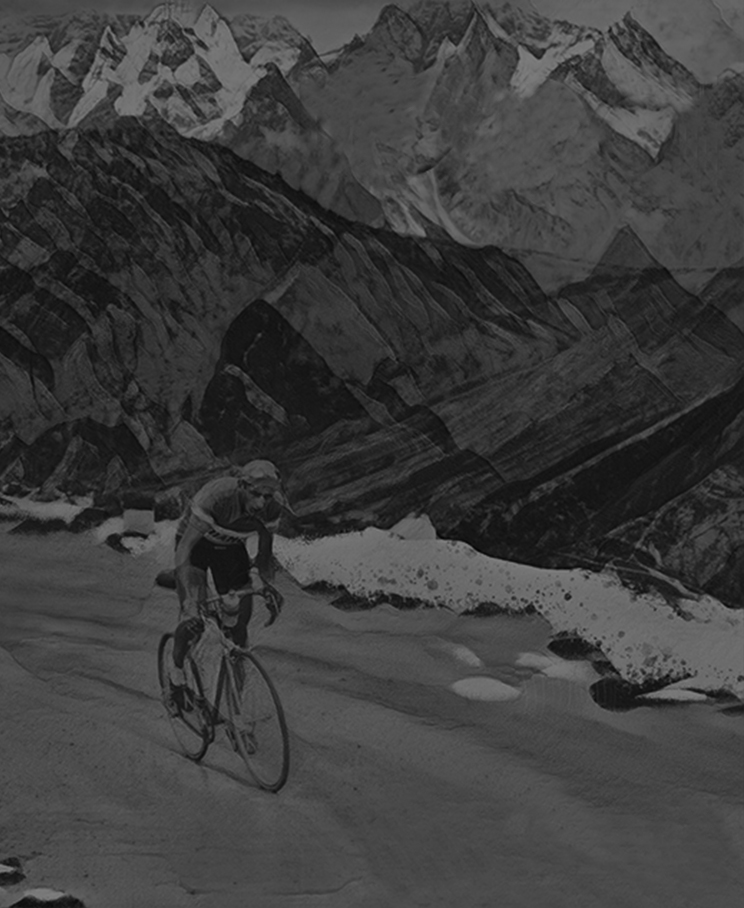 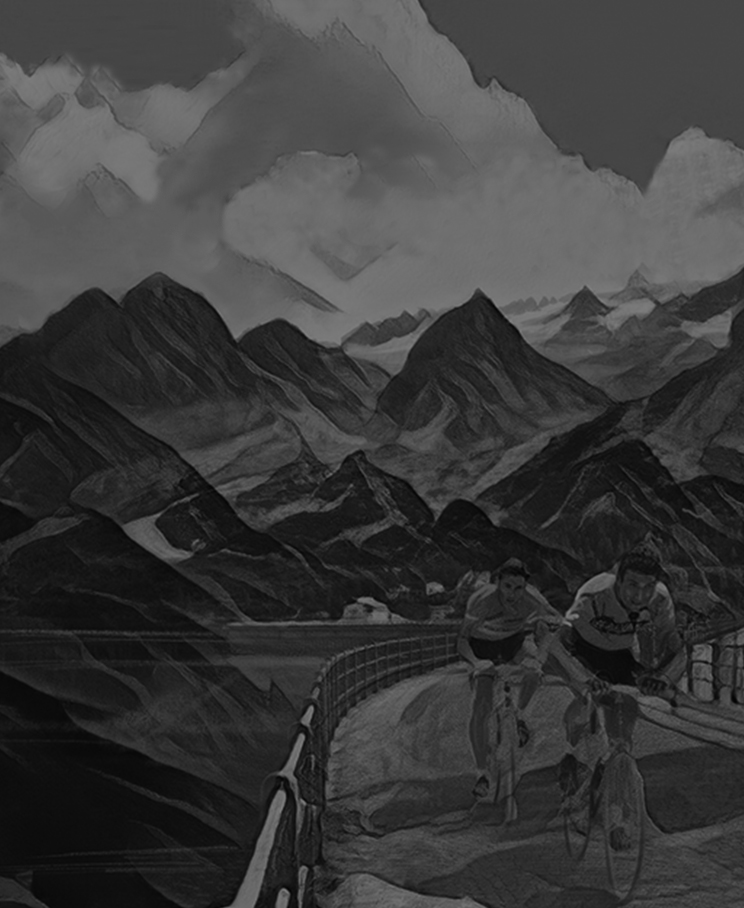 The rise of a warrior

Strategically located between the Val Camonica and the Valtellina, the Mortirolo Pass has been a battlefield long before June 3, 1990, when it first featured in the route of the Giro d’Italia.
Legend has it that the pass was named after a fierce battle that took place there in AD 773, when Charlemagne crossed swords with the Lombard military, which had been defeated in the battle of Pavia. The Carolingian army chased and found them by the pass, killing hundreds of enemy troops. The mountain was hence named Mortarolo (after ‘morte’, meaning ‘death’) and, centuries later, Mortirolo.
As we said, however, this is a myth.
The placename is actually thought to come from ‘mortèra’ or ‘mortarium’, two words referring to the presence of a pond, or to the concave shape of the summit of the pass.
What is not a myth is the fighting between the partigiani and the Nazi fascists that took place from February to May 1945, which many historians regard as the major field battles of the Italian Resistance movement.
The climb passed into cycling legend on June 3, 1990.
The ascent was from Edolo, and Venezuela’s Leonardo Sierra, first to the summit, eventually took the stage.
The Mortirolo was so fascinating that it was used, again, the following year, ascending from Mazzo, which became the ‘traditional’ side: 12.5 km with an average 10.5% gradient, topping out at 20%.
This is what happens to certain climbs.
Up to one day before, they are just unknown roads, lost in the middle of nowhere. Once they have been travelled, however, they immediately win the hearts of the organizers, of the riders and – above all – of the fans. That was the case with the Muro di Sormano and with the Zoncolan as well.
Then came 1994, the year when both the Mortirolo and Marco Pantani – two matching, twin stories –ultimately became legends.
June 5 was the day of the Merano-Aprica stage, with the Stelvio, Mortirolo and Santa Cristina climbs scheduled in order.
The Pirate, who was only 24 at that time, attacked along the punishing slopes of the second climb, at over 60 kilometres out.
He dropped Indurain, Bugno, Chiappucci and the Maglia Rosa Berzin, soloing over the top. He waited for Indurain in the flat stretch before the final ascent, where he took off again – this time for good – dashing to the line to take stage victory and the second place on GC.
In 2006, a sculpture was placed at the 8th kilometre of the Mortirolo to commemorate that accomplishment. Pantani is portrayed attacking, his hands in a low grip on the handlebars, looking back at his defeated opponents.
That day, in a place that had been a battlefield for over a thousand years, the Pirate did more than just score a stage win. He found his vocation, his destiny. He found himself. 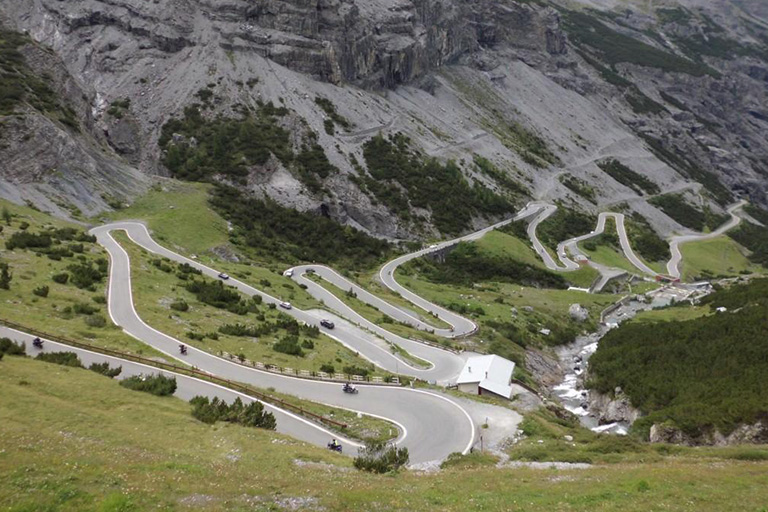 The Mortirolo and the Giro d'Italia 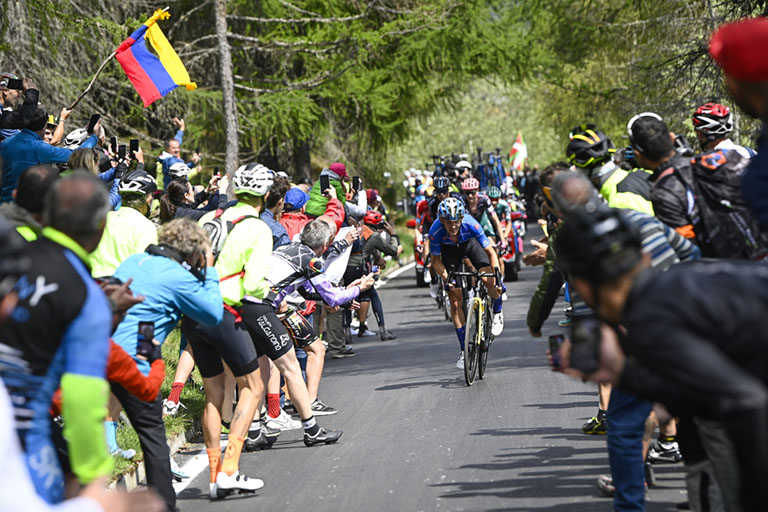 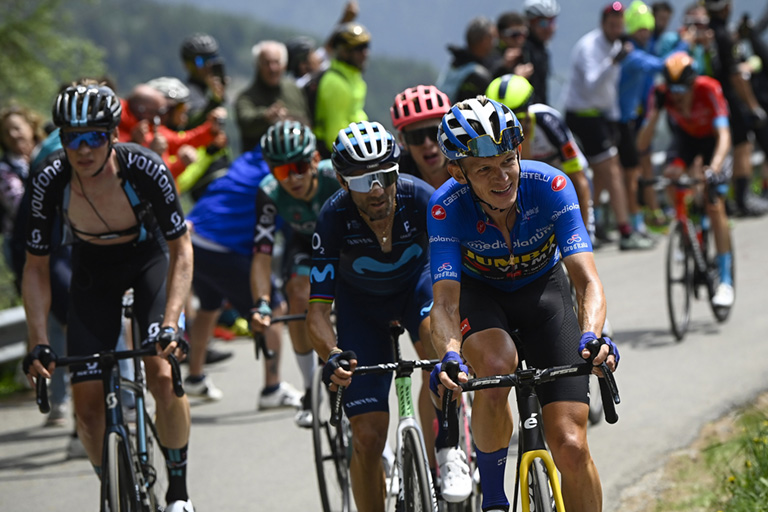 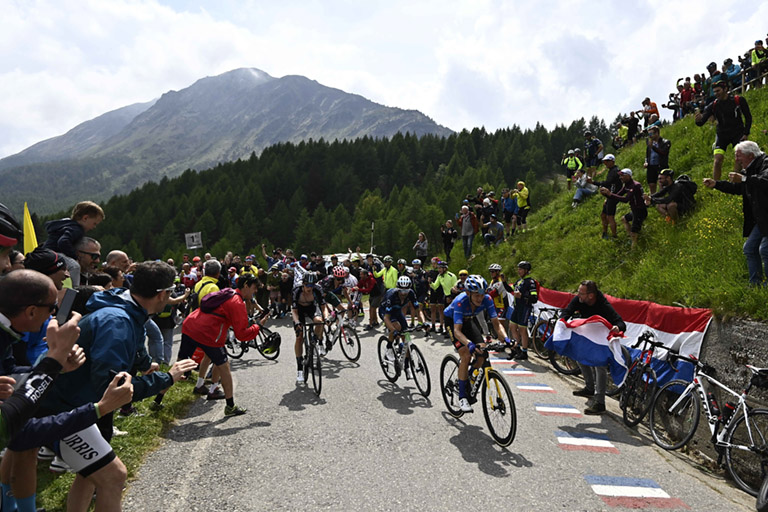 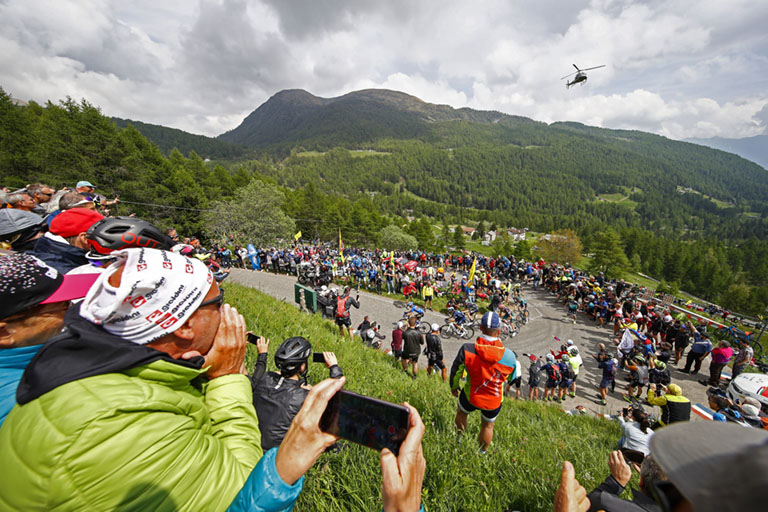 Early into the Giro, according to rumour, the Gavia was to be cancelled since Italy was gripped by a bad weather spell. Three days before the stage, it was eventually replaced by third-category climbs up to Cevo and Aprica, after an alleged double pass over the Mortirolo, which the organiser had always denied. After a long breakaway, and after enduring the cold and rain (at the top of the Mortirolo, the thermometer read 3 °C), Ciccone would eventually sprint to victory against the Czech Jan Hirt, who had been reluctant to work together in the final false-flat drag. Nibali tried to attack on the Mortirolo. Movistar and Carapaz let him up the road, while Roglic, the odds‑on favourite, fell behind. On the downhill and in the following flat, the Movistar squad and Nibali (together with his teammate, Caruso) worked together with the aim of dropping Roglic, who was riding with Yates. Overall, Nibali moved to second, ahead of Roglic, with a gap of 1’47” to Carapaz, and the Slovene sat just behind him, 2’09” back. 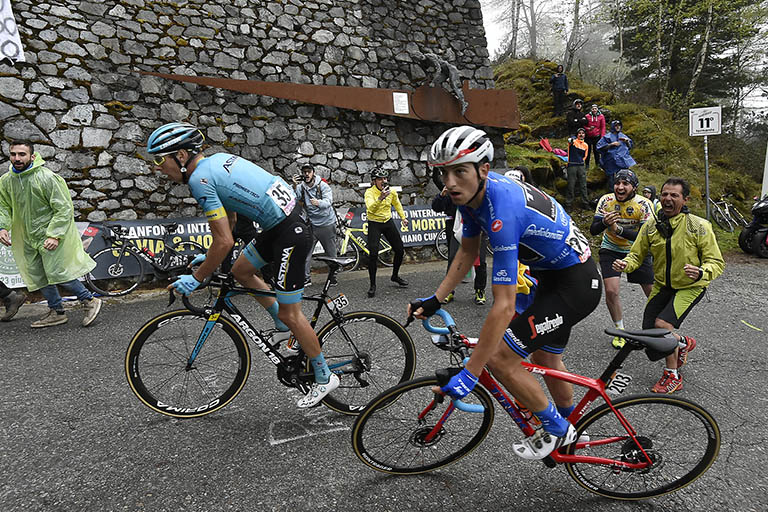 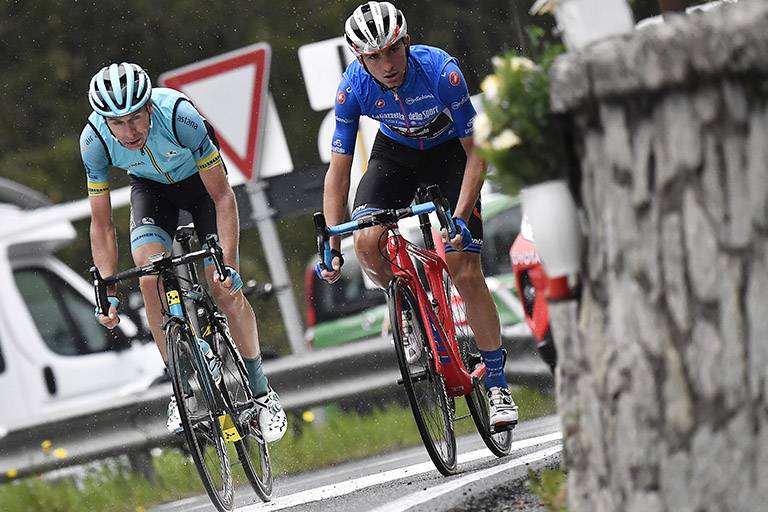 Dumoulin stopped for an emergency nature break on the lower slopes of the closing climb (Umbrailpass), as the peloton waited for him for a few minutes. Zakarin eventually pulled away, followed by Quintana, Pozzovivo and Nibali, although not at a cracking pace. Dumoulin set off on a solo chase, and managed to clear the summit 2’20” behind them. Nibali popped out when the Umbrailpass was a little more than one km away, slowly reeling in one rider after another. Along the descent, he eventually jumped across to Landa, the last one remaining from the previous break. Flying down all the way to the line, Vincenzo took a masterful sprint win, after 17 stages without an Italian winner – the longest run of misfortune in the history of cycling.

After puncturing on the way down from Aprica, and withholding attacks by Astana and Katusha, Contador roared up the Mortirolo, catching and passing Landa, Aru, Trofimov and Kruijswijk. Aru fell behind on the way down, and ultimately blew along the closing climb up to Aprica. Landa pulled away with a little more than 3 km to go, dropping Kruijswijk and Contador, and storming to victory. Overall, Contador was leading Landa by over 4 minutes and Aru by nearly five. 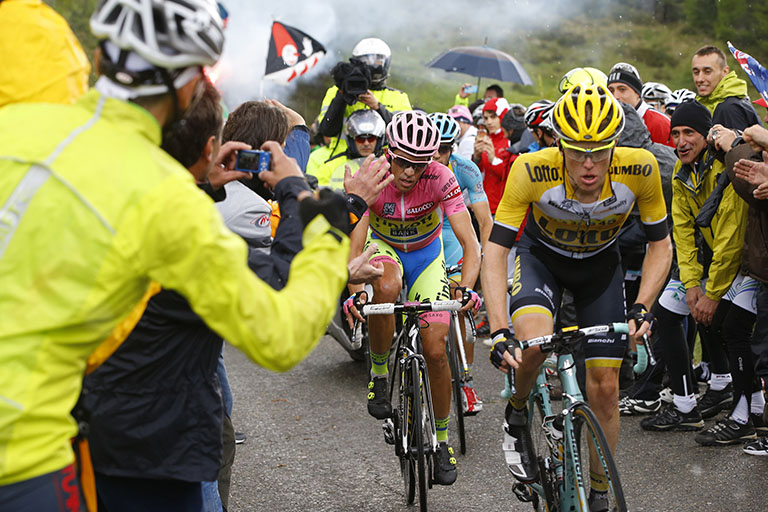 De Gendt broke away along the Mortirolo, enjoying a solo win on the Stelvio. Rodriguez surged 700 metres before the finish, shaving 14” off Hesjedal’s lead, and sitting 31” ahead of everyone else on GC. 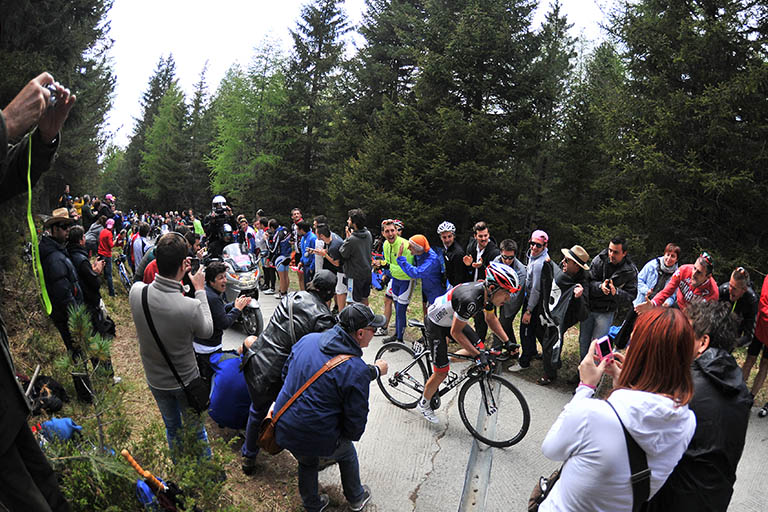 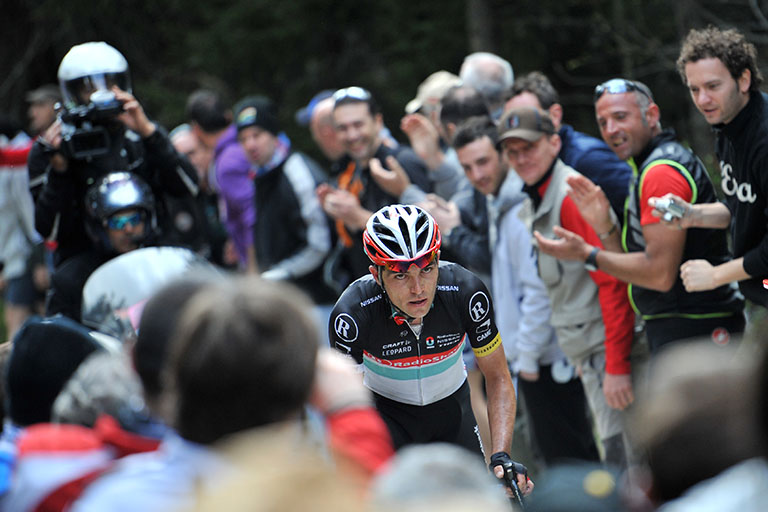 Di Luca cracked down, finishing 4 minutes behind. Contador kept a close eye on Riccò, managing to retain the overall lead by a slender 4-second margin.

Basso and Simoni clipped off and stayed away together on the Mortirolo. According to Simoni, Basso allegedly begged him not to attack along the descent, which he did. Basso, instead, rode away from him and took stage victory in Aprica, flashing a picture of his new-born son. Simoni was livid, and called Basso an “extra-terrestrial”, which is how doped athletes were usually referred to. In an interview with the Gazzetta, Simoni would later report, “Up to that moment I had respect for Basso. But then I found out that it was not his first error in trust. Now, when I talk of Basso I am always a little bit of a bastard, I no longer respect him”.

Early in the morning, at 6:30, Pantani underwent anti-doping tests. With a haematocrit reading of 53% (later reduced to 52% to accommodate for possible errors), he was forced out of the race. Gotti dropped Savoldelli along the Mortirolo, staking his final claim on overall victory.

Gotti and Tonkov pulled away together on the Mortirolo, like they did the previous year, and were later joined by Belli. The Russian took stage victory, while Gotti won the Giro.

Olano cracked after being attacked by Gotti and Tonkov along the Mortirolo, losing the leader’s jersey to his Russian rival.

During this legendary stage, Pantani attacked along the Mortirolo, and Indurain fell behind. After slowing down to snack along the descent, waiting for him, he blasted away along the Santa Cristina, leaving Indurain in his wake once again. Pantani landed a stunning solo win in Aprica, nearly 3 minutes ahead of Chiappucci, and three and a half minutes ahead of his closest GC rivals, Indurain and Berzin.

Chioccioli attacked along the Mortirolo and continued to push, alone, for a further 50 km, hence extending his overall lead.

When the fearsome Moritirolo was tackled for the first time ever, the less brutal side was used. Venezuela’s Leonardo Sierra passed into history as well, pulling away along the climb, and putting in a disappointing performance along the descent. Regardless of his poor riding, and despite a few crashes, he managed to retain a slender margin, and became the first Venezuelan winner of a stage at the Giro.