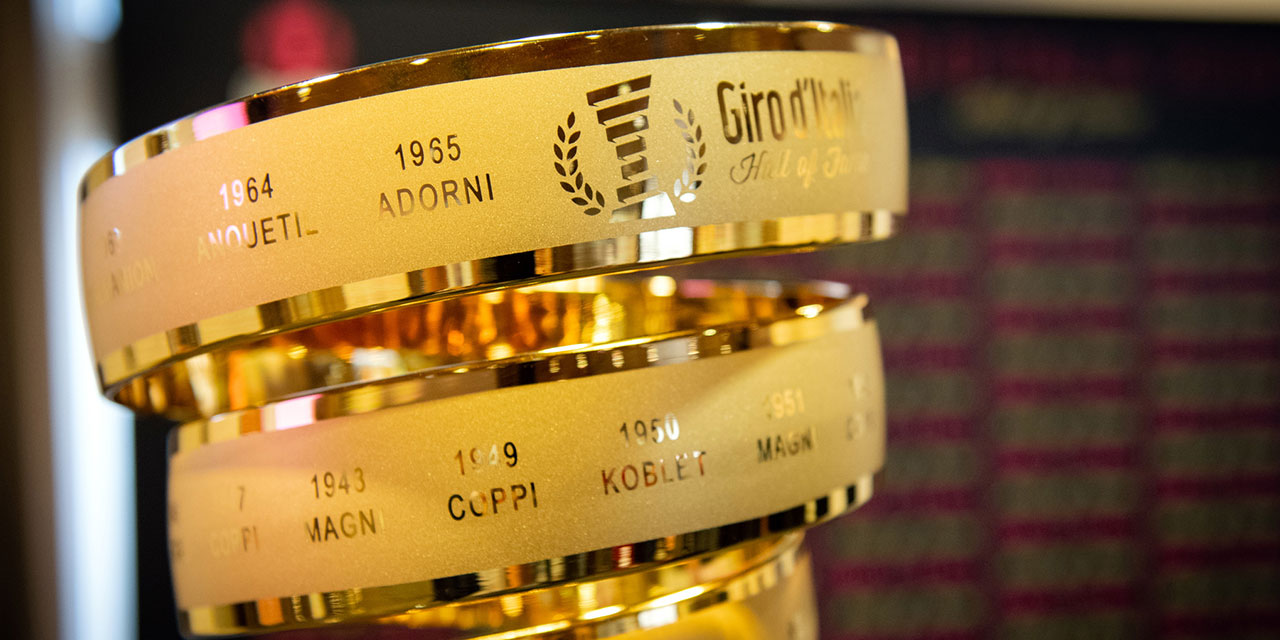 The last winner
hall of fame 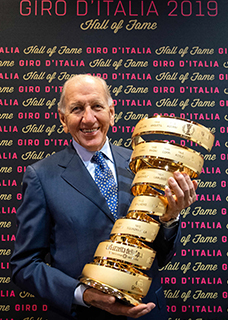 A legend of the sport, Italian Vittorio Adorni won the Giro d’Italia in 1965. Having turned pro in 1961, his list of impressive achievements includes numerous stage victories at the Corsa Rosa and remarkable success at the 1968 Road World Championship. During his career Adorni, born 14 November 1937 in San Lazzaro Parmense, wore the Maglia Rosa 19 times and won 11 Giro stages, the first of which was Moena - Aprica in 1962; a feat he went on to repeat in the following two years, winning two stages on both occasions. His 1965 Giro d'Italia General Classification success came after winning three stages. He also wore the Maglia Rosa in the 1966 Giro after winning the Parma time trial, although overall victory escaped him. In 1967 Adorni won another stage in Trento, on his way to taking fourth place overall, and in 1969, Adorni won his final stage at the Giro in Folgarida.In 1968 Adorni won the UCI Road World Championship in style. On the famous motor racing circuit at Imola, Italy, he escaped with 93km to go and rode away to finish 10 minutes clear of the field… even his regular Faemino–Faema teammate Eddy Merckx did not take up the chase. 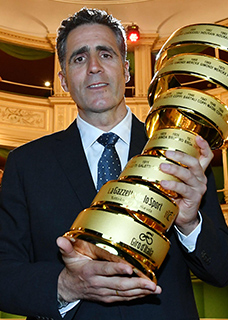 Miguel Indurain, known to so many cycling fans as ‘Miguelon’ or ‘The Navarro’, is a giant in the history of cycling. A supremely strong time trialist who forged his most famous victories in stages against the clock, Indurain also knew how to defend himself in the mountains, winning the Giro d’Italia in 1992 and 1993, along with five consecutive Tours de France. His palmares also boasts an Individual Time Trial World Championship in 1995, the ITT Olympic gold medal in Atlanta, 1996, and the Hour Record set in 1994 at 53,040m.Born 16 July 1964 in Villava, Navarre, Spain, Indurain was also the first to win two consecutive editions of the Corsa Rosa since Eddy Merckx (1972-1973-1974). In the years since Indurain’s retirement, no cyclist has managed to win two consecutive Giros. He was the first Spanish rider to win the Giro d'Italia, with only his compatriot to win since being Alberto Contador in 2008 and 2015. 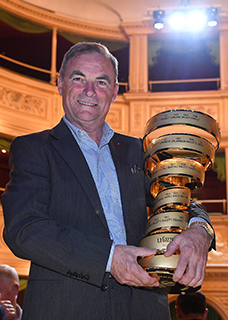 One of only six cycling superstars to have won all three Grand Tours during their careers, Frenchman Bernard Hinault was amongst the strongest riders of all time. Nicknamed ‘le Blaireau’ (“the Badger”), Hinault won the Giro d'Italia in 1980, 1982 and 1985. He competed in 13 Grand Tours during his career, winning ten of them and collecting two second place finishes. Born 14 November 1954 in Yffiniac, Brittany, his Corsa Rosa record is extraordinary, having competed three times, and won all three. Over the course of these three General Classification triumphs, he won six stages and wore the Maglia Rosa for 31 days. With such a magnificent palmares, Hinault is considered to be one of the three greatest Grand Tour racers of all time, alongside Fausto Coppi and Eddy Merckx. 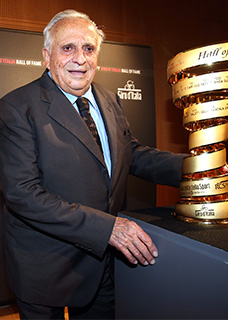 Ercole Baldini won the Giro d’Italia in 1958, taking three stage victories and wearing the Maglia Rosa for seven days. In the same year as winning the Corsa Rosa, the ‘Forlì Train’, as Baldini was nicknamed, also became UCI Road World Champion in Reims, France, on 31 August.Born 26 January 1933 in Villanova di Forlì (Emilia-Romagna), Baldini was twice Italian national road champion. Before turning pro, he demonstrated his versatility by winning the Olympic gold medal in the road race, on 7 December 1956 in Melbourne, Australia – that’s after taking the title in the Individual Pursuit at the Track World Championships in Copenhagen, Denmark, and setting the Hour Record at the Vigorelli Velodrome in Milan with a distance of 46,393m. 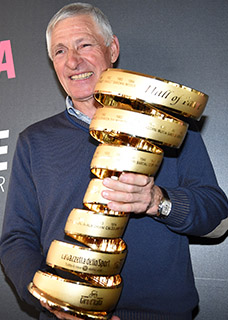 Francesco Moser entered the Giro d'Italia Hall of Fame thanks to his success in the 1984 Corsa Rosa when he out-time trialed the famous Laurent Fignon to tear the Maglia Rosa from his grasp on the final stage. Winner of 23 Giro stages and the Points Classifications at four editions, 1984 was Moser’s only GC victory, and it lives long in the memory. With 273 race victories, ‘The Sheriff’ – so called for his outstanding leadership qualities – is Italy’s most successful rider of all time and places third in the world rankings after Eddy Merckx and Rik Van Looy. As well as earning the 1977 UCI Road World Champion title in San Cristobal, Venezuela, Moser is well-known for collecting three consecutive victories at Paris-Roubaix between 1978 and 1980. He also won the Milano-Sanremo (1984), two editions of the Giro di Lombardia (1975 and 1978) and beat Eddy Merckx’s Hour Record in Mexico City (1972) with a mark of 50,808m. 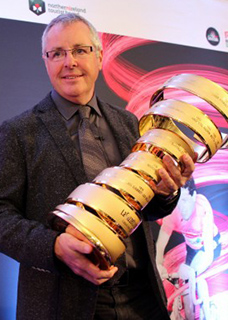 Irishman Stephen Roche, born in Dublin on 28 November 1959, was a professional cyclist from 1981 to 1993. It was his tremendously successful 1987 season that defines him as a cycling hero.He became the fifth rider to win both the Giro d’Italia (including victory in both ITT stages) and the Tour de France in the same year. He went on to complete the Triple Crown by winning the UCI Road World Championship in Villach, Austria, beating the incumbent Champion Moreno Argentin by 1 second in the sprint. This feat made Roche only the second cyclist in history to win the Giro, Tour and the Worlds in the same year, after Eddy Merckx in 1974.The Irish champion’s induction into the Giro d’Italia Hall of Fame coincided with Ireland hosting the Grande Partenza of the Giro d'Italia in 2014. 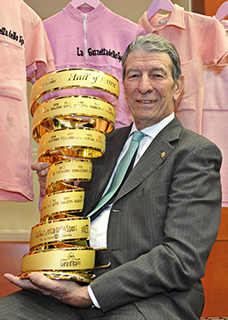 Felice Gimondi – a pro rider from 1965 to 1979 who achieved a total of 118 race victories – was a complete champion: a formidable climber, time trialist and sprinter. The three-time winner of the Giro d'Italia (1967, 1969 and 1976), nicknamed ‘The Phoenix’, sadly passed away in 2019. He holds the record for most General Classification podiums at the Corsa Rosa, with an amazing nine top-three finishes.Gimondi was born 29 September 1942 in Sedrina. As Eddy Merckx’s longtime rival he was one of only seven riders to have won all three Grand Tours and was enormously successful at one-day races, winning the World Championships in 1973 along with victories at Paris-Roubaix (1966), Milano-Sanremo (1974) and the Giro di Lombardia twice (1966 and 1973). 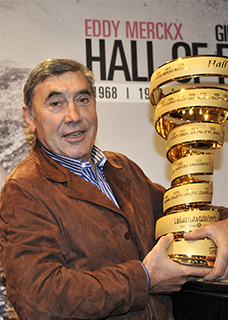 Eddy Merckx is, in the eyes of many, the greatest racing cyclist of all time. Nicknamed ‘The Cannibal’, Merckx is the most successful rider of all time with overall victory in five editions of the Giro d’Italia (1968, 1970, 1972, 1973 and 1974), five Tours de France and one Vuelta a España. He also won three World Championships, 19 Classics, including all five Monuments, and more than 500 races on the international calendar. Competing in the Corsa Rosa, he won 25 stages and wore the Maglia Rosa for a record 77 days. The legendary Belgian, born 17 June 1945, is one of just seven riders to have conquered the Giro and Tour in the same year but the only one who has done so on three occasions.