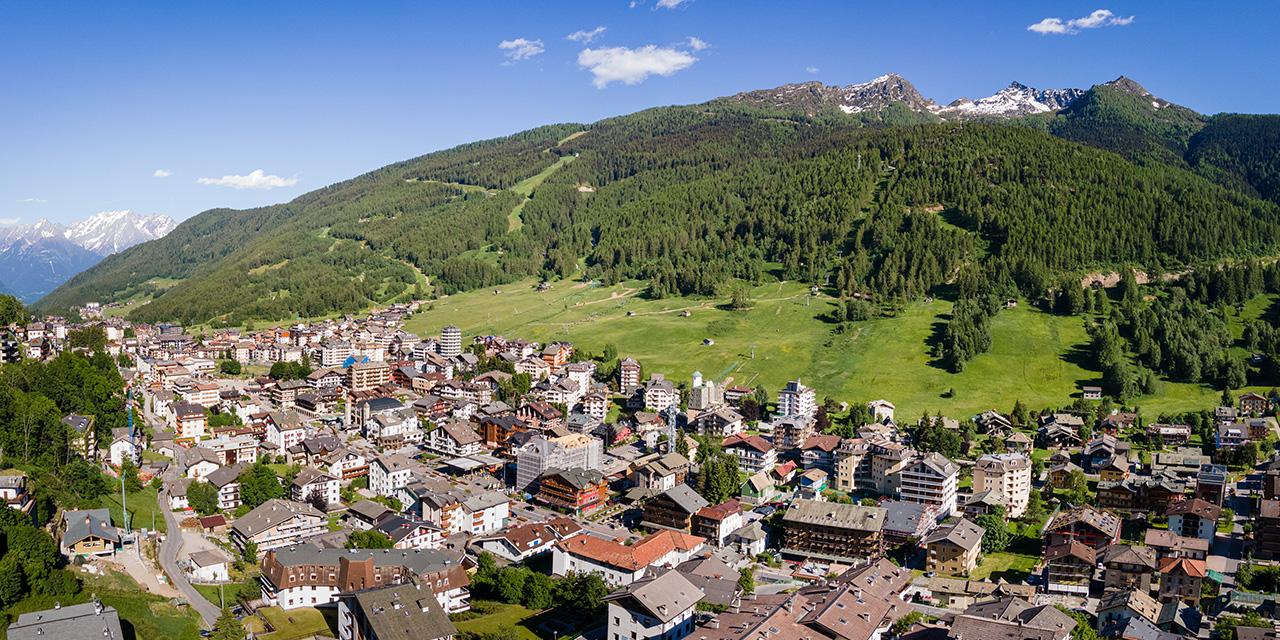 BRIEF DESCRIPTION OF THE ROUTE 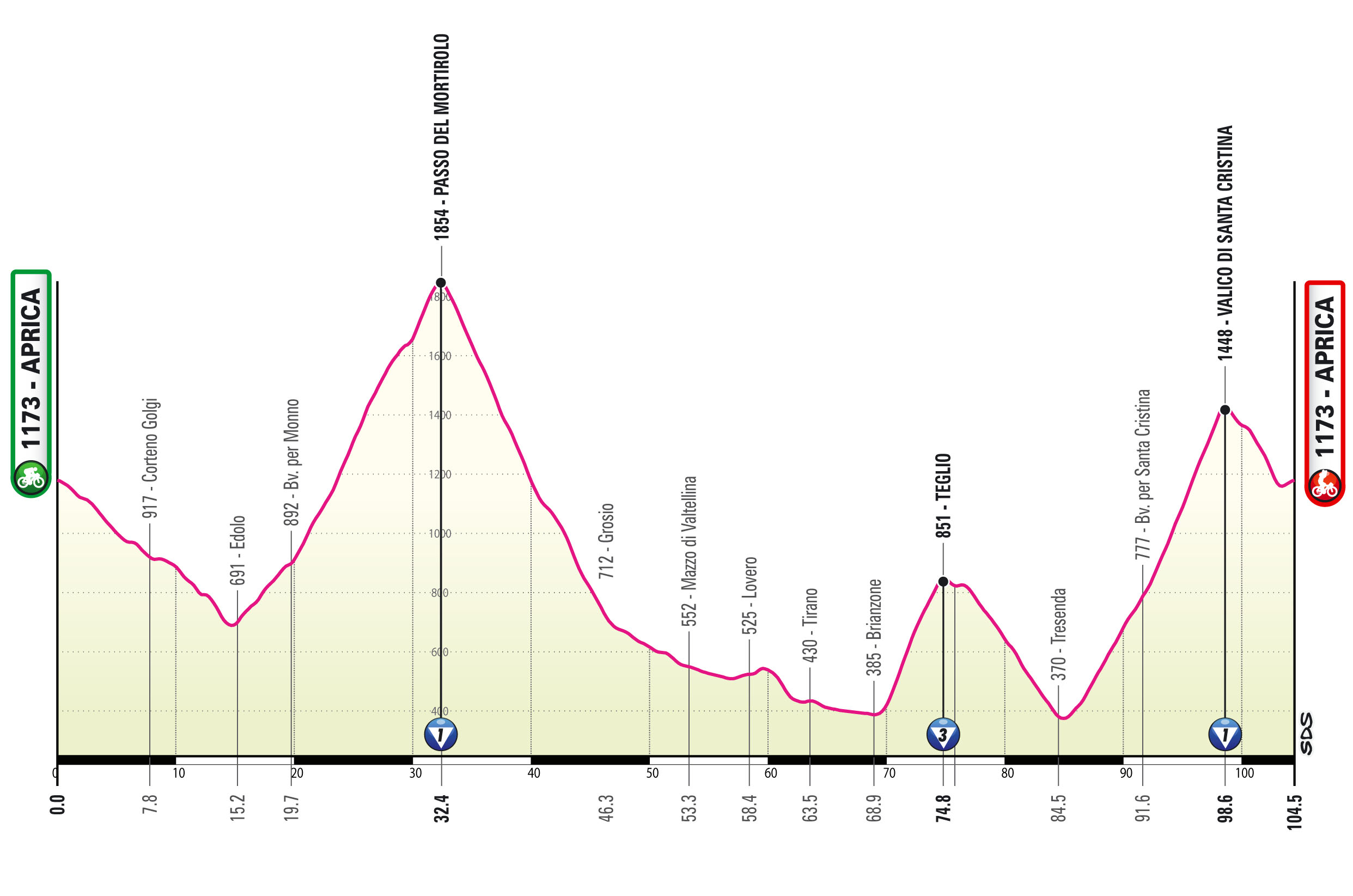 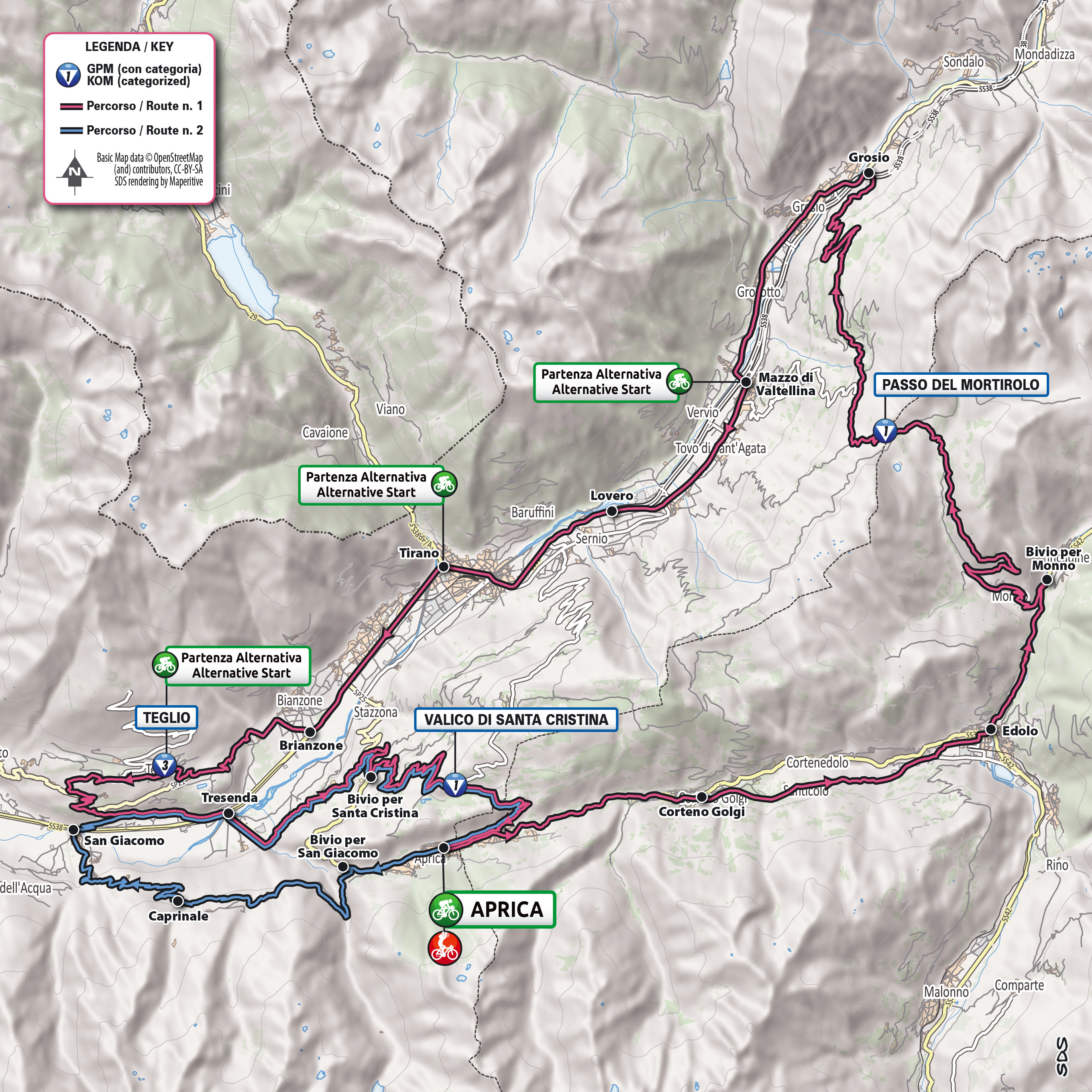 The route sets off from Aprica and immediately takes in a fast-rolling descent on a busy road (trucks and busses) down to Corteno Golgi, where you leave the ss.39 and ride first toward Corteno and then, passing through Santicolo, you reach Edolo.
From Edolo to the junction for Monno you must ride along the ss.42 all the way to the junction, at the bottom of the climb.
The initial 9km ascent settle at an approx. 8% gradient, then a short false-flat leads to the last 2.5km winding through a succession of hairpin bends at gradients of up to 16-17% before clearing the summit.
Fast-rolling descent down to Grosio. As in summer the very narrow road is full of cyclists and following cars climbing from Mazzo, caution is required.
Past Grosio, the route leads to Tirano along the old road in Valtellina (as far as possible).
At Bianzone the route negotiates the Teglio climb on a steep and narrow road, similar to the road heading to Mortirolo.
Fast-rolling descent all the way down to Tresenda (mind the level crossing that sometimes causes a traffic jam), where the final ascent starts. The road (with two short tunnels in the initial part) is wide and winding up to the junction for Santa Cristina, where it becomes considerably steeper and narrower. The route climbs through hairpin bends in the woods and reaches the top just before the Trivigno/Aprica junction. A narrow, steep, testing descent leads to 1,500m remaining to the start point. This final section runs on a slight incline.


NOTES:
Teglio, home of the pizzocchero, is the town that gives its name to the entire valley (Val Teglina, which later became Valtellina).
In Tirano, just before the Sanctuary, you cross the Bernina railway. Mind the traffic lights there, as there are no barriers

ROUTE CHANGES DURING YOUR RIDE:
If you have some difficulty, you can ride from Tirano directly to Stazzona and climb up all the way to Aprica along the ordinary road, cutting out the steep Santa Cristina slopes.
Past Monno, you can pick a gruelling variant, the so-called Recta Contador (since the Spanish champion inaugurated it). You take the old road/mule track (2.9km / 13.2% average gradient) that cuts across the route to the base of the final hairpin bends. Bear in mind that this is a very narrow road where it is difficult for a car to pass even a bicycle, with some undulations that bring the average gradient up to 15% for much of the route and the max. gradient very close to 30%.

Are you ready to ride
with Komoot?

Teglio is the municipality, in the province of Sondrio in the Rhaetian Alps, which gives its name to Valtellina. Its centre is about 900m above sea level on a sunny and panoramic area, a position that has earned it strategic importance in the past.

Next to the road sign in Teglio, another plaque represents it as the ‘Homeland of Pizzocchero’, a variety of pasta made from buckwheat flour and dressed with potatoes, savoy cabbage or chard, depending on the season, Valtellina Casera cheese, butter, garlic and sage. 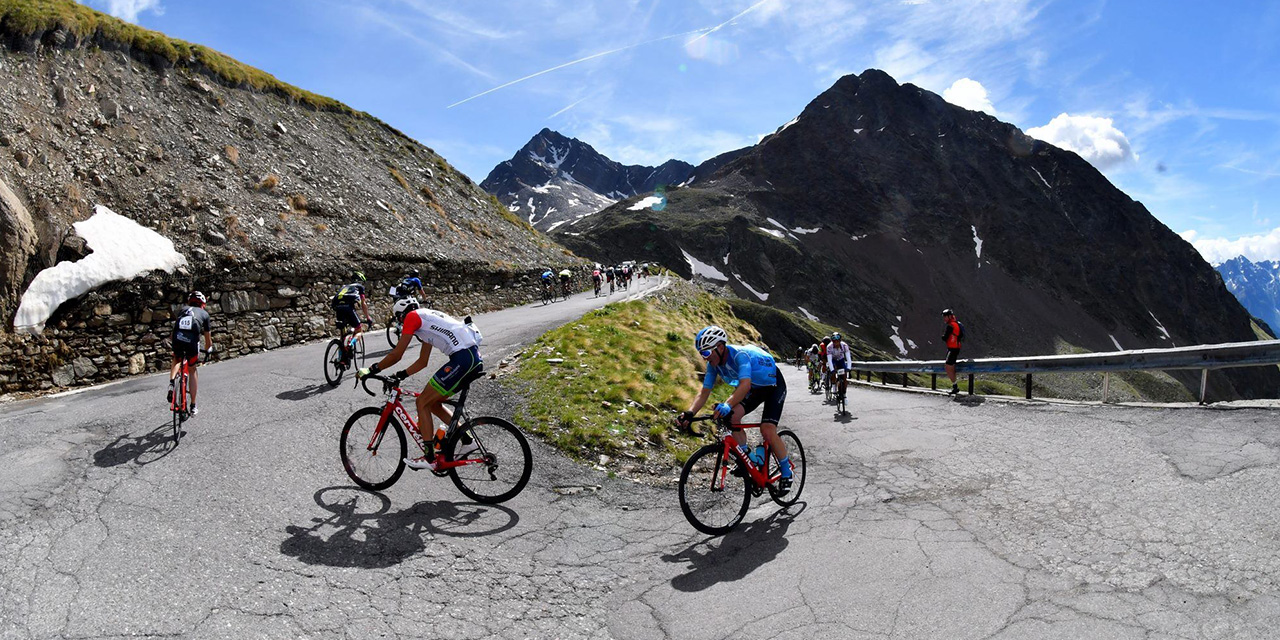 The routes we propose here have been designed for different levels of fitness. They run on roads open to traffic and, although special care has been taken to identify traffic-free roads, the safety of the cyclist is first and foremost the cyclist’s own responsibility.

We emphasize that it is essential to comply with the traffic rules by respecting traffic lights, priorities, avoiding occupying the entire roadway, as well as all the rules that are not only mandatory but also dictated by common sense. Remember that to be respected by others, it is essential to respect others.

In case of existing cycle paths, even if they are not mentioned in the text, it is mandatory, under the traffic rules, to use them. In the creation of the GPS tracks of these routes, the greatest care has been taken to use existing cycle paths. However, it is possible that the tracks are sometimes not matching them because the cyclie paths are extremely close to the motorway or have been recently created and did not exist at the time of designing the routes. Many of the cycle paths are shared with pedestrians who, although they can sometimes be unruly and invasive, are the weak link in the chain, just as the bicycle is weak in relation to cars on the road. Therefore, please mind the pedestrians.

The roads indicated are normally open to traffic and the cyclist does not have any right of way other than that provided for in the traffic rules. It is therefore advisable, particularly when rolling downhill, not to force crossings and/or run unnecessary risks. Even if you are in the right, in the event of an accident with a motor vehicle, it is always the cyclist who gets the worst of it.

It is advisable to use warning lights (possibly flashing) to make your position clear to other road users.

The start locations indicated generally provide parking facilities, but there is no guarantee that parking will be free of charge, that there will be spaces available, or that your vehicle will be safe from break-ins and/or damage.