In Milan, at the RCS MediaGroup headquarters, the President of the Group, Urbano Cairo met with the CEO of Toyota Motor Italia, Mauro Caruccio.

Urbano Cairo, President of RCS MediaGroup said: “The great cycling events like the ones we organize allow us to show the thrill of sport, the charm of landscapes and history, the beauty of cycling to the whole world. “A bike is an efficient vehicle, which has roots in the past and will increasingly be the solution for the future. This is why we are very pleased to continue to collaborate with a world-class brand like Toyota, because with its hybrid and innovative cars it will help us build a responsible and sustainable show once again. We are convinced that our future, that of cycling and beyond, also passes from here. And with Toyota we can continue to build it together.”

“We are extremely happy to have renewed the partnership with RCS MediaGroup and to be able to have our range of electrified vehicles once again the protagonist of the Giro d’Italia, now for the 103rd edition,” said Mauro Caruccio, CEO of Toyota Motor Italia. “This partnership has a twofold value: on the one hand, it testifies to our closeness to the values of the world of sport – passion, challenge, perseverance in overcoming every obstacle – on the other hand it is combined with the Toyota Group’s ambition to contribute to reduce, through the use of its Full Hybrid Electric technology, the environmental impact by promoting innovative sustainable mobility solutions. Looking at the Giro d’Italia, the bicycle embodies the means of sustainable mobility par excellence.” 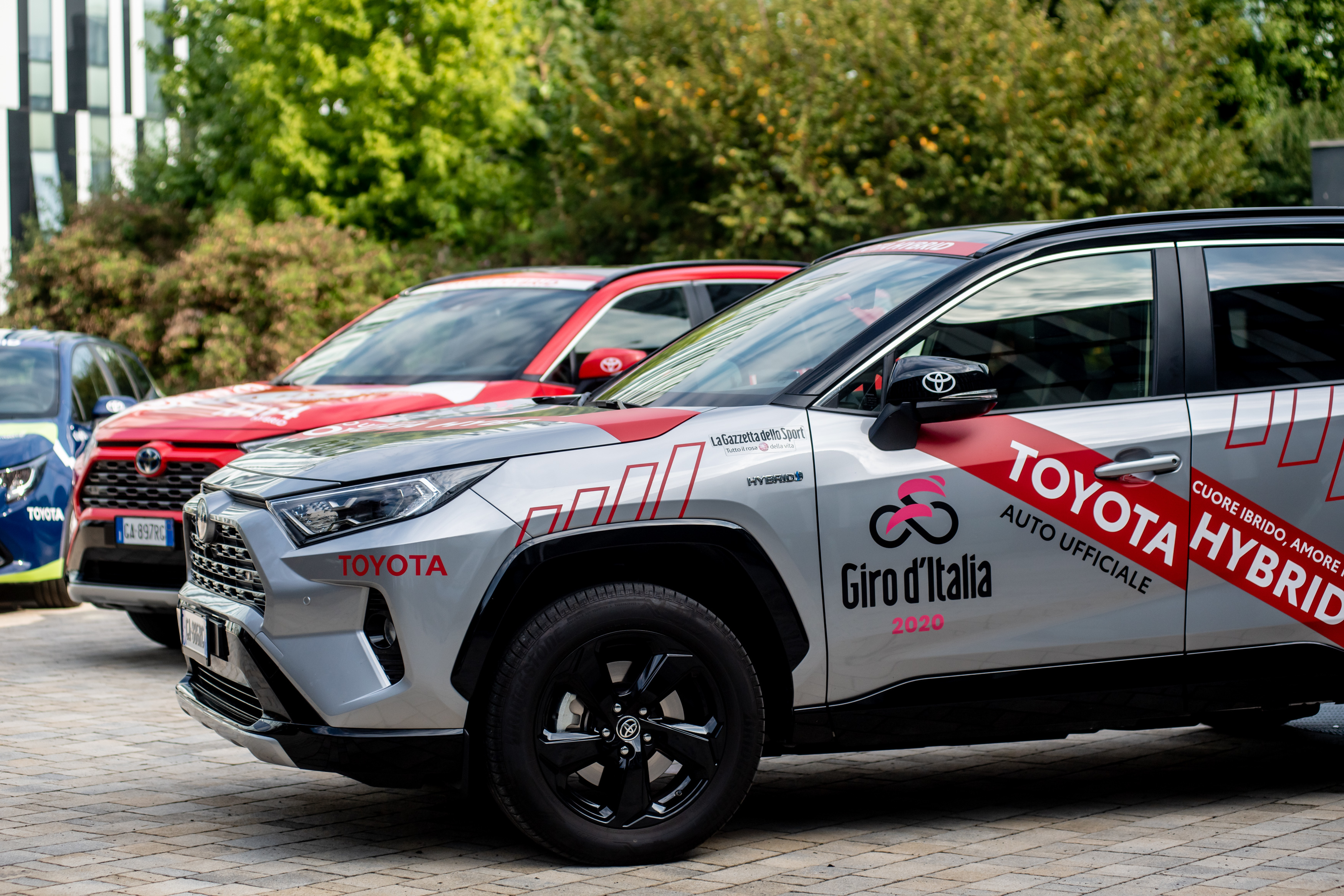 This year Toyota has made a fleet available to the Giro consisting of 43 cars: 37 RAV4 and 6 Corolla Touring Sports. The cars will be equipped with the latest evolution of Toyota’s Full Hybrid Electric technology, now in its fourth generation, capable of combining performance with high energy efficiency and extremely low climate-altering and polluting emissions.

The data collected last year from more than 160,000km showed how the cars traveled in ZEV mode, zero emissions, for more than 50% of the time.

The models involved in the Giro caravan are joined this year by a new protagonist, the new Yaris Hybrid. The new Yaris in the Premiere trim will be exhibited at the start and finish of all the stages where the participants of the event will be able to admire the new car live. The New Yaris will also be the protagonist of the WeHybrid race, which will involve Toyota ambassadors who will guide the Giro route aboard the best hybrid ever: the more they drive electric, the more they will accumulate advantage over the other competitors. All will be monitored by the Hybrid Coach, a function of the MyT app which is able to display the % of time and space traveled in electric mode.

Reinforcing the theme of sustainable mobility, Toyota’s technology could not be expressed more clearly than with its hydrogen car, the Mirai. Three cars will be protagonists of the time trial stages of Palermo (3 October), Conegliano (17 October) and Milan (25 October). The Toyota Mirai is the first hydrogen-powered sedan, produced in series since 2014, which today has over 10,000 cars sold worldwide. The Mirai is an electric-powered car, where electricity is generated on board using hydrogen, and whose only emission is water; it is a car that recharges in 3 minutes and has a range of about 500km.

The Toyota RAV4 Hybrid maintains its unique position on the Italian market thanks to its Full Hybrid/Electric powertrain, underpinned by the first use of a TNGA-K (Toyota New Global Architecture-K) platform that offers a low centre of gravity, optimum weight balance and significantly increased body rigidity, which contribute to superior handling, ride comfort and driving pleasure. Toyota’s fourth generation hybrid system combines a new 2.5 litre engine and a powerful electric motor (88kW) for a maximum output of 218 DIN hp for the FWD version, delivering ample torque at all speeds, responsiveness and efficiency, with best-in-class fuel economy and emissions levels.

Fuel economy starts from 22.2km/l, with CO2 emissions from as low as 100g/km. Nitrogen oxide (NOx) emissions on the FWD version are 3mg/km, 95% lower than the threshold set by current regulations (60mg/km) for Euro6 petrol engines.

The Corolla Touring Sports, thanks to its newly adopted TNGA-C platform, has superior driving dynamics and enhanced stability, handling and agility. The cars that will be driven during the Giro d’Italia will be equipped with the fourth generation 1.8L 122 DIN hp Hybrid powertrain. Fuel consumption and emissions, both polluting and greenhouse gases, are best-in-class: consumption and CO2 emissions are attested for the 1.8L version starting from 30.3 km/l and 76 g/km of CO2 (correlated NEDC data in the combined cycle). The emissions of NOx nitrogen oxides are 3 mg/km, 95% lower than the limit set by the current legislation of 60 mg/km for Euro6 petrol engines. 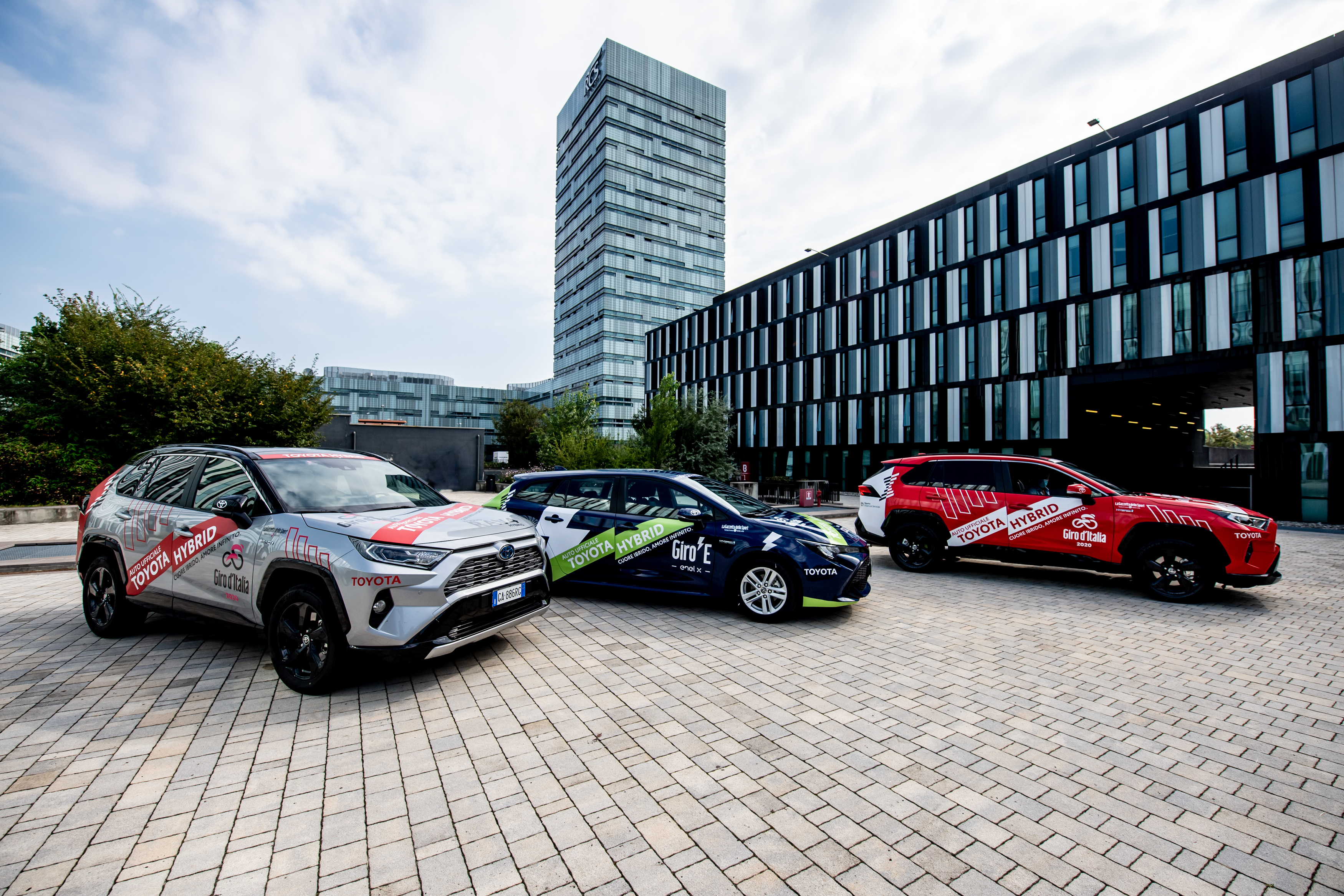