The tour, which started from Turin, has just come to an end in Milan. 920 participants, 21 stages, 9 teams and one time trial.

The third edition of the Giro-E 2021 has come to an end. Participants arrived in Milan after riding 1,477 kilometers and climbing 23,300 meters: their arms raised as they crossed the finish line near the city’s iconic Madonnina. The event, which was organized by RCS Sport, aimed to give amateur cyclists a champion-like experience of the Corsa Rosa, pedalling on the same roads and during the same days of the Giro d’Italia. 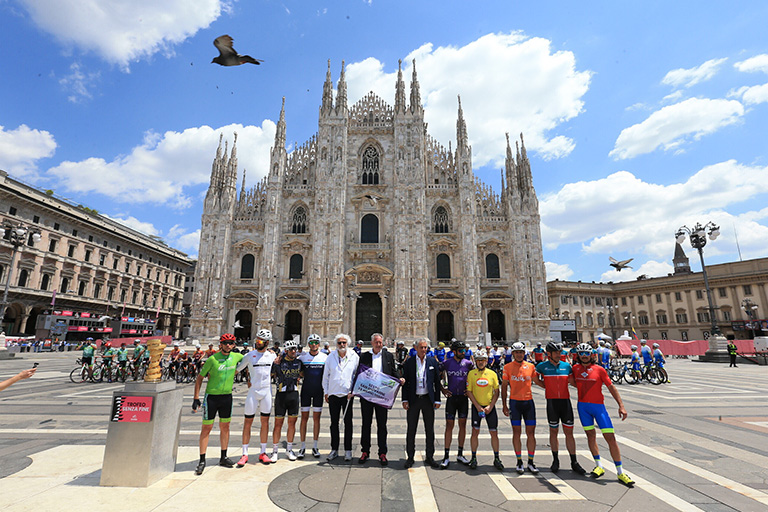 “It was a great Giro-E: as well as promoting sustainable mobility, energy saving and respect for the environment, it brought energy to the cities it passed, which welcomed the event as a chance to celebrate rebirth after the pandemic,” said Roberto Salvador, director of the Giro-E. “A special thanks goes to the start cities, which have done a great job setting up their beautiful roads every day. E-bikes allowed participants to tackle a challenging course, inspired by the one professionals were riding this year – a tough year for all of us.”

There were nine official teams (made up of six riders each) that participated in all stages of the event, though additional “special teams” lined up too for some of the stages, such as Sara Assicurazioni, ECOC-2025 team (‘Nova Gorica e Gorizia Capitale Europea della Cultura 2025’, whose riders completed the Aquileia-Gorizia stage), and the Angelo Croce team (representing the organizing committee of Casalpusterlengo-Stradella). Others, such as the Toyota Team and the RCS Sport team, split up and merged to compete together in some of the stages.

From 8 to 30 May, 21 stages were completed – the same number as the Giro d’Italia – one of which, the very last, was a team time trial. It was a first for the Giro-E: the TTT took place from Sesto San Giovanni to Milan, covering 10.6 legendary kilometers. It took riders almost 30 minutes to go from Sesto’s city center to Piazza Duomo in Milan. The time trial was surely one of the most intense and tough stages of this year’s edition – it certainly wasn’t less challenging than the previous mountain stages in the Dolomites.

The first ten stages, up to the first rest day, were particularly intense, with 790 kilometers of riding and 11,400 meters of elevation gain. The shortest stage overall was Canazei-Cortina d’Ampezzo: only 7 kilometers, as the route was in fact cut down due to bad weather. While the longest stage was Sulmona-Campo Felice: 97.5 kilometer-long. Among mountain stages, the hardest were Maniago-Monte Zoncolan, stage number 14, with 2,700 meters of elevation gain in a single day, and, surprisingly, Trento-Sega di Ala too (it was an unprecedented arrival for the Giro), where riders tackled the most challenging climb of this year’s edition: the climb to Sega di Ala. Still, there were also five pan-flat stages to contend with.

The Giro-E has also been a chance to showcase ‘Made in Italy’ values and products. E-bikes were a great way of discovering the Italian knowledge of electric motors and its work in the motorcycle and automotive fields for example. The event has also been a chance to shine a light on a beautiful land, passing through some of the most picturesque and lesser-known spots in the ‘Bel Paese’. Many of these are more than worth a mention: Turin, Italy’ first capital city, Milan, the country’s financial centre, Faenza, a beautiful and sunny city in Romagna – an ideal starting point to reach Montepulciano by bike – and then Ostiglia, Maniago, Aquileia, Rieti… and many more – it’s hard to keep count!