Filippo Ganna got a fright when he punctured in the last few kilometers of the closing time trial from Senago to Milan (Piazza Duomo), but after a quick bike change, the world champion still managed to win the stage with an advantage of 12’’ over French national champion Rémi Cavagna, who himself crashed on the final corner. Edoardo Affini rounded out the podium.

Runner up Damiano Caruso rode the fastest of the top 3 riders in the GC to complete the 104th Giro d’Italia with a deficit of 1’29’’ from overall winner Egan Bernal, who won the Corsa Rosa at his first attempt at the age of 24. Simon Yates defended his third place overall, finishing at 4’15’’. Aleksandr Vlasov remained fourth while Daniel Martinez and Joao Almeida moved up to fifth and sixth respectively with the same time overall. 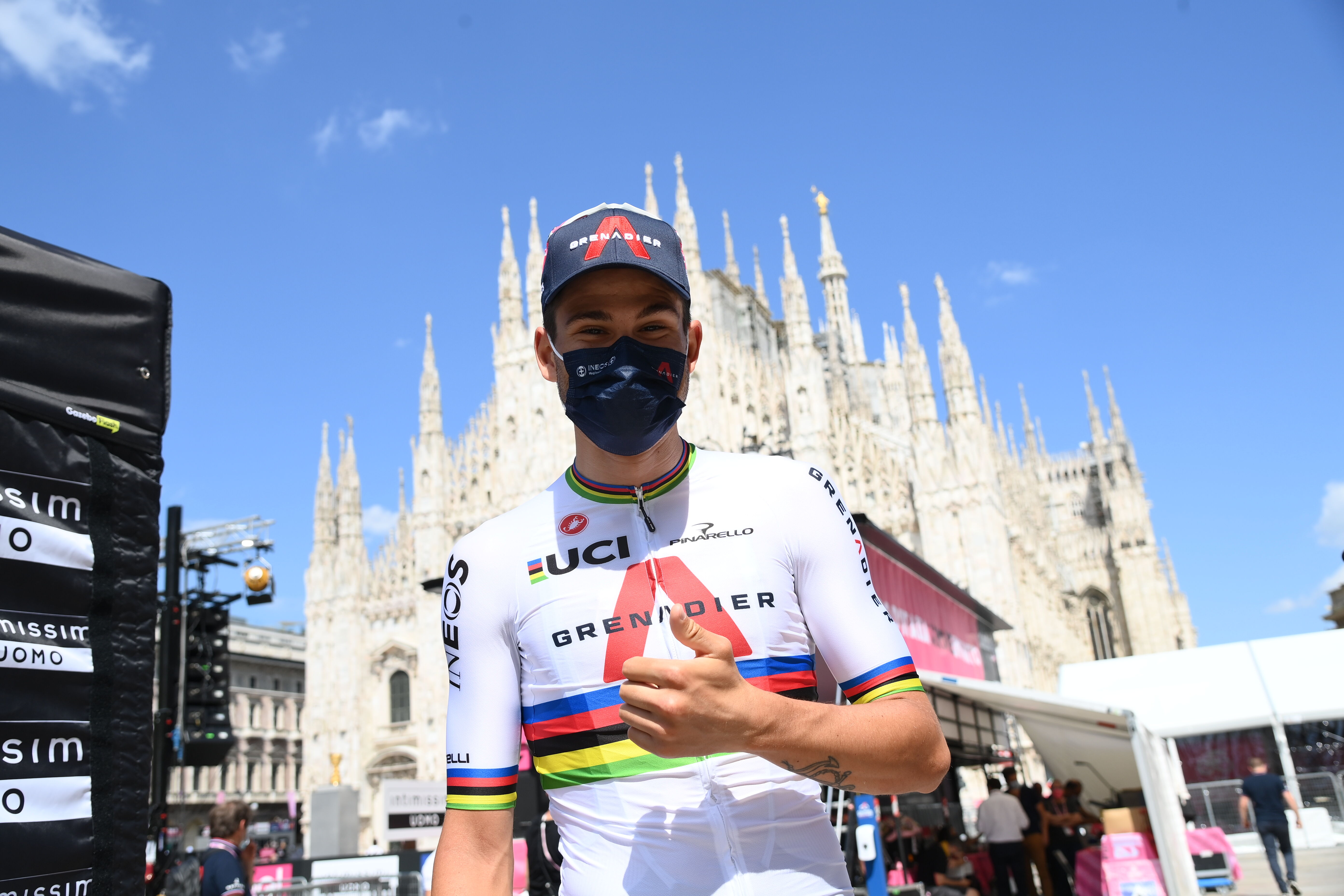 Filippo Ganna is the first rider to win five consecutive time trials at the Giro d’Italia (3 in 2020, 2 in 2021). He scored the 7th Italian stage win this year. The last Giro with more Italian stage wins than this one was in 2015 (9).

Egan Bernal is the first rider to win the Giro with bib number 1 since Miguel Indurain who wore it as the defending champion in 1993.

Egan Bernal is the fourth rider to win both the Maglia Rosa and Maglia Bianca after Evgeni Berzin in 1994, Nairo Quintana in 2014 and Tao Geoghegan Hart in 2020.

Maglia Rosa and overall winner Egan Bernal said: “Winning the Giro puts me in a wonderful situation. I’m quiet but inside, I feel an explosion of happiness. Nowadays I’m riding at an excellent level that enabled me to win the Giro but I have to keep my feet on the ground. There are other riders who are also very strong. Thanks to them I’ll find some fresh motivation for the future. The most difficult moment of the Giro was yesterday when Caruso rode away. I had five teammates around me but suddenly they were down to just three. Luckily Jonathan Castroviejo made the right decisions at the right time. The most beautiful moment of the race came from riding strongly on the gravelled roads to Montalcino. Today, listening to the voice of my coach [Mikel Artetxe] during the time trial was another beautiful moment. I’ll remember it in the years to come. My team manager Dave Brailsford also has played a big part in this victory. I went through difficult times after I won the Tour de France. With this Giro, I have again found what I was aiming for.”

Runner up Damiano Caruso said: “It’s my first time on the podium of a Grand Tour and it is a beautiful feeling. This podium may not have been foreseeable at the start because we had other plans, but day after day the awareness dawned on me that I might be able to do something big, and today I’m here celebrating this podium. Today, it was only right to prepare to ride the stage and finish it to the best of my abilities and with complete commitment, as I have all the way through the past three weeks. I wanted to do well. I didn’t think of the gap, I just thought about pushing as hard as I could, and now I’ll celebrate. We’ll see what comes next. We’ll enjoy this moment and then think about the future.”

Third in GC, Simon Yates said: “I came up against two guys who were much better than me, and this was the best I could do. So of course I’m very happy. Winning a Grand Tour is not an easy feat and I’m very proud of what I’ve done. I’ll be back to try again, but we’ll enjoy this success for now. It’s hard to say what my favorite moment was, I mean, of course my stage win was the best by a mile. I really enjoyed that. The team put a lot of hard work into that stage as well, so to enjoy that with them was a pleasure. And the day I was the worst was Stage 16 in the rain and the snow there. Look, you can’t be good for three weeks, I don’t think anybody can, and I did my best. I enjoyed the Giro. I did the best I could, I’m really happy with the podium, but of course I would always like to do better, so one year in the future I’ll come back and try again.”

The Maglia Azzurra Geoffrey Bouchard said: “It’s wonderful to live through moments like this. I appreciate the moment more than at the Vuelta, I was very tense then. Here, I’m very relaxed and happy. Perhaps, I have one or two technical things missing compared with other riders because I turned pro very late, but my physical qualities allow me to shine in this category over three weeks. Twice I’ve been able to compete in the mountains competition. It’s a real achievement. I’m super happy. It’s a classification I’ve dreamed about since I was a child.”

Speaking at the press conference, the stage winner Filippo Ganna said: “With the puncture, we spiced up the race! Thanks to the team though, I got a fast bike change. It’s the icing on the cake to bring this second time trial win at home along with Egan’s Maglia Rosa. Three weeks of racing bring a lot of suffering but when your captain raises their arms up in the air on the last day, it already makes you look forward to 2022. As a domestique, it’s our second win out of two Grand Tours after last year’s Giro, it’s a similar achievement to Gianni Moscon who has five out of five. Last year, Tao [Geoghegan Hart] took the Maglia Rosa on the last day whereas this time, Egan took it early so we had to work much more at the front of the peloton. Having said that, I’ve also enjoyed sharing the moment with many more fans on the road side than last year. It’s been a wonderful three weeks.”