Taco van der Hoorn wins stage 3 of the Giro d'Italia from a breakaway even he did not believe in.

Taco van der Hoorn spent two years at Jumbo Visma and says he enjoyed working as a domestique for Wout Van Aert, but at Intermarché-Wanty-Gobert Matériaux he was promised more freedom.

Freedom? Did no one tell him they can monitor core temperature and blood sugar real time, and correlate them to power output? Or that, in any case, work rates are compared on screen to prove the futility of breaking away when, in the belly of the peloton, a few tens of watts are enough to match the straining fugitives? That swarms of all-seeing, geostationary satellites hover overhead, collecting data points, and relaying the position of every rider to technicians on the ground, who calculate convergence rates? In short, there is no hiding place, nothing is left to chance, there is no freedom?

It is called nomolatry, or code fetishism, the belief – in life as in sport – that the world, in its infinite variety, can be gathered into a single code which will tell us how to act in every situation. It dumbs us down.

Today’s eight-man breakaway must have been full of sceptics. Vincenzo Albanese and his Eolo-Kometa teammate Samuele Rivi, 23 tomorrow, were there to snaffle mountain points to secure the Maglia Azzurra for as long as possible. Simon Pellaud and his 18 year old Androni Giocattoli – Sidermec protége Andrii Ponomar, like Bardiani’s Samuele Zoccarato, were there to earn breakaway kilometres towards the Fuga Bianchi prize, and points towards the comabitivity prize at the intermediate sprints and categorised climbs. AG2R Citroen, Groupama and Intermarché, three underachieving WorldTour formations with either a sprinter nor a GC leader, sent riders up the road to look for inspiration.

With 50 km to go, Bora-Hansgrohe moved to the front of the peloton en bloc, bent on repeating the tactics that did not work at the 2020 Tour de France: setting a pace so high that the sprinters could not follow, but working the team so hard that there would be no one left to help Peter Sagan in the final kilometre. Sagan did excellently to finish second in the sprint behind Davide Cimolai. But the sprint was for second place: ahead of it, Taco van der Hoorn had found the inspiration he was looking for. After abstaining from the battle for points at the various sprints and climbs along the way, he set off after the irrepressible Swiss-Colombian Simon Pellaud on the climb up to the final intermediate sprint at Guarene, worked with him until there were 7 km to go, then darted away. 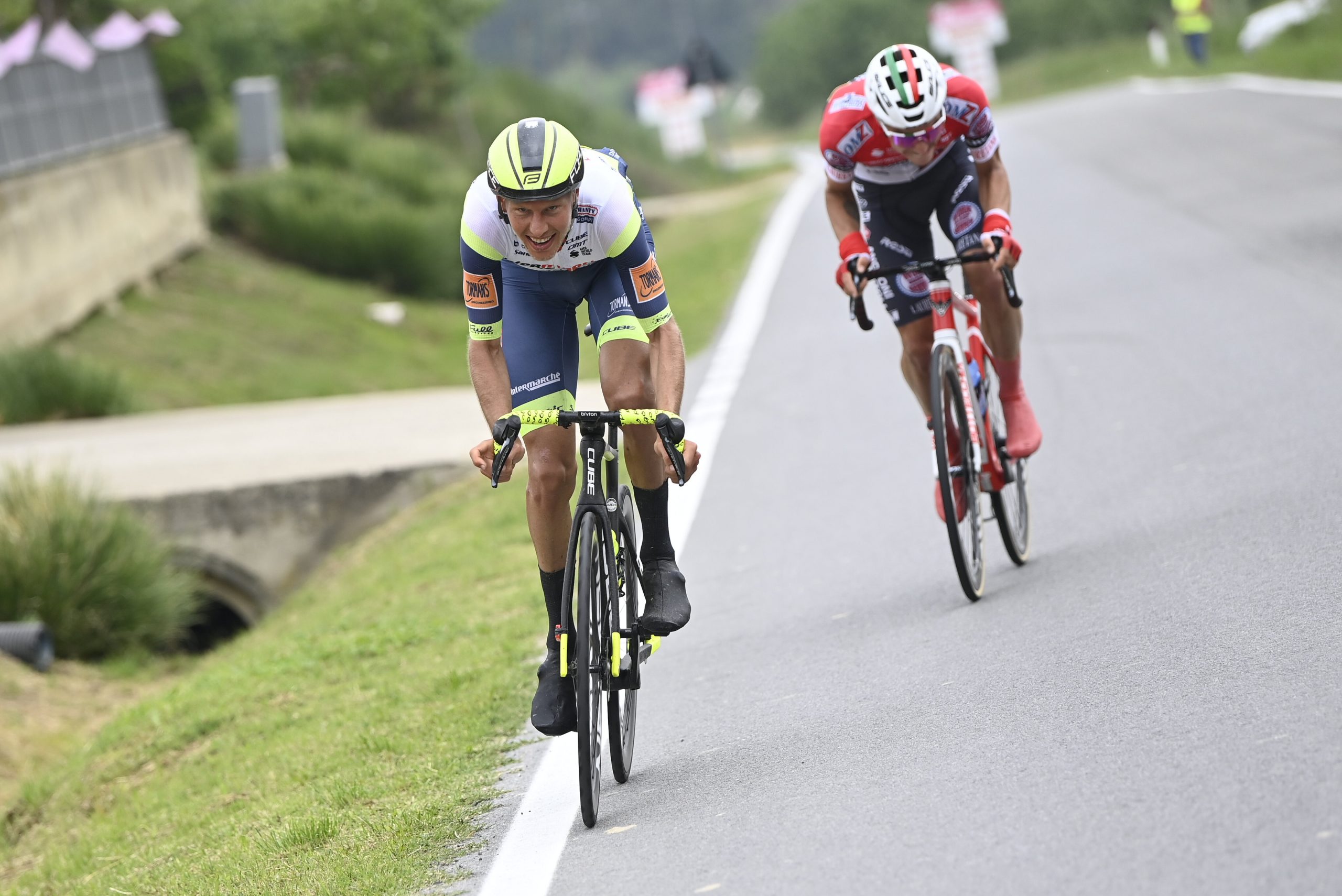 “I’m a bit heavier and I think my aero position was a bit better, so I could… he was tired and I dropped him and then I leaarned on the radio that I still had 40” or something and I went full gas to the line. I couldn’t believe it.”

With one kilometre to go, and an advantage of 14”, with the peloton on his wheel, he discovered, in the exhausted suspension of his disbelief, a source of strength unavailable to riders who have spent all stage riding tactically and saving their legs, as the code dictates: a righteous anger, a sweary, irreverent self-assurance: “With one kilometre to go, I was looking behind and I was thinking, “Oh f***!” I’m going to make it, what the f***!”