Stage description of stage 7 of the 2021 Giro d'Italia, won by Caleb Ewan (Lotto Soudal) in a stage along Italy's beautiful "Costa dei Trabocchi". Fernando Gaviria (UAE Team Emirates) tries to foil him with an early sprint, but the Australian takes his second stage win so far.

In 1862, Torino, 128.6 km into today’s stage on the Adriatic coast, added the name of the local river to its name and became Torino di Sangro, to avoid confusion with the newly adopted capital of the newborn nation state, Italy. The intermediate sprints and categorised climbs at the Giro d’Italia that started in Torino suffer something of the same Doppelganger-ish uncanny. Before the first intermediate sprint at Crecchio, Peter Sagan and Daniel Oss made a mischievous attack to pick up the 5 Maglia Ciclamino points awarded for 4th place, behind the three leaders, who had no interest at all in the Maglia Ciclamino, but wanted the Traguardi Volanti (intermediate sprint competition) and Combattivitá points. As it happened, Simon Pellaud, who had moved ahead of Vincenzo Albanese at the top of the Fuga Bianchi breakaway competition after 25 km of the stage, picked up enough of each to take the lead in both competitions, despite losing the sprint to the Umberto Marengo. If he could have left the Maglia Ciclamino points for Sagan, he probably would have done, especially if a small fee had been involved. But, unlike Torino in Piedmont and Torino in Abruzzo, the categories are melded together. There is no separating them. There is no opting out.

Surrounded by all the broadcast paraphernalia of modern cycling – the TV motos, the helicopters – The three breakaway riders (the trio completed by the Manxman Mark Christian) sped along the newly rebranded “Costa dei Trabocchi”, spreading the good news of its tourist potential. The “trabocco” – apparently, it is translated as “trebuchet” – is a wooden construction platform jutting out into the sea afrom which extend, suspended a few metres from the water, two long, catapult-like arms (called antennas), which manipulate a huge, narrow-mesh fishing net called a “trabocchetto.” Modernity can never wait to humiliate such old-fashioned technologies with new-fangled, hi-tech alternatives, but when it wants our attention, and the cash we spend outside our productive lives, nothing works like the past: we somehow see the better part of ourselves in it. And – strange, this – the underlying design concept still catches our imagination. 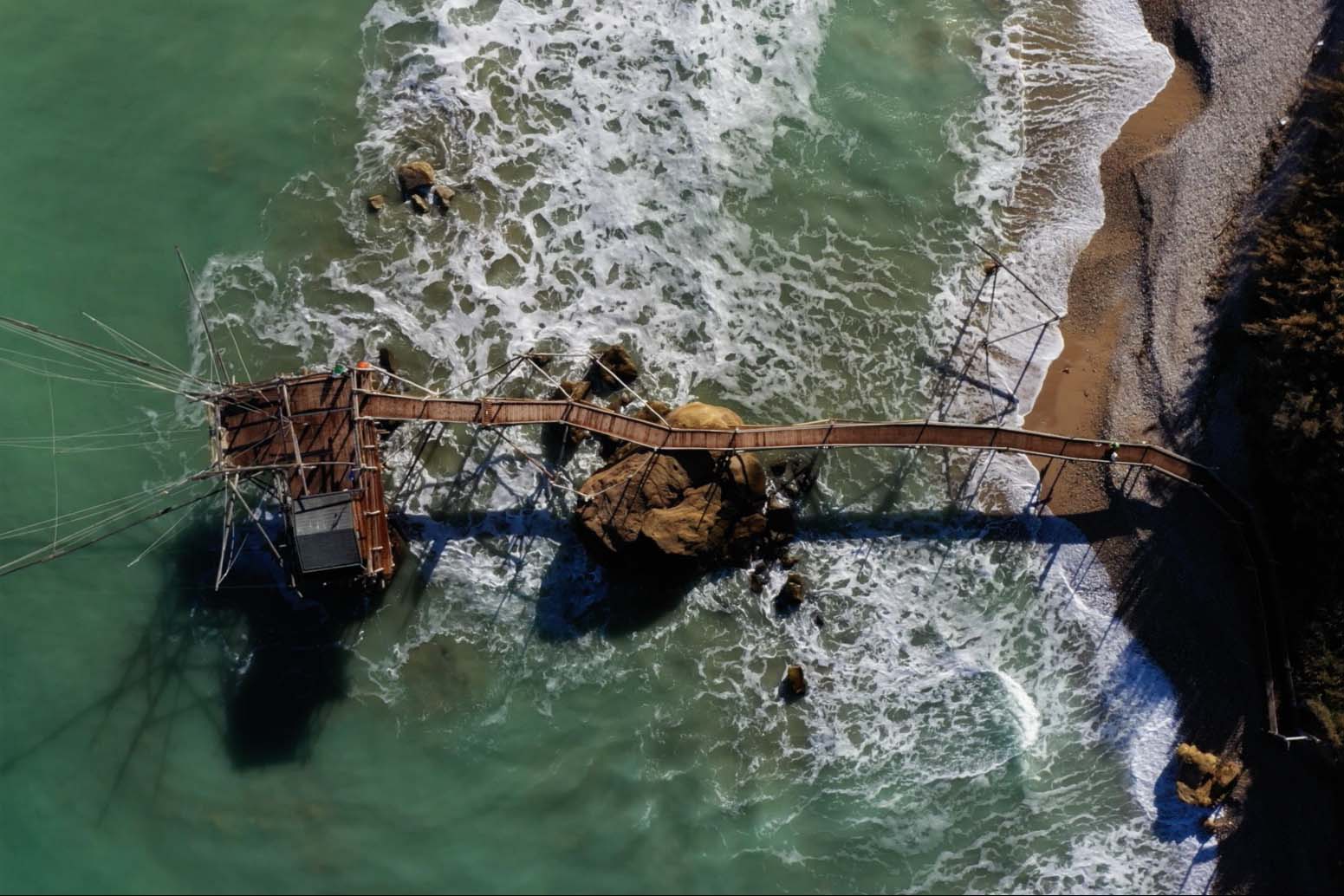 In one of his columns in L’Espresso magazine, Umberto Eco once wrote about elementary forms of technology like this. Funnily enough, one of them, in his typology, was the bicycle:

“The book belongs to those miracles of eternal technology like the wheel, the knife, the spoon, the hammer, the pot and the bicycle . The knife was invented very early, the bicycle very late. But no matter how hard designers try, modifying a few details, the essence of the knife remains the same. There are machines to replace the hammer, but for certain things you will always need something that resembles the first hammer that ever appeared on the crust of the earth. You can invent a very sophisticated gear system, but the bicycle remains what it is, two wheels, a saddle, and pedals. Otherwise it’s called a moped and that’s another matter.”

Or you can put Caleb Ewan on one, and it becomes a motorbike. His winning sprint was the perfectly realised embodiment of an underlying plan.

“I had all my guys there from a long way out, because there was a few points in the last 10 km when we really needed to be at the front, so we didn’t have to brake or anything. The most important point for me, I told them, was the start of the climb, because, if I got a free run there, then I’d save a lot of energy.”

Despite Fernando Gaviria’s brilliant attempt to foil the plan with an early sprint, it worked to perfection.