The new Maglia Azzurra, a tribute to Ennio Doris and Gianni Motta's induction to the Hall of Fame

The event celebrating the 20-year partnership between Banca Mediolanum and the Giro d’Italia took place at the Arcimboldi Theatre in Milan.

The new Maglia Azzurra was unveiled during the soirée. This year, the jersey is dedicated to the memory of Ennio Doris, a passionate enthusiast and a real connoisseur of cycling and of its legendary narration. His most famous quote, “C’è anche domani”, an ode to optimism, which roughly translates as “there’s still tomorrow”, is embroidered on the collar of the jersey as a way to immortalize his considerable legacy.

The Maglia Azzurra – designed by Castelli, and made from high-performance fabric manufactured by Sitip – will be awarded to the best climber of the Giro d’Italia who will reach the finish line in Verona, on May 29.

The event, hosted by Barbara Pedrotti and Jury Chechi, reached a peak when Gianni Motta – Banca Mediolanum’s celebrity spokesperson at the Giro d’Italia – was presented with the Hall of Fame trophy for his 1966 Giro victory, which rightfully secured his place in the pantheon of cycling greats. 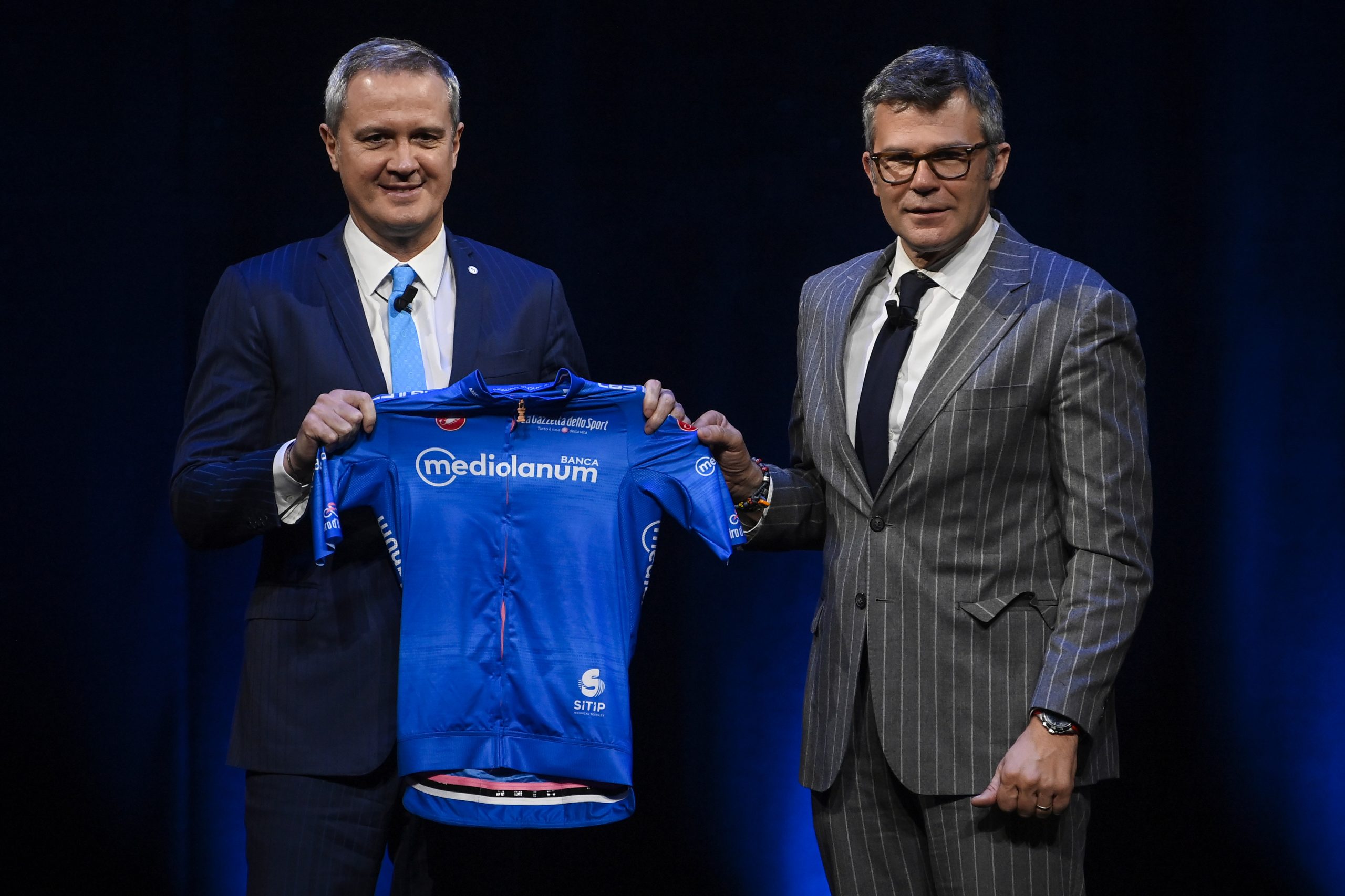 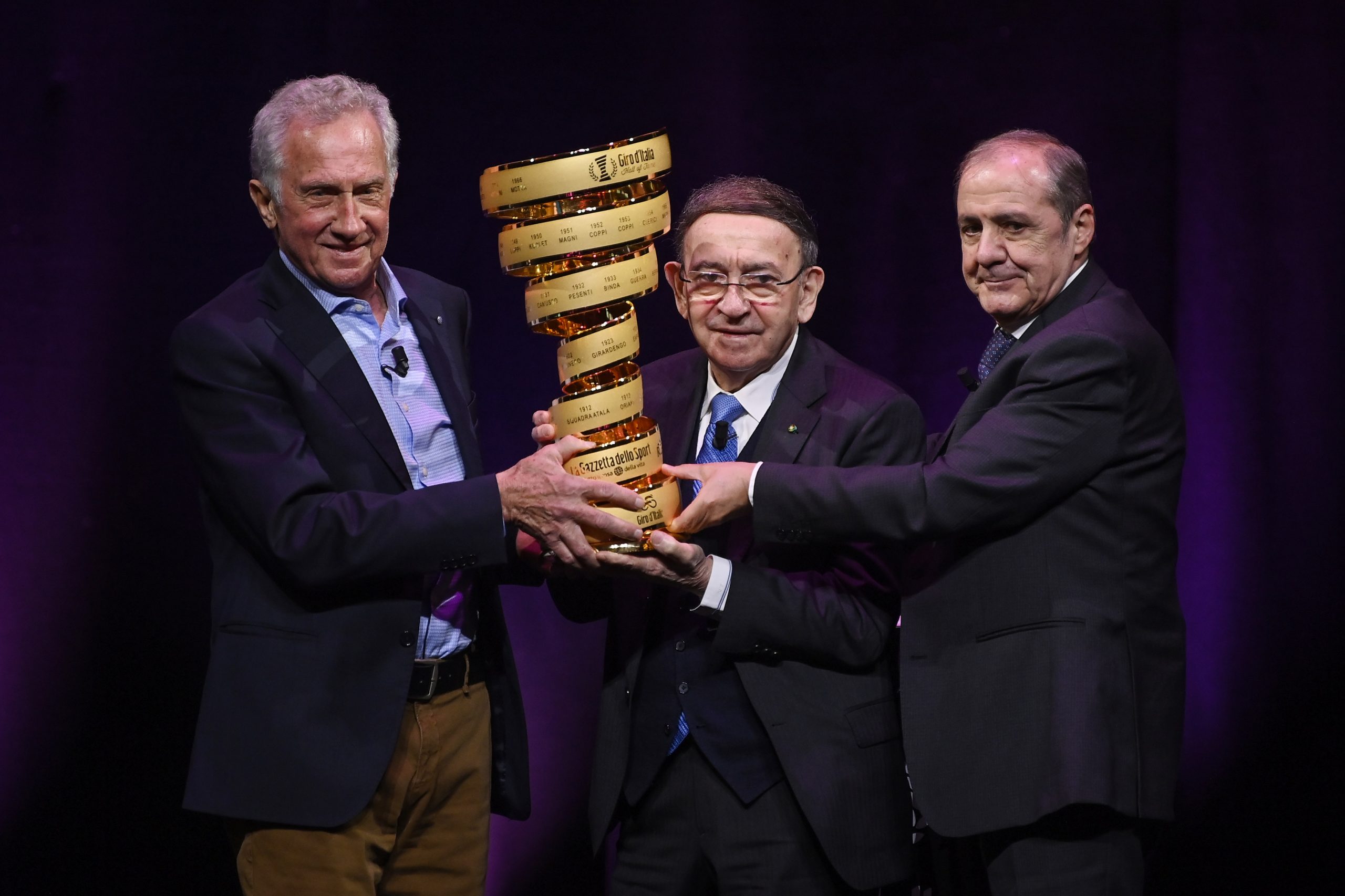 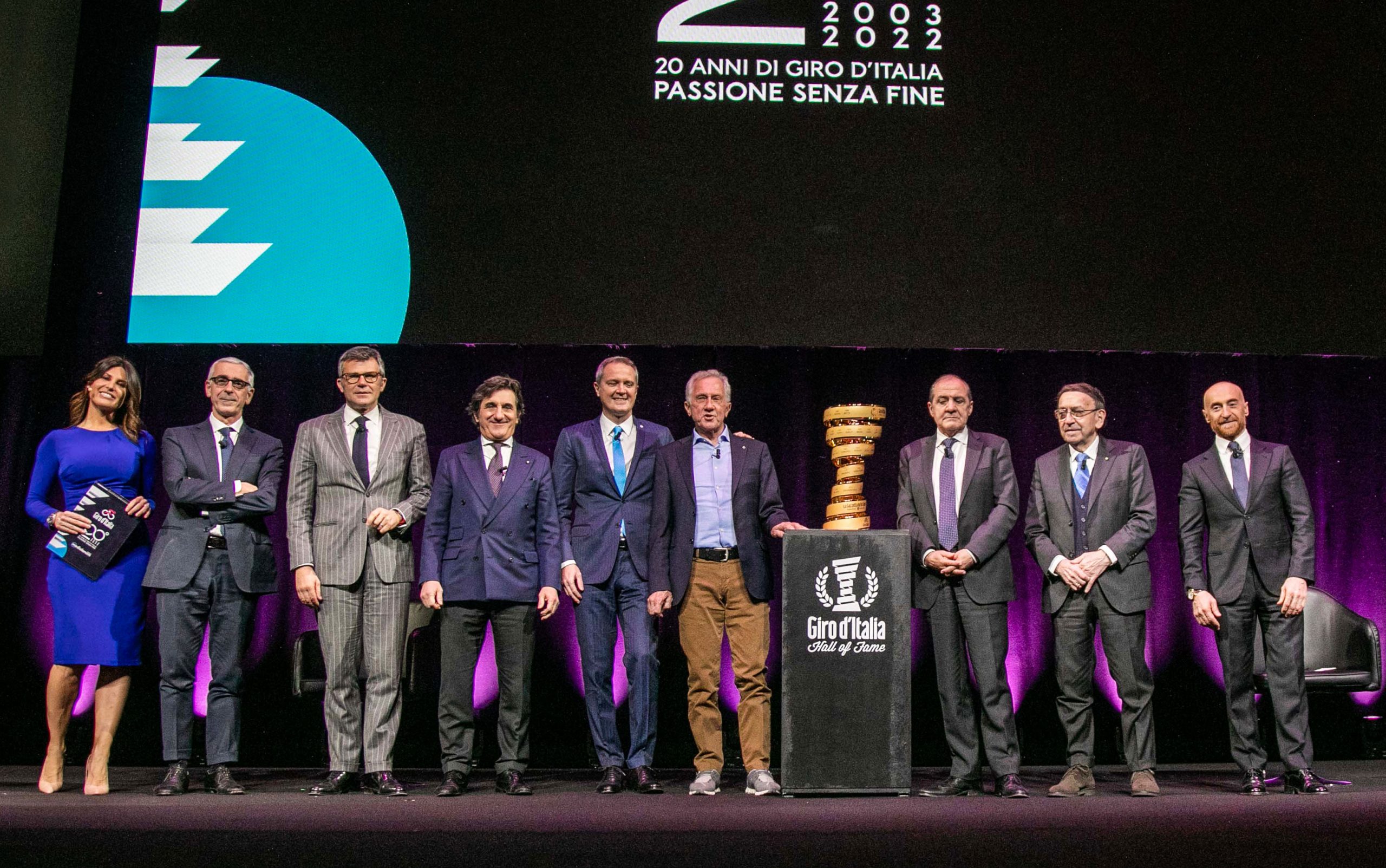 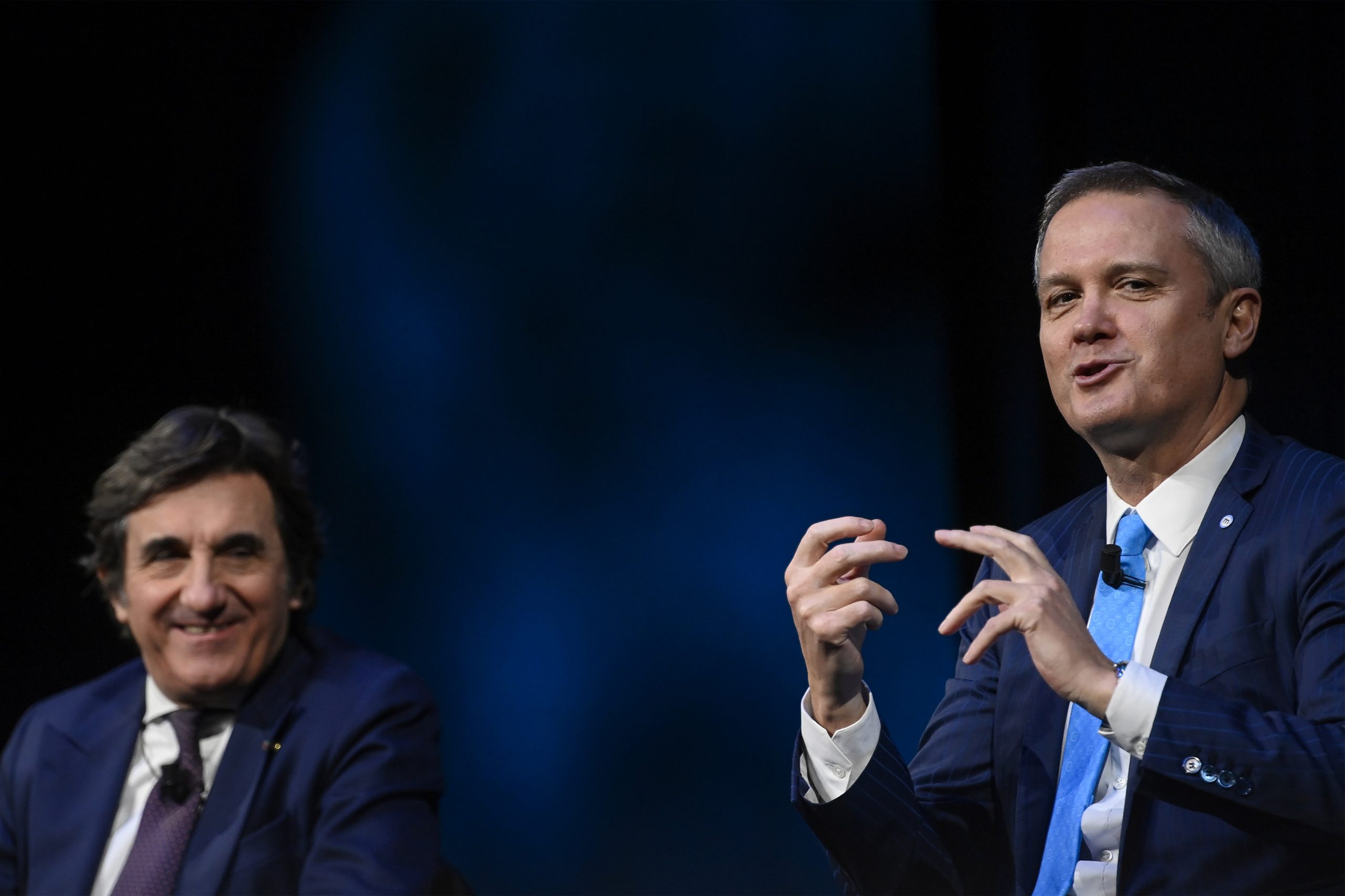 Urbano Cairo, President of RCS MediaGroup: “I have fond memories of Ennio Doris. He was a real optimist, and a life enthusiast. Everything would turn to positive with him. His bank was an incredible accomplishment. He was an outstanding, forward-thinking entrepreneur, a visionary. He could always tell passion from investment. Twenty years ago, he had a sense that the Giro d’Italia could be a very effective means of communication, and he decided to invest in advertising. His choice served as a trailblazer and incentive for many other companies who later began partnering with the Corsa Rosa.”

Massimo Doris, CEO of Banca Mediolanum: “The bond between Banca Mediolanum and the Maglia Azzurra lies in the set of values that we share with this sport, with the Giro d’Italia and with this jersey. This jersey – awarded to the best climber of the race – is the epitome of effort, passion and endurance. It is evocative of extraordinary feats on the Alps and on the Dolomites. It embodies the strength of one and the power of teamwork. The same set of values that we at Banca Mediolanum are based on, and which we believe in. Besides having a strong passion for cycling, we’ve seized a wonderful chance and we’ve been working together for 20 years now. Banca Mediolanum and the Giro d’Italia complement each other. The unique features of the Giro blend well with our business model, and with the way we communicate and interact with people, be they existing clients or prospects.”

Paolo Bellino, CEO of RCS Sport: “The Hall of Fame is a very important award for us. Every year, it recalls the great champions and the memorable tales that the Giro has always told. This year’s edition is particularly dear to us, as we salute Ennio Doris, one of the greatest cycling experts and enthusiasts. Banca Mediolanum began partnering with us 20 years ago thanks to him. We’ve had the same goals and values from the outset, and to date, Banca Mediolanum has become a real member of our family. It is our longest-standing partner. We have grown a lot together during this time, and I am sure we’ll be growing even more.”

Mauro Vegni, Director of the Giro d’Italia: “The Maglia Azzurra has always fired up the imagination of cycling enthusiasts, because it is often contended on the most legendary climbs of the Giro, and because you need skills, sacrifice and selflessness to win it. These unique traits and abilities are common to all the winners in our Hall of Fame, where Gianni Motta will be sitting as of this year. Having had to stand up to supreme champions such as Gimondi and Merckx throughout his career, what he achieved by winning the 1966 Giro d’Italia was no minor feat.”

Gianni Motta, former racing cyclist, and winner of the 2022 Giro d’Italia Hall of Fame: “Entering the Giro d’Italia Hall of Fame is immensely exciting. I am especially glad that they actually thought of me, and I think I deserved it. The Giro d’Italia is only over when you cross the finish line at the last stage. The day I didn’t lose the Giro was in the Chianciano-Roma stage. A break had escaped with many of the strongest riders, but we managed to catch up eventually. The day I won the Giro, instead, was in the stage that featured the Vetriolo climb, and that finished in Levico Terme. That day, I was poised and cold blooded enough to suppress the excitement. I didn’t follow the attackers uphill. Rather, I waited for the right moment, I jumped across to them along the descent, and I ultimately took the stage. I would like to thank all my former team-mates, my team manager Giorgio Albani, and Ernesto Colnago, for supporting me, and for being at my side throughout the 1966 Giro.”

Gianni Rovelli, Head of Communication, Marketing and Digital Channels: “This is the most prominent popular event in Italy, with millions of fans and cycling enthusiasts swarming the streets throughout the country. The Giro d’Italia travels the territory, interacting with the people. Likewise, our family bankers reach out directly to our customers, going over to their place. As the Giro changes route every year, moreover, we can reach out to all our customers and increasingly meet new people, to show them the way we do business, and to offer them the thrill and emotion that this sport, alone, can convey. Over the past 20 years, we have engaged in continuously innovating this winning formula, and we have provided an ever-extending range of experiences to our clients, somewhat creating a Giro within the Giro.”