Starting from Lido di Camaiore, ‘The Race of the Two Seas’ promises three stages for the sprinters, two for the finisseurs (including the brutal ‘Muri’ of Castelfidardo), a summit finish at Prati di Tivo and a refresh for the traditional final time trial in San Benedetto del Tronto. Read on for a message from Vincenzo Nibali below.

From 10th to 16th March, the 56th edition of the Tirreno-Adriatico will visit 5 regions of central Italy over the course of the seven stage race – Tuscany, Umbria, Lazio, Abruzzo and Le Marche. 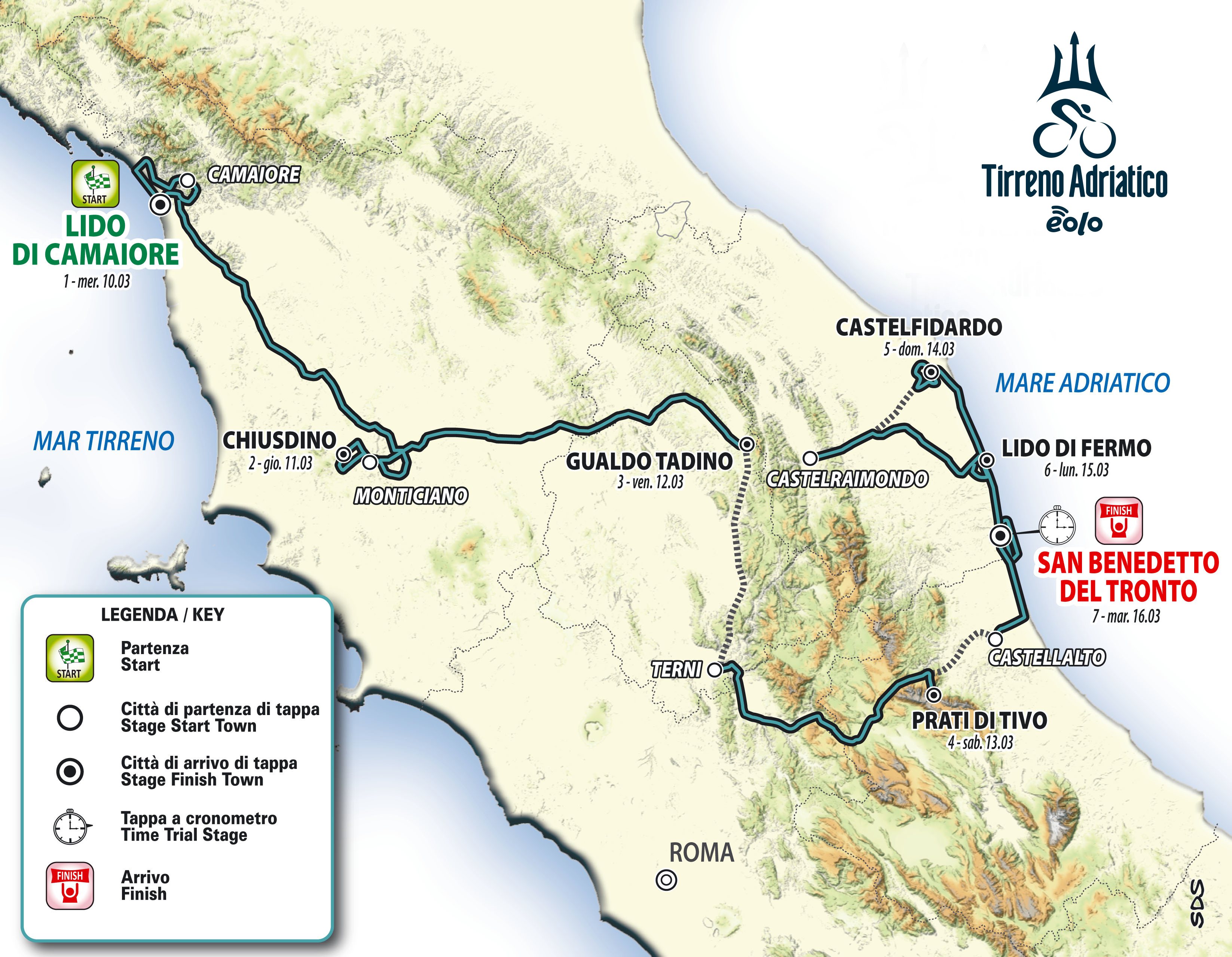 The race’s first stage, a 156km opener that starts and finishes at the beach resort of Lido di Camaiore, will be well suited to the fast wheels of the peloton. A bunch finish is by no means guaranteed however, as the sprinters will need to first negotiate the climb of Monte Pitoro three times in total early on in the stage. The next day will see the riders depart from Camaiore and finish in Chiusdino after 226km of riding. This long second stage takes place over undulating terrain, particularly after the halfway point, and will attract the race’s finisseurs. Stage 3 (189km), from Monticiano to Gualdo Tadino, begins with a series of ups and downs before a faster and flatter second half. Its finish is uphill however, although a bunch sprint shouldn’t be discounted as the gradient remains below 4% throughout.

A summit finish at Prati di Tivo awaits the riders on Saturday 13th, Stage 4. The stage will be brief at 148km in length, but intense. The first climb of the day will be the Forca di Arrone that leads onto the Rieti Valley. The peloton will then pass through the town of Rieti and begin the ascent up to Sella di Corno, followed by a long stretch of downhill that heads towards the outskirts of l’Aquila. From there, the penultimate climb of the day – the Passo Capannelle – will begin. The descent that follows, around 30km in length, is characterised by numerous bends and two long and well-lit tunnels. The final 14.5km climb to the finish at the Prati di Tivo ski station features 22 hairpin bends and an average gradient of 7%, with peaks at 12%.

Sunday 14th will play host to the ‘Tappa dei Muri’ (‘The Stage of the Walls’), from Castellalto to Castelfidardo (205km). The first 100km of the stage follows  wide and straight roads (mostly along the coast) to reach the town of Castelfidardo where, after first passing through the Selva della Battaglia, the riders will enter a 23km circuit that’s set to be repeated 4 times. The circuit is characterised by a series of short but steep climbs (the ‘muri’) and corresponding descents, with one brief flat section around the half way point. The first of the ‘muri’ (or walls) hits gradients of around 18% for long stretches and is classified as a GPM on each of the four laps of the circuit. The final kilometers feature several ups and downs of course, with double-figure gradients to climb after San Rocchetto. The last kilometer takes place in Castelfidardo, entirely uphill.

Stage 6 is from Castelraimondo to Lido di Fermo (169km). It will be the last chance for the race’s sprinters to take a stage win before the final time trial in San Benedetto del Tronto. The 11.1km time trial – Stage 7 – follows an altered route compared to recent editions of the race. The race against the clock begins from the Stadio delle Palme and passes beneath the nearby railway before continuing along the well-ridden roads of the traditional route, but in the opposite direction. The route then drops down towards the Porto d’Ascoli and visits the Piazza Salvo d’Acquisto. The riders will then reach a turning point and rise back up to the seafront, heading north. After the port, the route rises slightly again towards Grottammare then traces around the old stadium and faces south to reach the finish line. 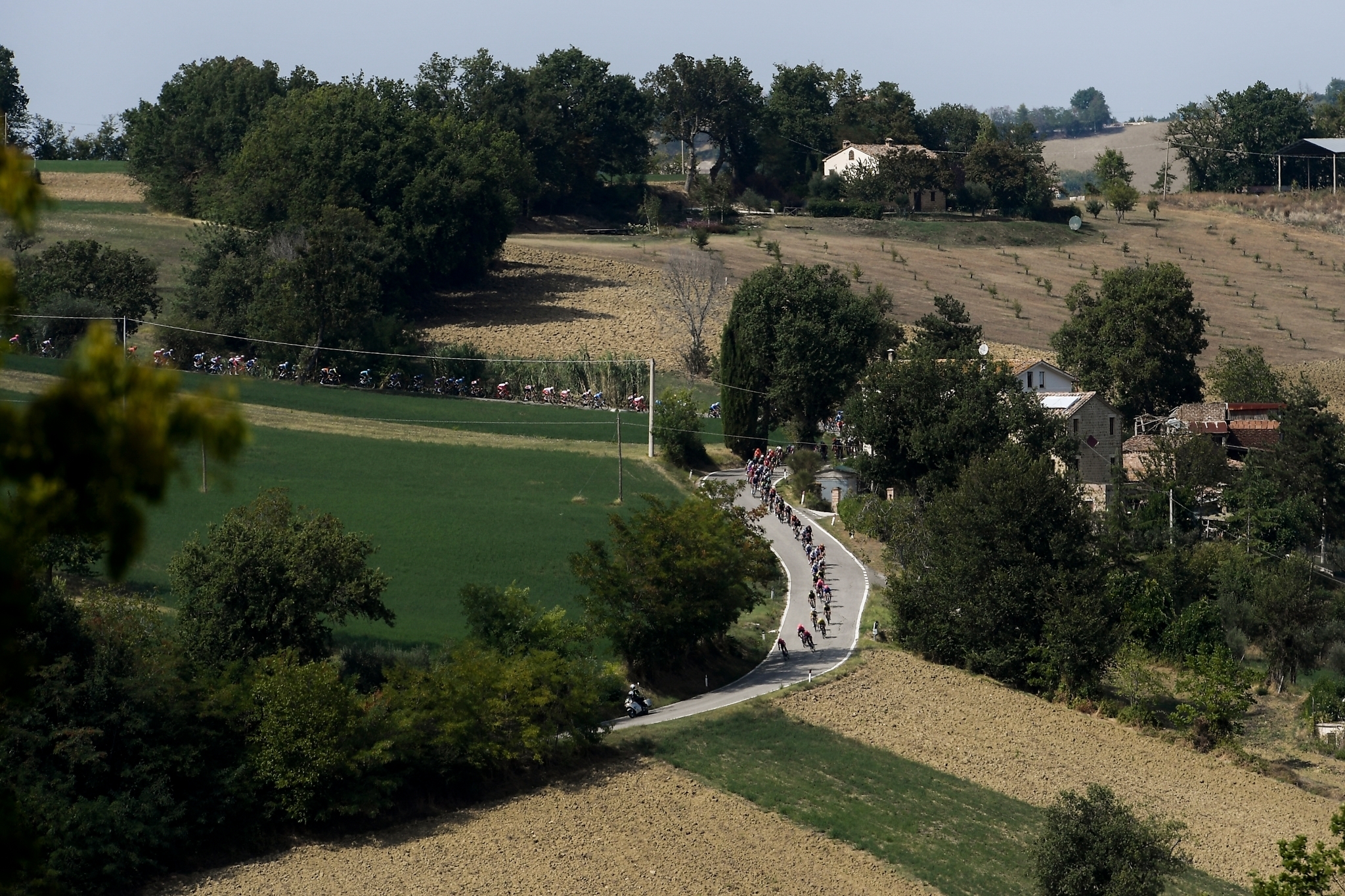 Stefano Allocchio, RCS Sport Race Director, said: “We have created a route that resembles that of last year’s edition, with stages adapted to fit the characteristics of each and every rider competing. We believe that this is a winning formula because it allows us to really showcase diverse and unique territories – from coastal locations to mountain passes and everything in between – to the world through a top-level sporting spectacle. My thanks go in particular to all of the organisations involved in the route’s planning that have worked hard to make sure that the Tirreno-Adriatico can go ahead in a safe and secure way during such a difficult period.”

Vincenzo Nibali said: “The Tirreno-Adriatico is an unmissable event in the early stages of my racing calendar, it’s an important test of form that I don’t think I could do without. It’s a race where I have had a lot of joy, especially in 2012 and 2013, but it also always gives me a real boost for the rest of the season. I also like the unique setting in central Italy, an area I know well. There’s Tuscany, where I found my form as a young rider, Le Marche, a spectacular region that I’ve grown to love in recent years, and let’s not forget the regions of Umbria, Abruzzo or Lazio. Even in a year like this, I am overjoyed to be riding the race.” 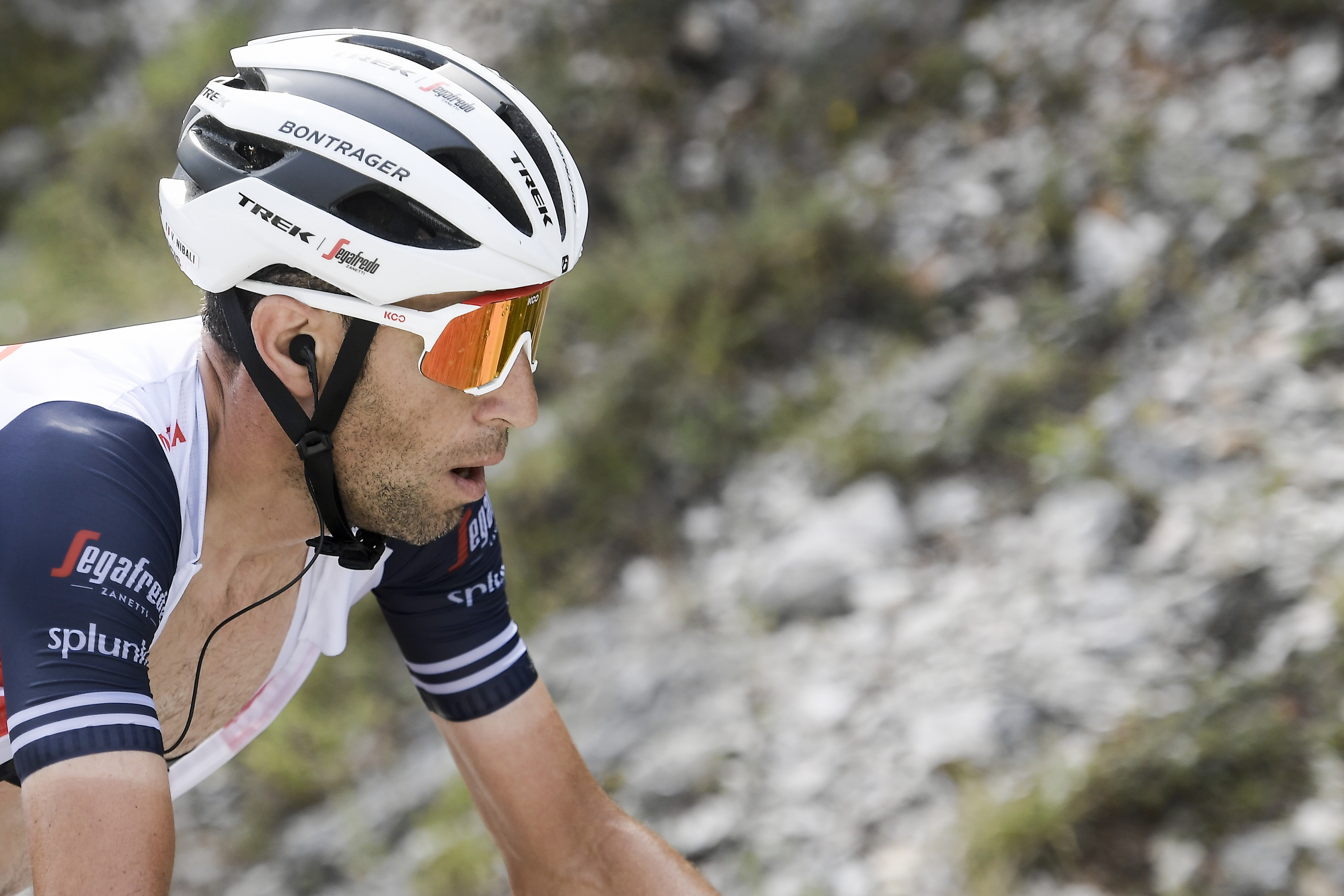