Spring is back and ‘La Classicissima’ returns with it. On Saturday 20 March, the 112th edition of the Milano-Sanremo will take place, following the classic route with one alteration. The riders will not tackle the Passo del Turchino as it is currently inaccessible due to a landslide. The route will instead pass over the Colle di Giovo climb, then descend onto the Via Aurelia to Albisola. They’ll then follow the traditional course for the remaining 112km, climbing the three Capi before reaching Cipressa and Poggio and arriving on Via Roma for the race’s iconic finish. The total race distance will be 299km.

Following the Cipressa climb (5.6km with an average gradient of 4.1%) the riders will be faced with a very fast and challenging descent that leads back to the SS 1 Via Aurelia. At 9km from the finish, the ascent of Poggio di Sanremo begins (3.7km long with an average gradient of less than 4% and a maximum of 8%, reached just before the crest of the climb). On the climb, the road is slightly narrower, with four hairpin turns in the first 2km. The asphalt-paved descent that follows is extremely technical, narrow at points and features a succession of hairpins, twists and turns all the way up to the junction with the SS 1 Via Aurelia. The final part of the descent enters the city of Sanremo. The last bend, leading onto the home straight, is 750m from the finish line. 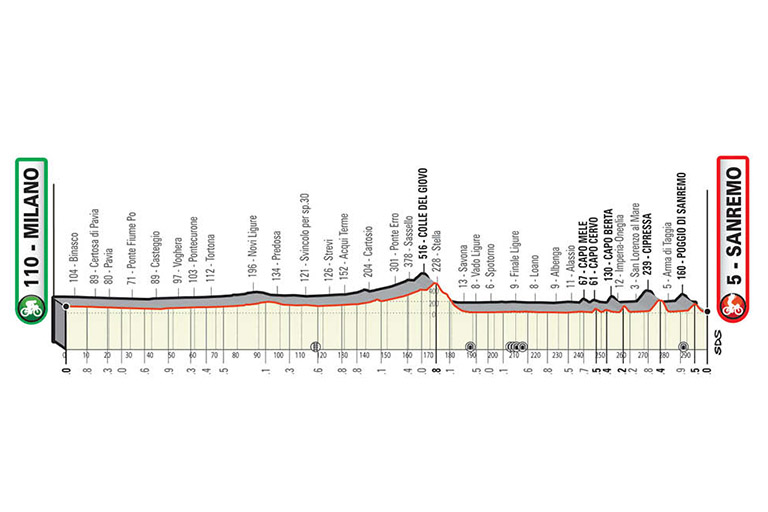 Paolo Bellino, CEO and General Manager of RCS Sport, said: “The previous edition of the Milano-Sanremo was held on an unusual date and took place over an unprecedented route. The results were very positive for the sport, for the media and from the audience’s point of view too. It highlighted the strong interest around La Classicissima and the level of excitement from fans all over the world that look forward to the event each year. This year, for the 112th edition of the race, we have decided to bring the Milano-Sanremo back onto its “classic” route in the Liguria region. So most of the route will remain as it has traditionally been; with the Aurelia, the Tre Capi, Cipressa and Poggio before the arrival on Via Roma, but we will not be able to visit the Turchino for technical reasons. What is certain is that this edition will witness the greatest riders in international cycling putting on a show on roads that have become legendary thanks to La Classicissima”.

The President of Regione Liguria Giovanni Toti said: “The Milano-Sanremo returns to truly open the cycling season, it returns in spring and, albeit with a route that is slightly different from the traditional one, returns for the most part to Liguria. The mimosas, the olive trees, the sea, it all comes together for the ideal setting for this true classic of cycling, with the riders’ ‘parade’ along the coast being one of the most important elements of the inimitable charm of this race. On top of it, the hope that this year the race will mark the beginning of a return to normality that we all await. We have had to suffer too many postponements, too many closures, too many setbacks to spring and summer events, which are the driving force behind the Ligurian hospitality and tourism sector. Let’s start again from Milano-Sanremo: that injection of energy, hope and the opportunity for a real restart for everyone “.

The Councilor for Tourism of the Regione Liguria Gianni Berrino said: “I am extremely pleased that the organizers have opted for the route that we at Regione Liguria had suggested. The choice, given the impossibility of crossing the Turchino, to pass the race on the Aurelia from Albisola throughout the province of Savona and finish in Sanremo is the most logical one. The Milano-Sanremo, one of the most important and popular races of the cycling season, is a very important event from a tourist point of view because, through live television, it is possible to admire for a few hours the panoramas of Liguria di Ponente, both those of the Riviera and those of the hinterland. I am thinking, for example, of the three historic Capi before Imperia (Capo Mele, Capo Cervo and Capo Berta) or, after last year’s passage on the Col di Nava, Giovo with Stella and Sassello”.

The Councilor for Sport of the Regione Liguria Simona Ferro added: “The Milano – Sanremo is the Classicissima, the most important and famous one-day race held in Italy and one of the five international cycling monuments. This is the race of Girardengo, of the eternal challenge between Coppi and Bartali and evokes great names in Italian cycling such as Saronni, Moser, Cipollini and Nibali. The Milano-Sanremo belongs to Liguria and is an event that shows the whole world our wonderful region. Even without the classic route, the Milano-Sanremo is still raced for a large part within our territory. As Regione Liguria, we have suggested a route through Sassello and Albissola, which guarantees a high competitive standard and which crosses most of our region”.