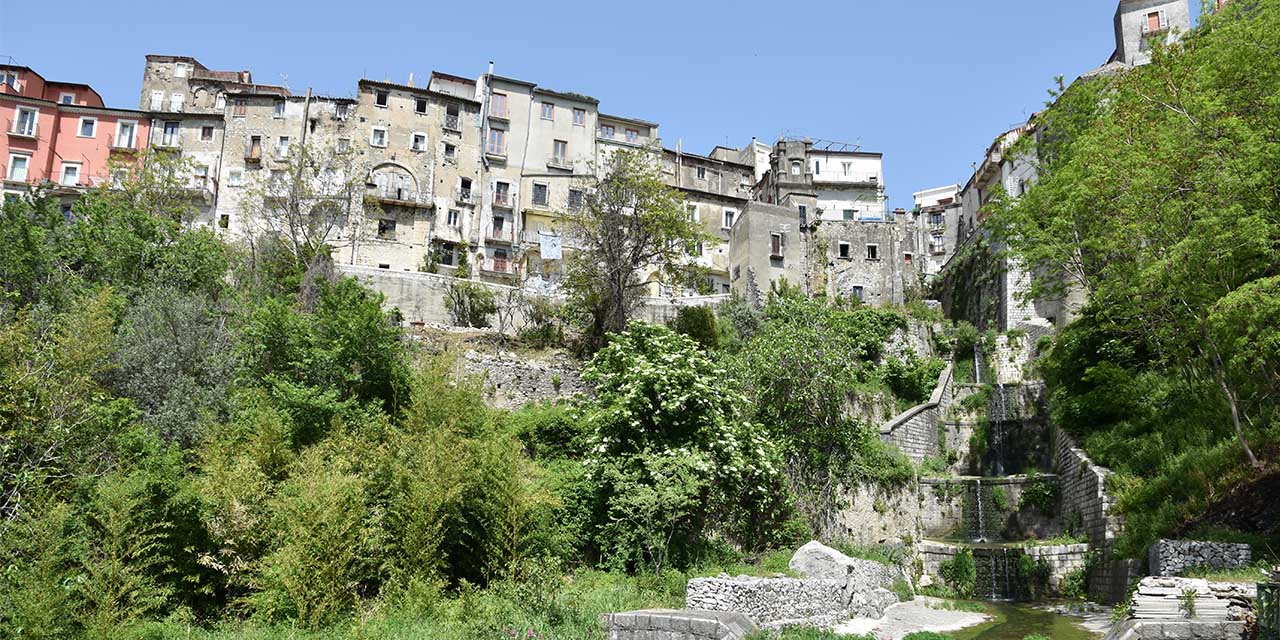 Campania is a region in southern Italy with more than 6 million inhabitants (more than half of whom are concentrated in the province of Naples). The region overlooks the Tyrrhenian Sea, and borders the regions of Lazio, Molise, Puglia and Basilicata. The territory of Campania has, by area, 50% hills, 35% mountains and 15% plains, divided into four clear sub-regions. On the plains, the fertile Terra di Lavoro. The Sannio, made up of mountains and hills along the Apennines, with the Matese mountains. Then, there is Irpinia, in the central and eastern part of the region, landlocked and mostly mountainous. Finally, Cilento, a large, mountainous headland, marking Campania’s southern border, separating the Bays of Salerno and Policastro. Campania’s main river is the Volturno, the longest in southern Italy. Its second river is the Sele. The Campania coast faces the Tyrrhenian Sea. The best-known stretches of coast are those of the Sorrento peninsula, with the Lattari Mountains running along the entire headland, which belongs partly to the province of Naples, with the Sorrento Coast, and partly to Salerno, with the Amalfi Coast. The Cilento coast lies entirely within the province of Salerno. Major natural landmarks include Mount Vesuvius and the volcanic area of the Phlegraean Fields, also known as Campi Flegrei. Outstanding sights also include the Solfatara, a shallow volcanic crater at Pozzuoli, which emits sulphurous fumes; Lake Avernus, a volcanic crater lake thought of in ancient times as one of the entrances to the underworld; and the wide variety of thermal springs, which include the springs at Ischia, Agnano, Pozzuoli and Castellamare di Stabia. For their natural beauty, the islands of Ischia, Capri and Procida are world famous. Two more, smaller, but equally beautiful islands are Vivara and Nisida.

The region boasts a long and complex history that has left a rich cultural legacy, illustrated, for example by the ancient architecture still visible at Cuma, Naples (first known as Parthenope, then as Neapolis) and Paestum, where Cilento begins, an ancient city of Magna Graecia, with its impressive Temple of Athena, a site of great value, as are those in the valley of temples at Agrigento in Sicily. Major migrations from Greece – whence the name Magna Graecia – shaped the history of Campania, as archaeological and architectural traces show. The Roman amphitheatre at Capua, second only to the Coliseum in size, in unmissable. So too is the early Christian art of the Catacombs and Basilicas in Naples. Other highlights include the Flavian Amphitheatre in Pozzuoli, the archaeological site at Cuma and the Piscina Mirabilis, a freshwater cistern dug out of the cliff face at Bacoli, to provide the fleet at the harbour in Misenum with drinking water. Near Vesuvius lie Pompeii and Herculaneum, destroyed by the eruption in 79 AD. Also outstanding are the excavations at Oplonti. From the Roman period, the Arch of Trajan at Benevento, built to honour the Emperor Trajan, is virtually intact even today.

The culture reflects the influence of the Lombards, the Angevins, and the House of Aragon, in the Bourbon period, when Naples and its Kingdom were one of the cultural, artistic and economic centres of Europe, leading the continent in many sectors. On 3 October 1839 the Napoli-Portici railway, the first one in Italy, but already equipped with a double track line, was inaugurated. In 1861, Campania joined the Kingdom of Italy. The industrial revolution that followed was at the expense of Naples, Campania and the entire south of Italy, which suffered problems that prevented their full development.

As regards the architectural heritage, the cathedrals of Casartavecchia, Amalfi, Benevento and Salerno are all outstanding, as are the Rocca dei Rettori and the church and monastery complex of Santa Sofia, both at Benevento. The Certosa di Padula (Padula Charterhouse), a UNESCO World Heritage Site, has the world’s largest cloister, surrounded by 84 columns. The Reggia di Caserta (Royal Palace of Caserta), built for Charles III of Spain by the architect Luigi Vanvitelli, is also a UNESCO World Heritage Site. It is, by definition, the last great work of Italian Baroque and, with 1,790 windows, and 1,200 rooms covering more than 2 million square metres, the largest royal residence in the world. The Bourbons wanted to emulate the Palace of Versailles in Campania. It is surrounded by an immense park divided into two sectors characterised by an Italian garden with many fountains, waterfalls and water features, and an English garden with dense woodland. Close to Caserta, in the village of San Leucio, Ferdinand I of the Two Sicilies opened his silk factory, the “Regia Manifattura delle Sete”, included in the UNESCO World Heritage sites list.

The Miglio d’Oro (named after an ancient unit of measurement used in Naples) is a short stretch of road running along the coast of the southern neighbourhood of Naples. Its remarkable historical and artistic legacy includes wonderful rococo and neoclassic villas with large, verdant gardens. The view over the Gulf of Naples and the islands of Capri, Ischia and Procida is breath-taking.

Giuseppe “Joe” Petrosino was born in Padula in 1860. He immigrated to New York at a very young age, and became a legendary detective fighting against organized crime. He was shot to death in Palermo in 1909, where he was investigating international criminal connections. His life inspired a number of films and novels.