Andrea Vendrame is one of those hard to place riders who is sometimes called a sprinter but is really one of those Sonny Colbrelli types, strong as a team of oxen, but with a fast finish after a hard stage. In the spring of 2019, he seemed ready for a breakthrough of sorts when, during a ten day period in April, he won a stage of the Circuit de la Sarthe, finished second in the Tour du Finistère, then first in the Tro-Bro Léon, the Strade Bianche of the French northwest. In the final week of the Giro, he was the fastest finisher, on paper, in a three-man breakaway with Estaben Chaves and Amaro Antunes, but shipped his chain at the strategic moment, and came away second. The stage win would have changed his career, as would first instead of seventh at the Giro della Toscana, ninth at the Coppa Sabatini, and fourth in the Tre Valli Varesine. 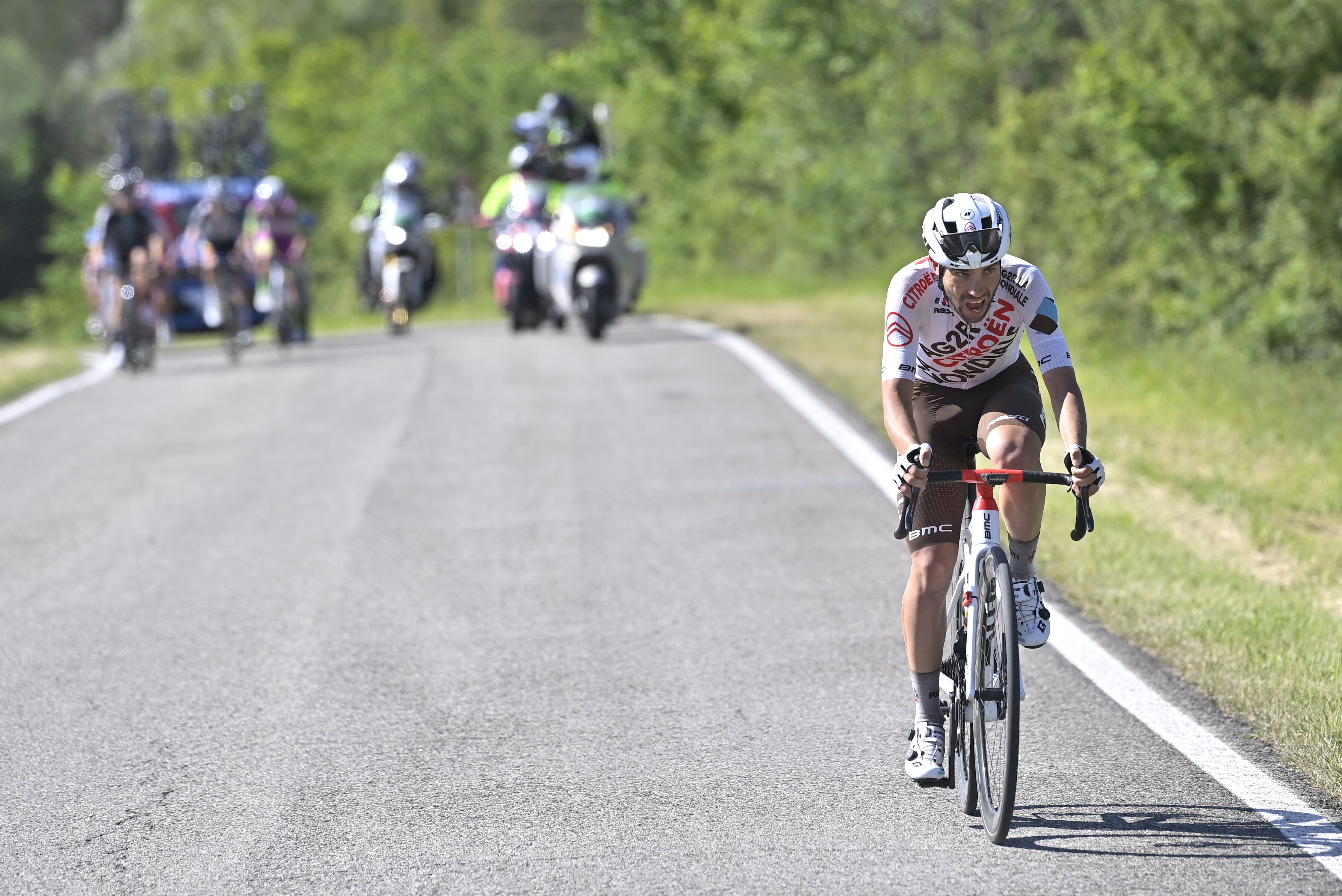 Then came Covid-19 and a shortened season with no wins. At the 2021, he started the Giro wearing number 17, a number some Italians think of as unlucky. In 9 AD, the German tribes ambushed Legion XVII of the Roman army and completely annihilated it. The Roman army did not use the number again. Two thousand years later, number 17 had not won a Giro stage since 1987, when Marco Vitali outfoxed two breakaway companions at Riva del Garda. Until today. 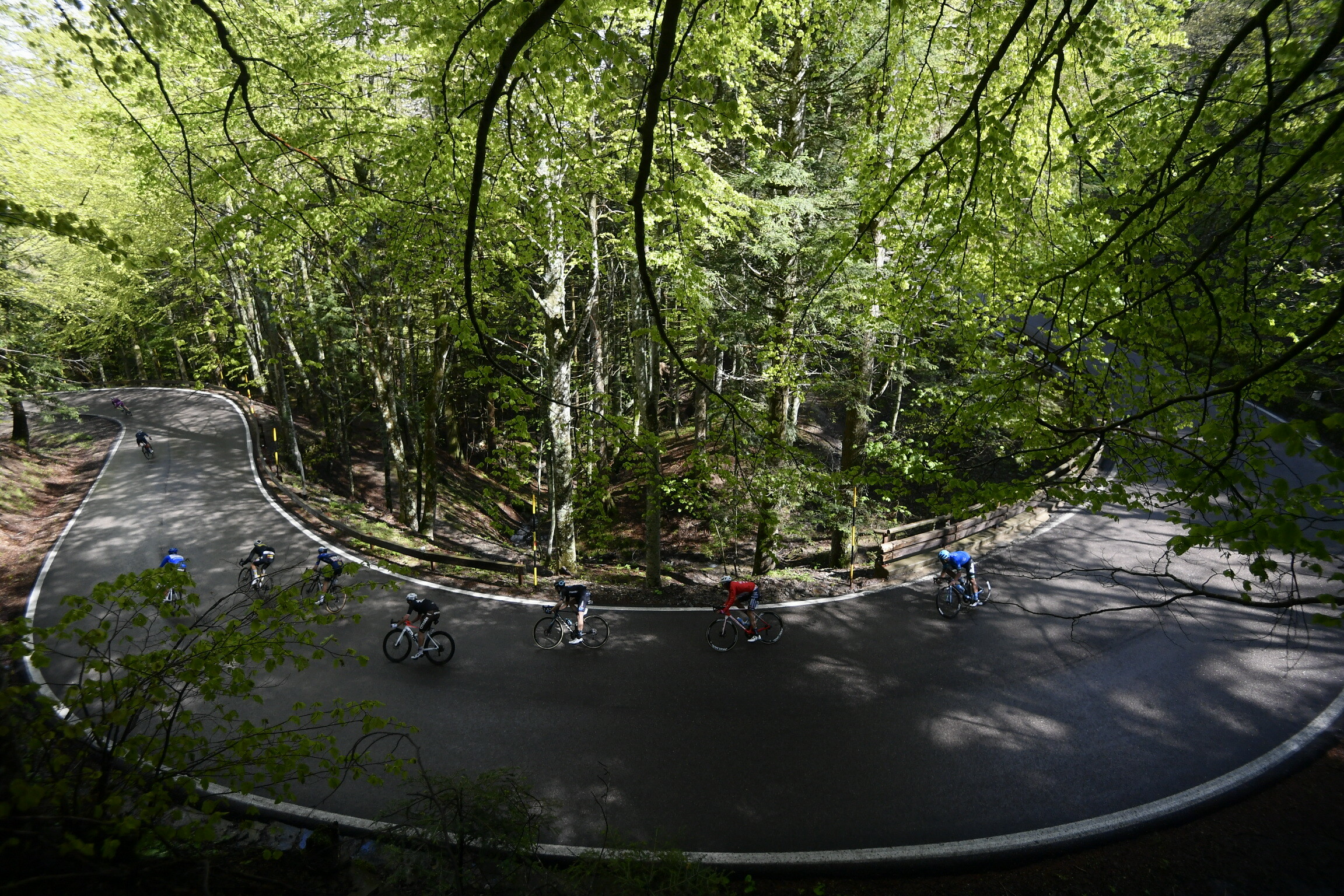 With no mountain passes over 1295m, the profile suggested something hilly but no more. Yet, as Nico Roche said before the start, “With 4,000 plus metres of climbing, if you don’t call it a mountain stage, then we don’t have a mountain stage.”

The breakaway did not form for 60 km. When it did,AG2R Citroen Team had two riders in it, the roommates Vendrame and the Maglia Azzurra Geoffrey Bouchard. Before each of the first three categorised mountains, Vendrame led out Bouchard for the mountains points. It helped the Maglia Rosa to a lead of over 40 points in that competition (although the mountains are heavily weighted towards the last week, and the Maglia Azzurra is likely to go to a GC contender). Bouchard made a small bit of history by moving equal to Raphael Geminiani, twice the king of the mountains at the Giro d’Italia in the 1950s, with seven GPM wins.

Then it was down to Vendrame. On the final climb, he attacked. Over the top, a four-man group of Vendrame, Hamilton, Brambilla and Bennett formed. On the run in to the finish, as Brambilla and Bennett bickered, Vendrame and Hamilton stole away. Even doing most of the work at the front himself, Vendrame had enough left to win the sprint.

The GC contenders declared a truce today until the final climb, where Nibali and Ciccone attacked in tandem. Team Ineos closed them down, before Nibali went again on the descent. The effort won him back 7 seconds of his 4’11” deficit. It was, if nothing else, a show of defiance – of Bernal, of his rivals, of his injury, and of the years.

Meanwhile, Vendrame will go through his birthplace of Conegliano on stage 14. He can certainly return home with some satisfaction. In Roman times, to ward off bad luck, stonemasons often changed the number XVII to ‘VIXI’, meaning ‘I have lived’). Andrea Vendrame today earned the right to say as much.