Toyota returns to the Giro d'Italia and Giro-E with its fleet of cars.

The Giro d’Italia (May 6-29) will once again get on board with Toyota, which will be the official partner car of the Corsa Rosa, the Giro-E and all cycling races organized by RCS Sport.

Today, at the RCS MediaGroup headquarters, in Milan, the President of the RCS Group, Urbano Cairo and the CEO of Toyota Motor Italia, Luigi Ksawery Lucà, met.

President of RCS MediaGroup Urbano Cairo said: “There is just over a month before the start of the 105th Giro d’Italia and this year too we are confident that we can offer a world-class event. The Grande Partenza from Hungary and the distribution of television images in 200 countries on five continents make the next Giro d’Italia an important event. Toyota, an international brand, will be part of the ‘Carovana Rosa’ for the fourth consecutive year; their hybrid and innovative cars will help us to build an even more responsible and sustainable show and to showcase the territories crossed with all their numerous excellences.”

“We are very proud of being alongside RCS MediaGroup for the fourth consecutive year – said Luigi Ksawery Luca’, CEO of Toyota Motor Italia. It is a partnership that is in line with our Beyond Zero vision, which aims for the creation of a sustainable, safe and inclusive society. It is a great honor for us to be able to offer our electrified fleet, helping to make the Giro even more sustainable and respectful of the environment. ”

Toyota will be present at the 105th edition of the Giro d’Italia with its entire electrified range, with a fleet of over 50 vehicles.

The new Toyota bZ4X, the first model of the new Toyota bZ – beyond Zero – family of zero-emission battery electric vehicles (BEVs), will make its Italian debut at this year’s Giro, and will accompany the riders through the 21 stages.

The second-generation Toyota Mirai will also be part of the fleet, a car that embodies the Beyond Zero vision of the Toyota Group: an electric car, powered by hydrogen fuel cell, whose only emission is water vapor and, thanks to a filter, it is able to even clean the air.

The fleet is completed by the RAV4, with its Full Hybrid and Plug-in Hybrid versions, and the Corolla Hybrid Touring Sports, cars capable of combining performance with high energy efficiency and extremely low climate-altering and polluting emissions.

In fact, in last year’s edition, the RAV4 Hybrid and the Corolla Hybrid Touring Sports that accompanied the riders in the race recorded performances at the highest level, traveling along the stages of the event in zero emissions mode for more than 50% of the time, testifying the great contribution that Toyota electrified technologies can make to environmental protection and sustainable mobility.

Waiting for the riders at the finish line will also be the new Toyota Aygo X, the innovative urban crossover, a unique proposal among city cars and rich in technology. 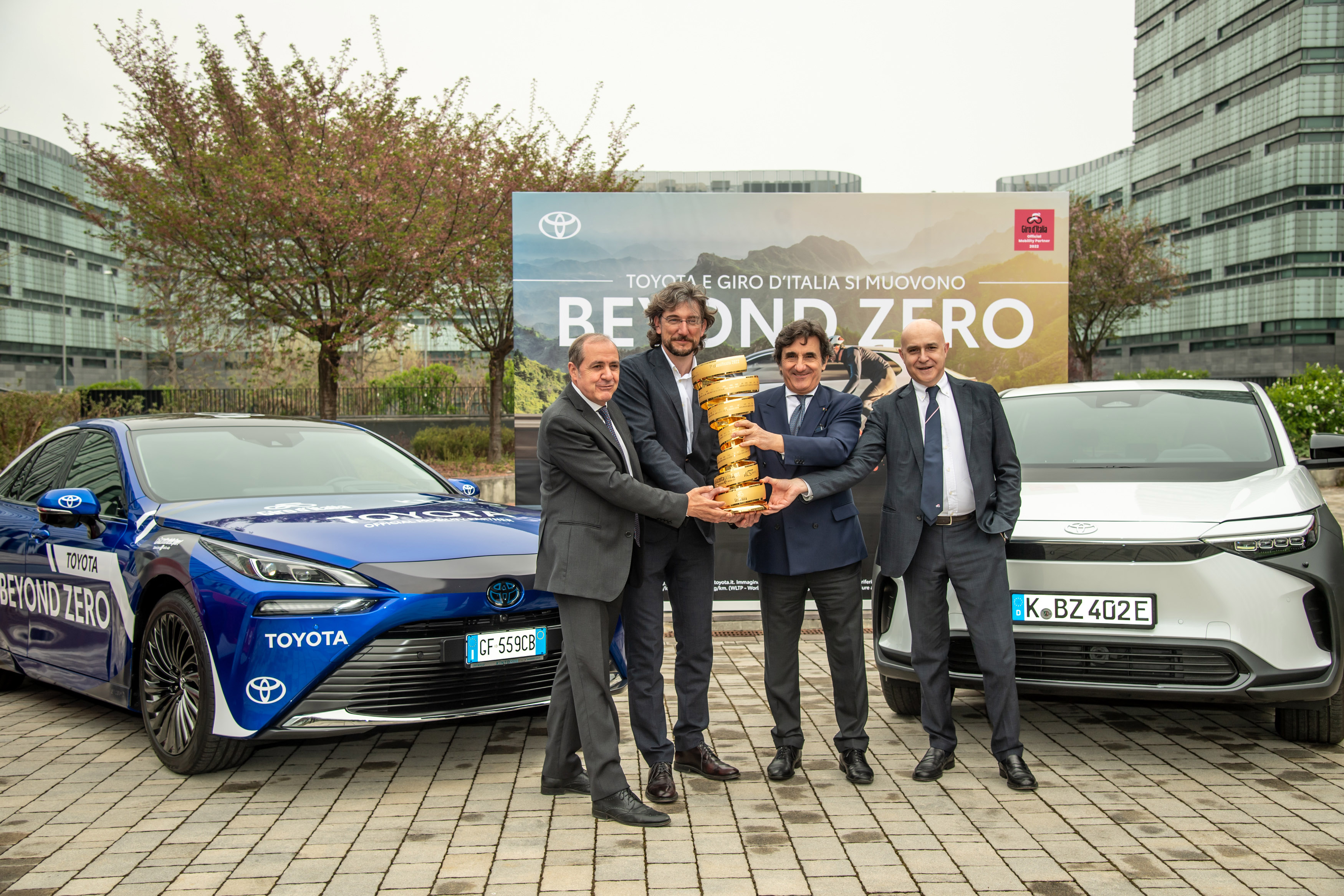 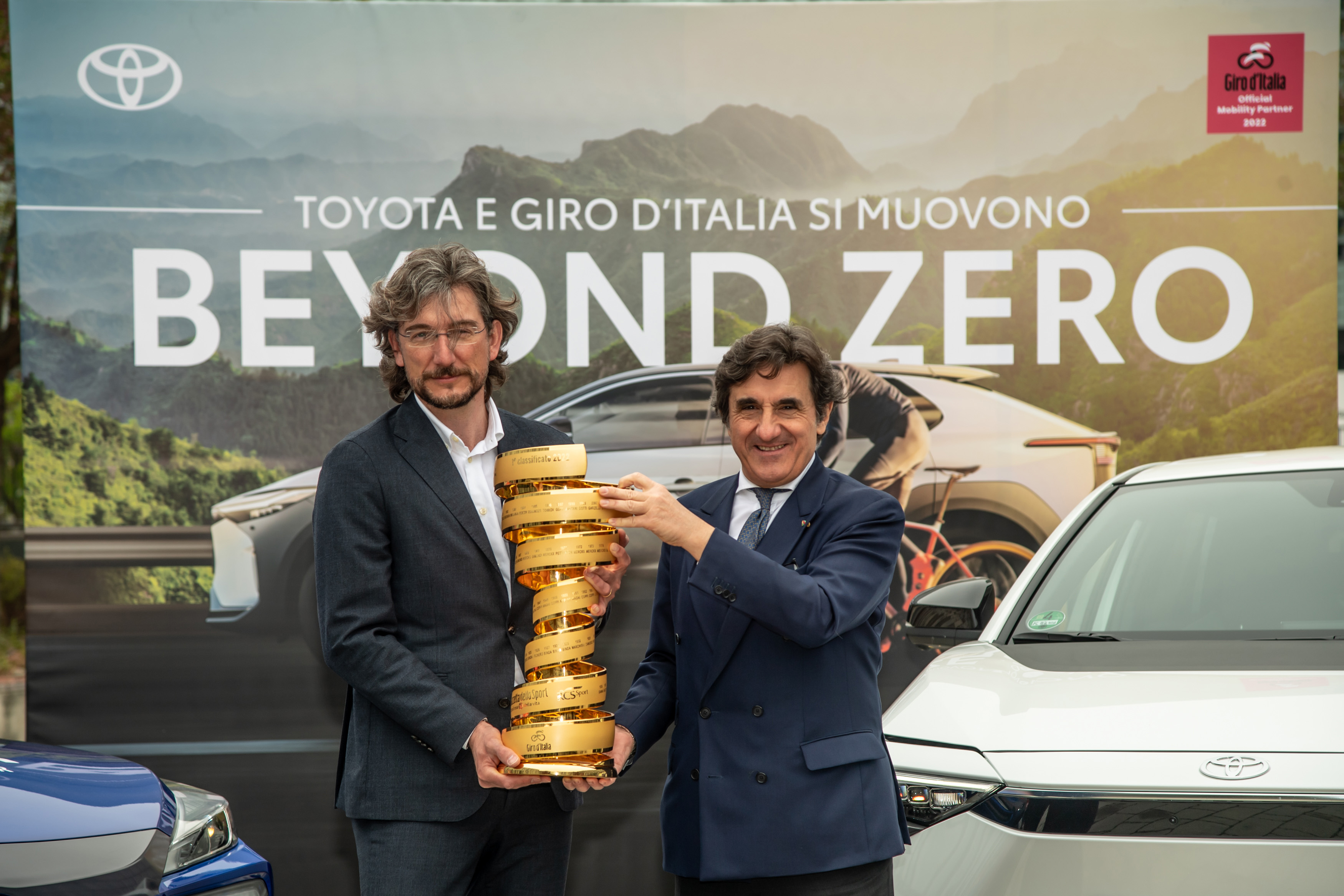