The unification of Italy, Dante Alighieri, the 90th birthday of the Maglia Rosa (first worn by Learco Guerra after Stage 1 of the 1931 Giro, won by Francesco Camusso), the great mountains, the Italian landscapes, villages and cities, the Winter Olympics and the great personalities and champions that made cycling and the Giro d’Italia prestigious. These are just some of the highlights of the official race route for the 104th edition of the Corsa Rosa, which is set to take place from 8-30 May.

The Corsa Rosa will start in Turin, on the 160th anniversary of Italy’s unification, with its first three stages in the Piemonte Region. On the occasion of the 700th anniversary of Dante Alighieri’s death, the cities of Ravenna (where the Sommo Poeta was buried) and Verona will host, respectively, the start and finish of Stage 13. The Giro will also pass through Foligno, where Dante’s Divina Commedia was first printed in 1472. Perugia-Montalcino (Brunello) will be this year’s Wine Stage and will include several segments of the Strade Bianche course towards its finish. The Siena-Bagno di Romagna stage, which will start in Piazza del Campo, is set to celebrate 100 years since the birth of Italian cycling legend Alfredo Martini. This will also be the Giro’s Bartali Stage, taking the race through both Sesto Fiorentino and Ponte a Ema, where Gino Bartali was born.

This year’s Corsa Rosa will also see the return of a stage finish on Monte Zoncolan, climbed from the Sutrio side. Pordoi Pass (2,239m) will be the 2021 Cima Coppi, and will form part of an unprecedented Dolomites stage that includes Passo Fedaia (Montagna Pantani), Passo Giau and a finish in Cortina D’Ampezzo – host city of the 2026 Winter Olympics. Milan will host the grand finale with a 29.4km individual time trial, starting in Senago. The Giro will cross national borders on two occasions: the Grado-Gorizia stage, which will touch Slovenia, as well as Stage 20 from Verbania to Valle Spluga/Alpe Motta, when it will pass through Switzerland. 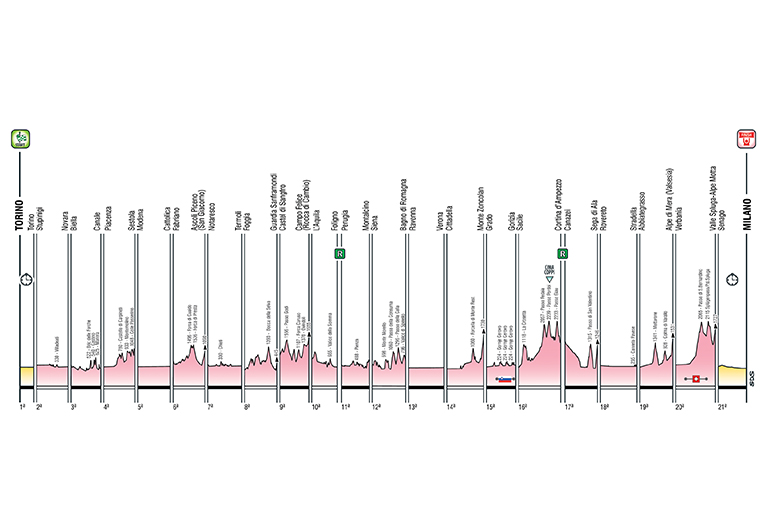 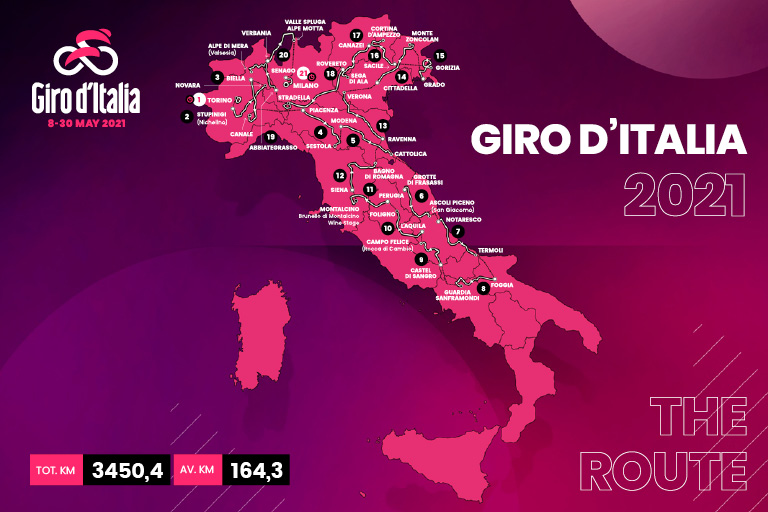 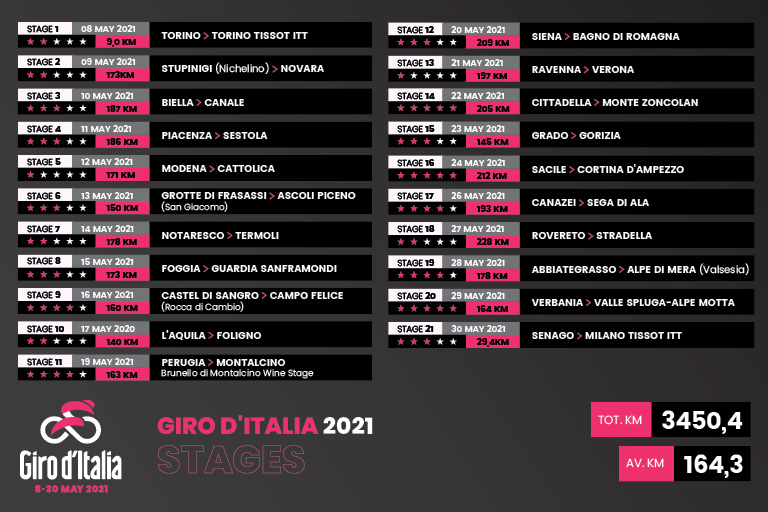 The Grande Partenza and week one

As previously announced, Turin and the Piemonte Region will host the Grande Partenza of the Giro d’Italia for the first time in 10 years, on the occasion of the 160th anniversary of the unification of Italy. The first stage will be a 9km-long individual time trial through the streets of Turin; next is a sprinters’ stage from Stupinigi (Nichelino) to Novara (173km), while the third stage will start in Biella and finish in Canale, after a 187km-long course (a stage suitable for finisseurs). The first uphill finish will be at Sestola, on Stage 4, which starts in Piacenza. Next, the sprinters will battle it out over Stage 5 (Modena-Cattolica), on Wednesday, 12 May. A tricky Stage 6 with 3,400 meters of elevation gain will take the peloton from the Frasassi Caves to Ascoli Piceno (San Giacomo), through two GPMs – one at the halfway point and one at the end, at 1090m up. Notaresco-Termoli (Stage 7, 178 km) is another day that’s suitable for the race’s fastest wheels. While, on Saturday, 15 May, Foggia – Guardia Sanframondi (Stage 8, 173 kilometers, with 3,400m of climbing) will feature the Bocca della Selva GPM, at 53 km from the finish line. On Sunday, 16 May, the Giro will see an unprecedented uphill finish in Abruzzo for Stage 9, at Campo Felice. This stage, which starts in Castel di Sangro, features 3,400m of elevation gain and includes three GPMs before the final climb. The race’s 10th stage, which takes place on Monday, 17 May, from L’Aquila to Foligno, will most likely be best suited for either breakaways or sprints. The first rest-day of the Giro is scheduled for Tuesday, 18 May.

The race will resume on Wednesday, 19 May, with a spectacular Stage 11 from Perugia to Montalcino (Brunello di Montalcino Wine Stage), starring an undulating first half, followed by a 70-km-long second part, of which 35 kilometers are taken from the Strade Bianche course. The last Giro stage that finished in Montalcino (2010) saw Cadel Evans take the win in the Rainbow Jersey on a muddy and rainy day. Stage 12, Siena – Bagno di Romagna (The Bartali stage), will pay tribute to two special men who made cycling great: Gino Bartali and Alfredo Martini. The race will pass through both Ponte a Ema and Sesto Fiorentino on the day, ending in Bagno di Romagna after three GPMs and 3,700m of climbing. Stage 13 will be dedicated to the memory of Dante Alighieri, on the 700th anniversary of his death, taking the group from Ravenna (where the Sommo Poeta was buried) to Verona, where a bunch sprint is expected. On Saturday, 22 May, the riders will leave from Cittadella, heading to the mighty Zoncolan from the Sutrio side for Stage 14. The Giro last climbed it from that side back in 2003, with Gilberto Simoni taking the win. Stage 15 from Grado to Gorizia, a perfect day out for the finisseurs, features a three-lap course, which will cross over into neighboring Slovenia. Finally, Stage 16 from Sacile to Cortina d’Ampezzo, on Monday, 24 May, will close out the second week of racing. This will be this year’s Dolomites’ stage and includes the Fedaia Pass (Montagna Pantani), the Pordoi Pass (Cima Coppi) and the Giau Pass on its course, before heading into Cortina for the finish line (the city that will host the 2026 Winter Olympics).

After a second rest-day, the Giro will start again on Stage 17 with another day in the mountains, from Canazei to Sega di Ala (an unprecedented uphill finish for the race). The riders are set to climb the San Valentino Pass before the final ascent. Then, Stage 18 will take place on Thursday, 27 May, from Rovereto to Stradella. This is expected to be a critical moment in the race, with attacks expected in the final kilometres of the stage on the Oltrepò Pavese hills. Stage 19 will start from Abbiategrasso and will end on Alpe di Mera in Valsesia (a new finish stage for the Giro). The stage, with its 3,700m of elevation gain, also includes the Mottarone and Colma di Varallo climbs. Stage 20 is a punishing one, with 4,800m of elevation gain, and will start from Verbania before ending on Alpe di Motta, in Valtellina’s Valle Spulga. The riders will also tackle the San Bernardino Pass and the Spluga Pass, two climbs that will take the peloton more than 2,000m up. The grand finale will be on Sunday, 30 May, featuring an individual 29.4km time trial that will start from Senago and finish at Milan’s Duomo.