It was the fastest stage of the Giro, and the riders sped into Medole, at kilometre 83, like a fifteenth-century influx of immigrants from the Brescian famine.

A legal judgment in 1481 ruled that immigrants to Medole were to be treated as foreigners, with limited rights, until 150 years had passed from the arrival of their first family member. Ninety years later, 110 immigrant families petitioned the Duke of Mantua for relief. He confirmed the privileges of the natives, and the peloton sped out of town as quickly as it had arrived, without taking a second to glance at Titian’s The Risen One Appears to the Mother by Titian or Mantegna’s Lamentation over the Dead Christ, two major artistic treasures kept in a provincial parish church. How thoroughly Italian.

It was the longest stage too, and a stage of wine, and poetry, and music, and, like a fairy-tale millipede a quarter of a mile long with the smiling face of Filippo Ganna, the peloton strode single file through Ala, where Mozart stayed, Castel Goffredo, Virgil’s birthplace (and Italy’s lingerie capital), and Cremona, the town of Stradivarius and Guarneri. 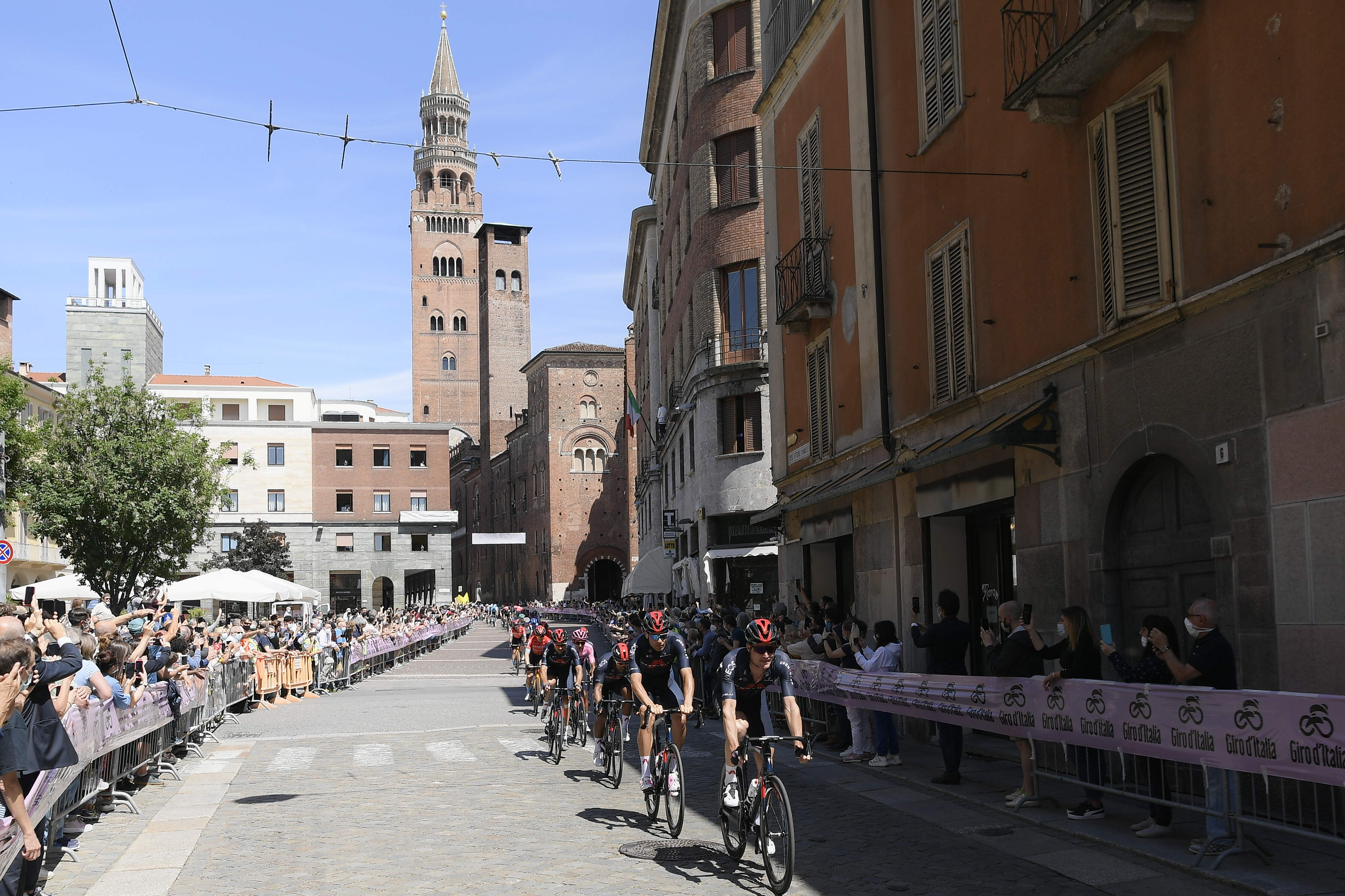 It took 29 kilometres for 23 riders to win the lottery prize of a place in the breakaway. Peter Sagan was not one of them. “It’s no sense for me,” he said, in immigrant’s English, “because if I go to breakaway, also Gaviria and Cimolai go with me, you know? It’s better to.. well, it always depends on the goal what you have, and now I have this Ciclamino jersey as a goal, and it was like is was.” 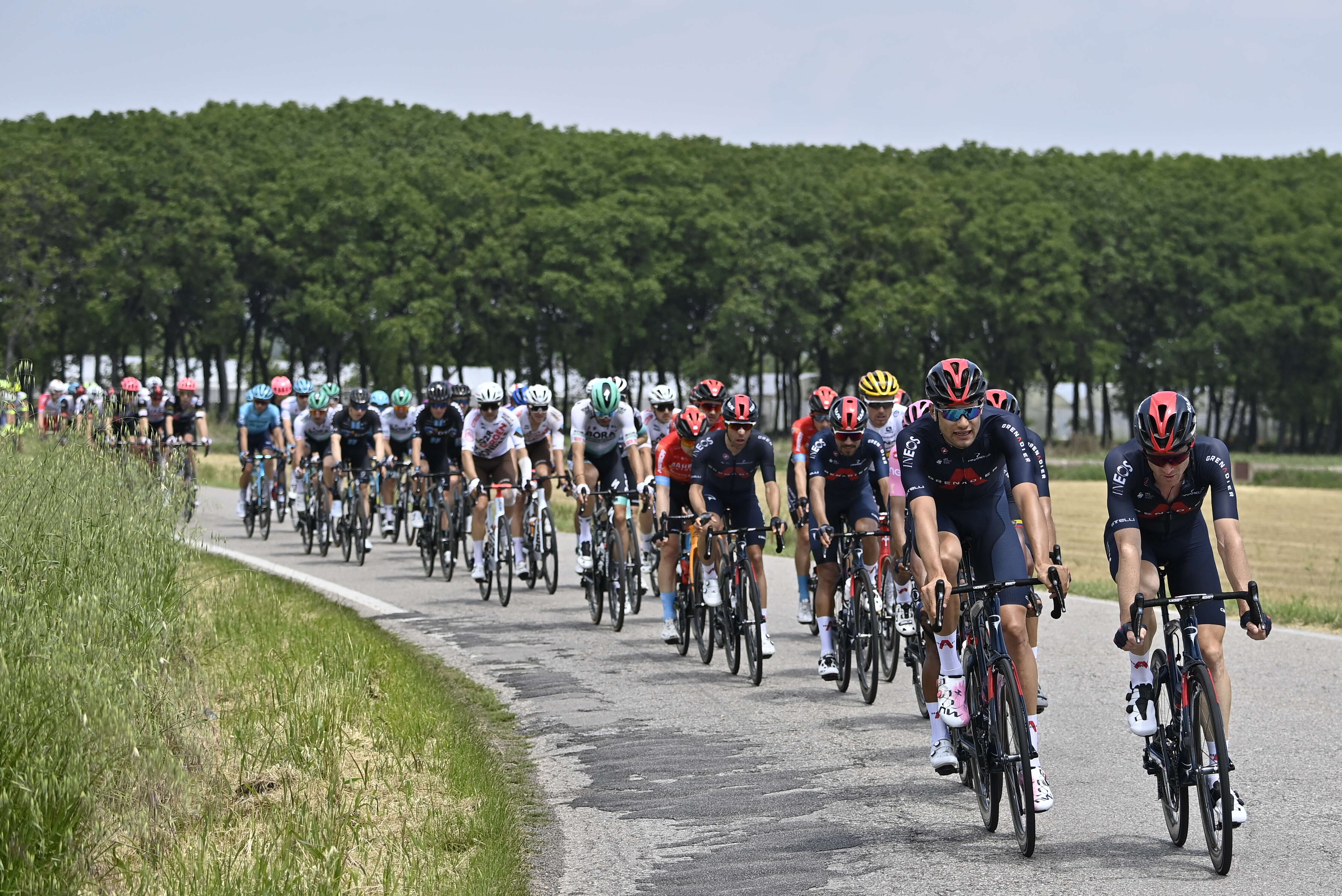 Racing resumed some hourss later on the climb to Cantú Beccaria with 33.5 km to go, when Samuele Battistella and Filippo Zana broke the peace pact among the escapees. With 26 km to go, the various groups came together, and Cavagna darted away, opening a lead of about half a minute. With 14 km to go, Alberto Bettiol, the Ronde winner, who has been one of Huge Hugh Carthy’s best mountain helpers this Giro, set off after him. 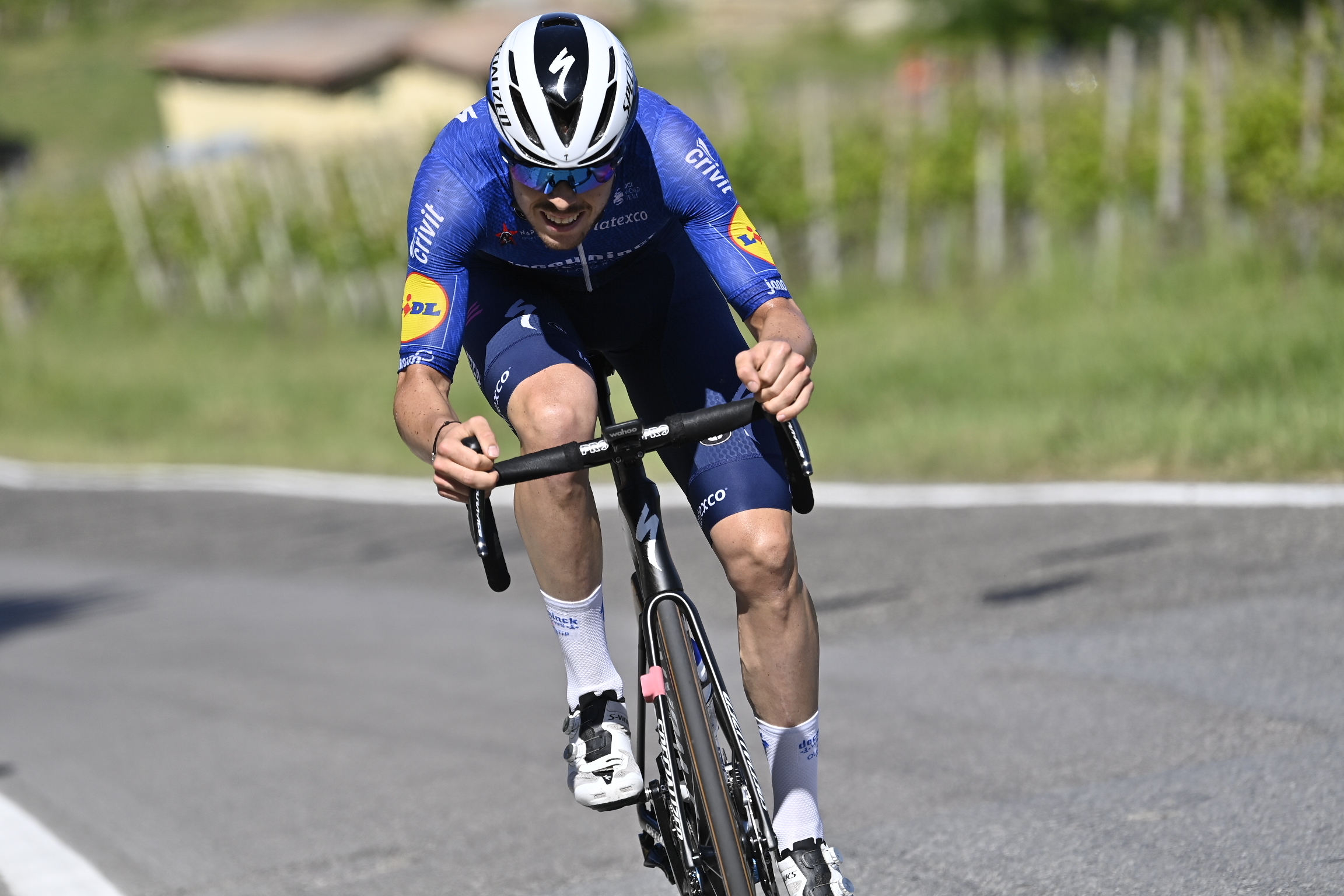 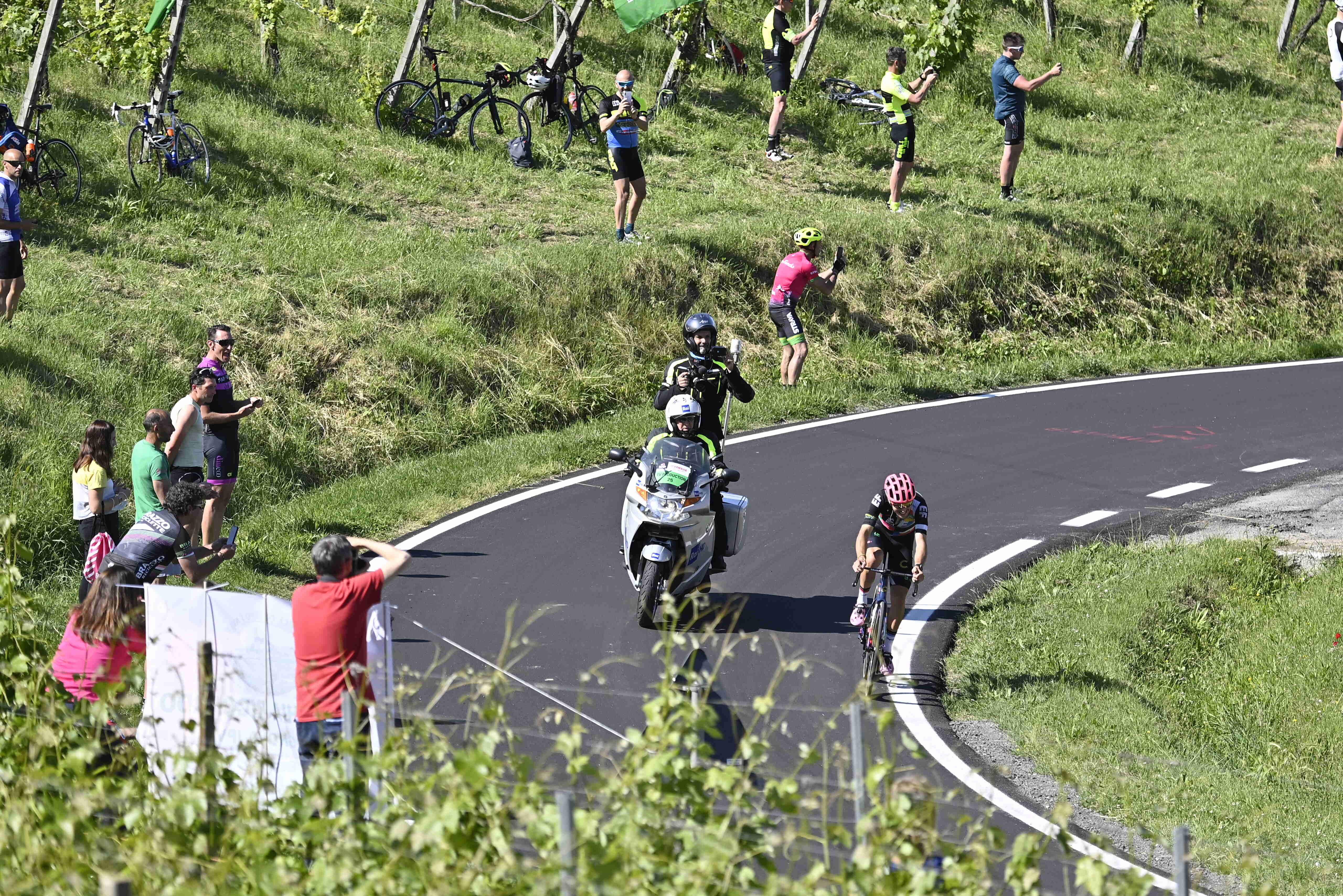 With 6.9 km to go, Bettiol catches him. With 6.6 to go, Cavagna blows. Bettiol darts past, followed by Nico Roche, who never quite catches the Tuscan, and concedes second place in the final 100m to Simone Consonni. 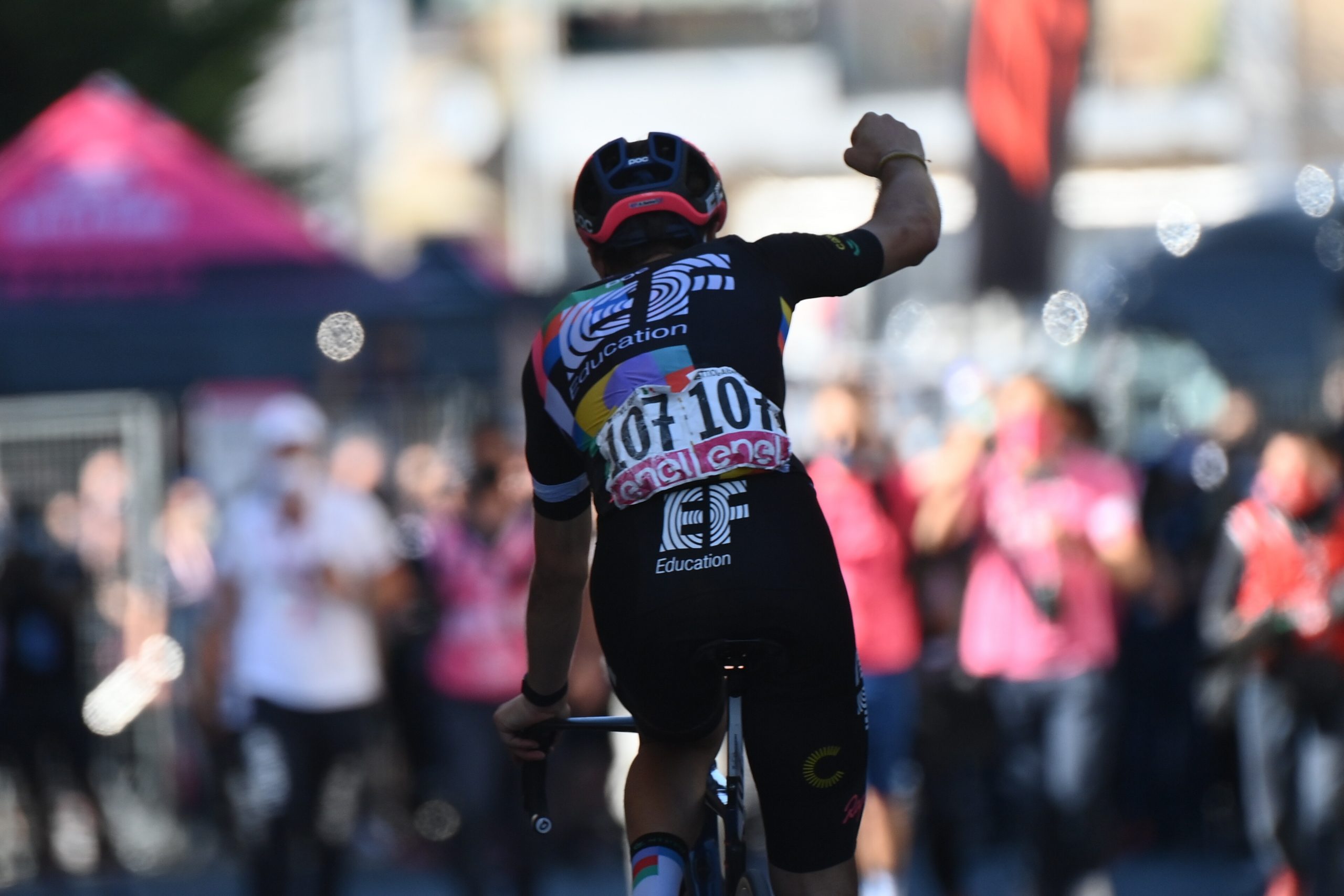 Ganna, the gentle giant, led the Maglia Rosa group home 23’30” after quite possibly the most popular win of the race, by the boyish, charming Tuscan, Alberto Bettiol, dressed in a jersey that is a thrown-together patchwork of flags, like the peloton itself. After the stage, as Bettiol embraced third-placed Nico Roche, who he described in his macaronic English as “a friend of mine, but in the final didn’t really help me, it’s OK, like, but I dropped him on the last climb,” Colombian fans on the social media joked that the armpit of Bettiol’s victory belonged to them. The two mountain stages to come will decide whether there is more than an armpit in this Giro for Colombia. 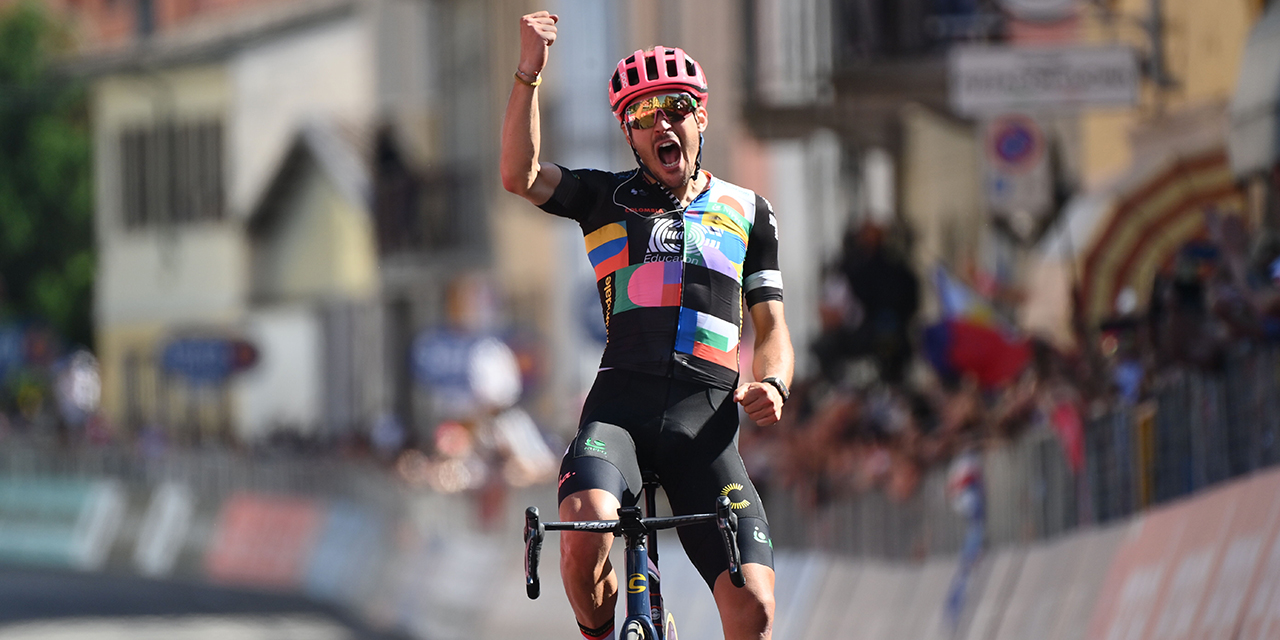