Yesterday evening an event was held with many friends of the Giro d’Italia at the Enoteca Signorvino in Valpolicella, Verona. The evening consisted of tasting dishes and wines, Italian excellences that the Corsa Rosa promotes every year. Giancarlo Perbellini, the 2 Michelin star chef, who also dedicated a dish to the arrival of the Giro (ravioli stuffed with pasta and beans) was there to introduce the dishes to guests of the event hosted by the Veronesi family, owners of Signorvino and of the Gruppo Calzedonia (that, along with the Intimissimi Uomo brand, sponsored the Maglia Bianca 2021). 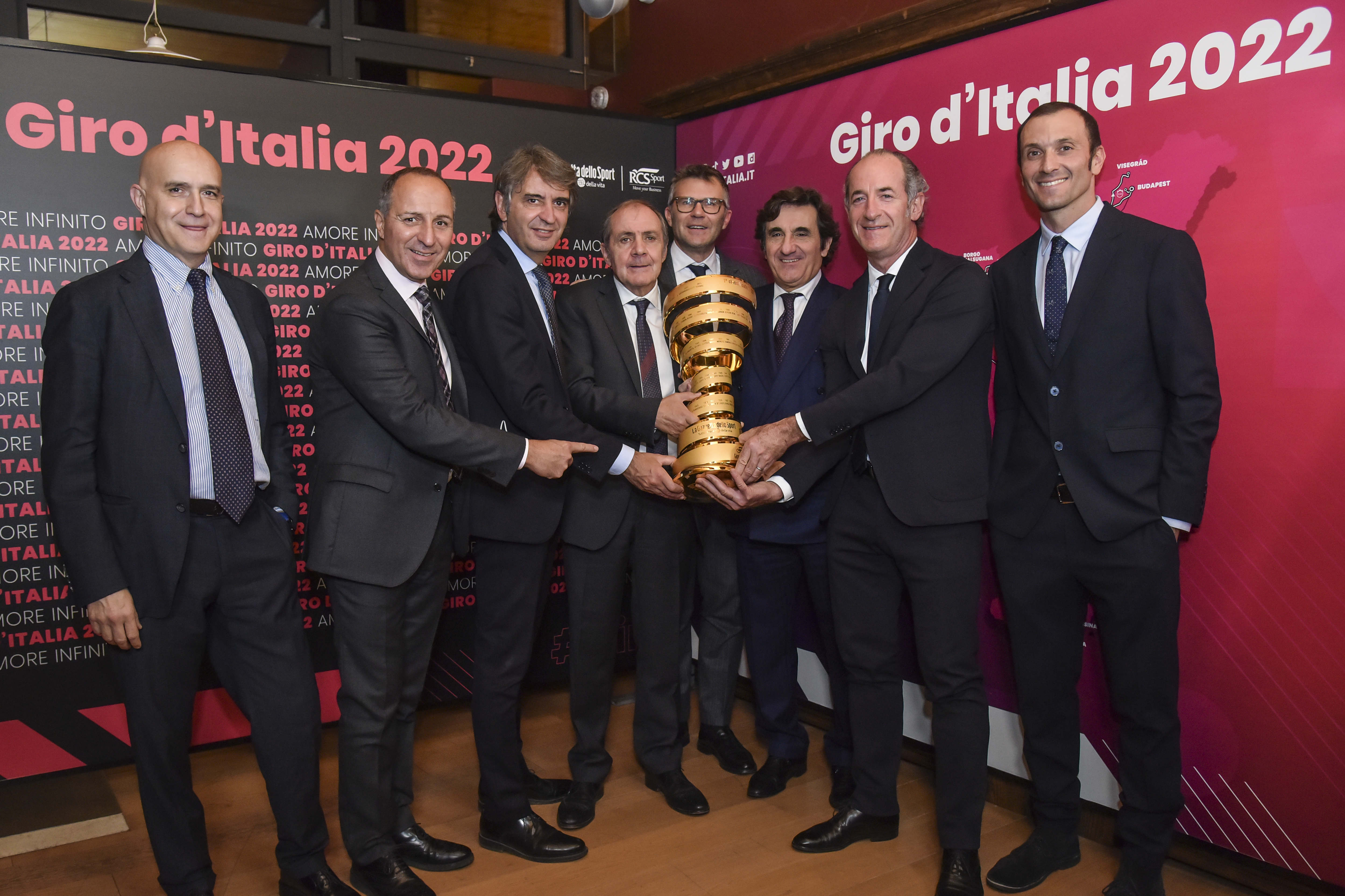 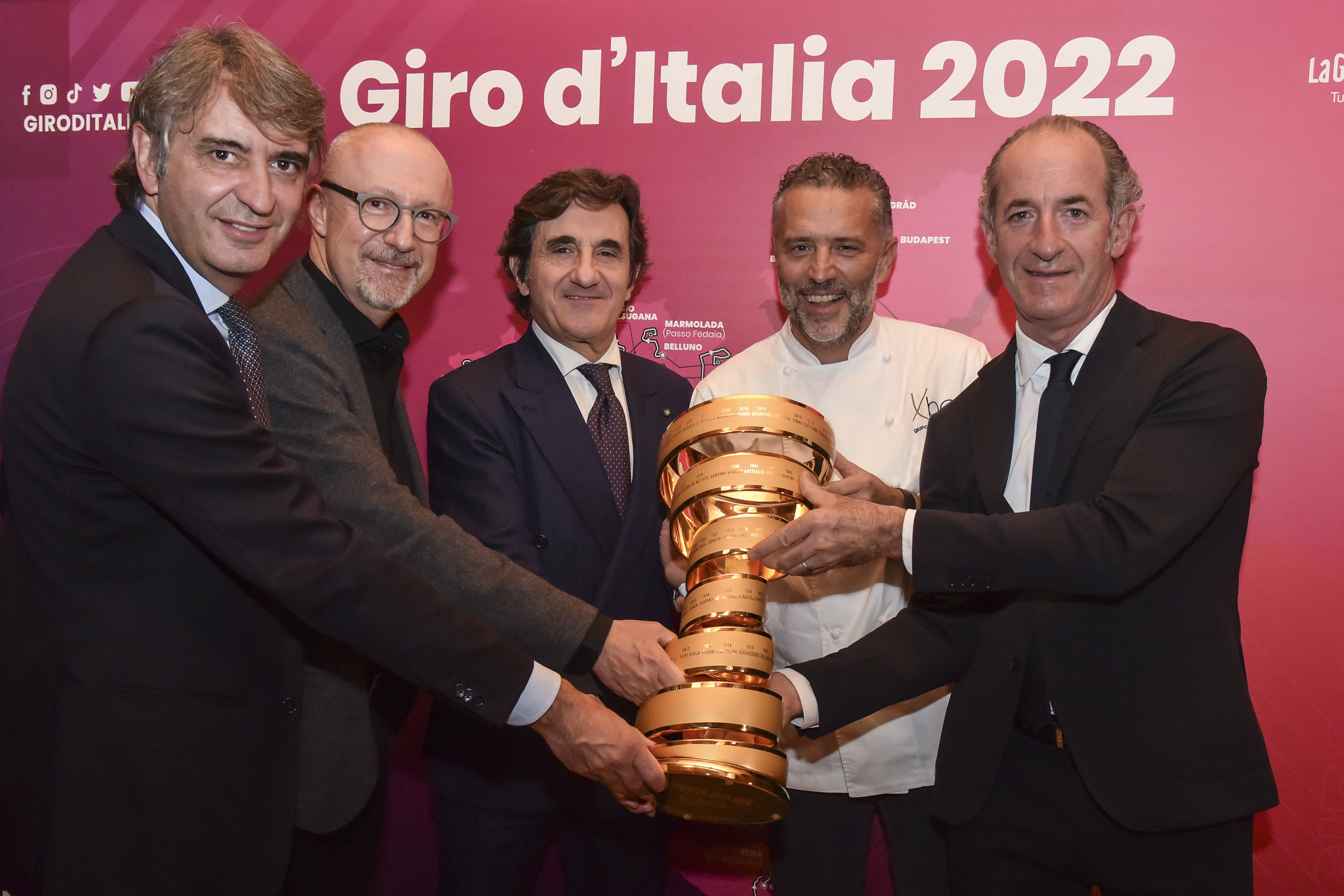 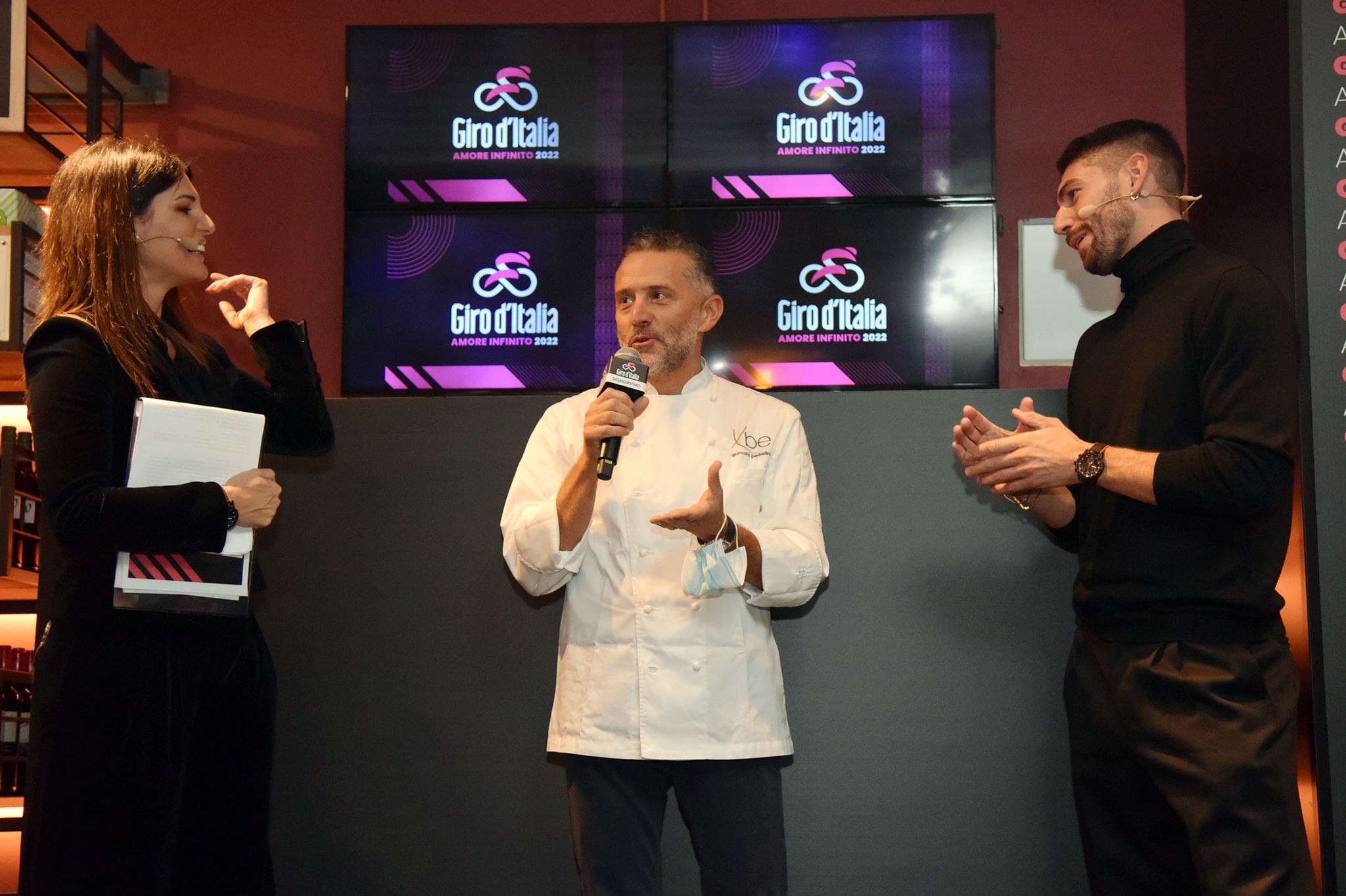 The Specialissima Giro 105 was also presented, in which Bianchi produced a limited edition of 105 copies – the number of editions of the Corsa Rosa.

The event was attended by Italian Minister of Agricultural, Food and Forestry Policies, Stefano Patuanelli; Governor of the Veneto Region, Luca Zaia; Mayor of Verona, Federico Sboarina; President of RCS MediaGroup, Urbano Cairo, CEO of RCS Sport, Paolo Bellino, Director of the Giro d’Italia, Mauro Vegni, Director of La Gazzetta dello Sport, Stefano Barigelli, President of the Italian Cycling Federation, Cordiano Dagnoni, in addition to the representatives of many partners of the Corsa Rosa and of the riders, including Alberto Bettiol, Davide Formolo and Lorenzo Fortunato. 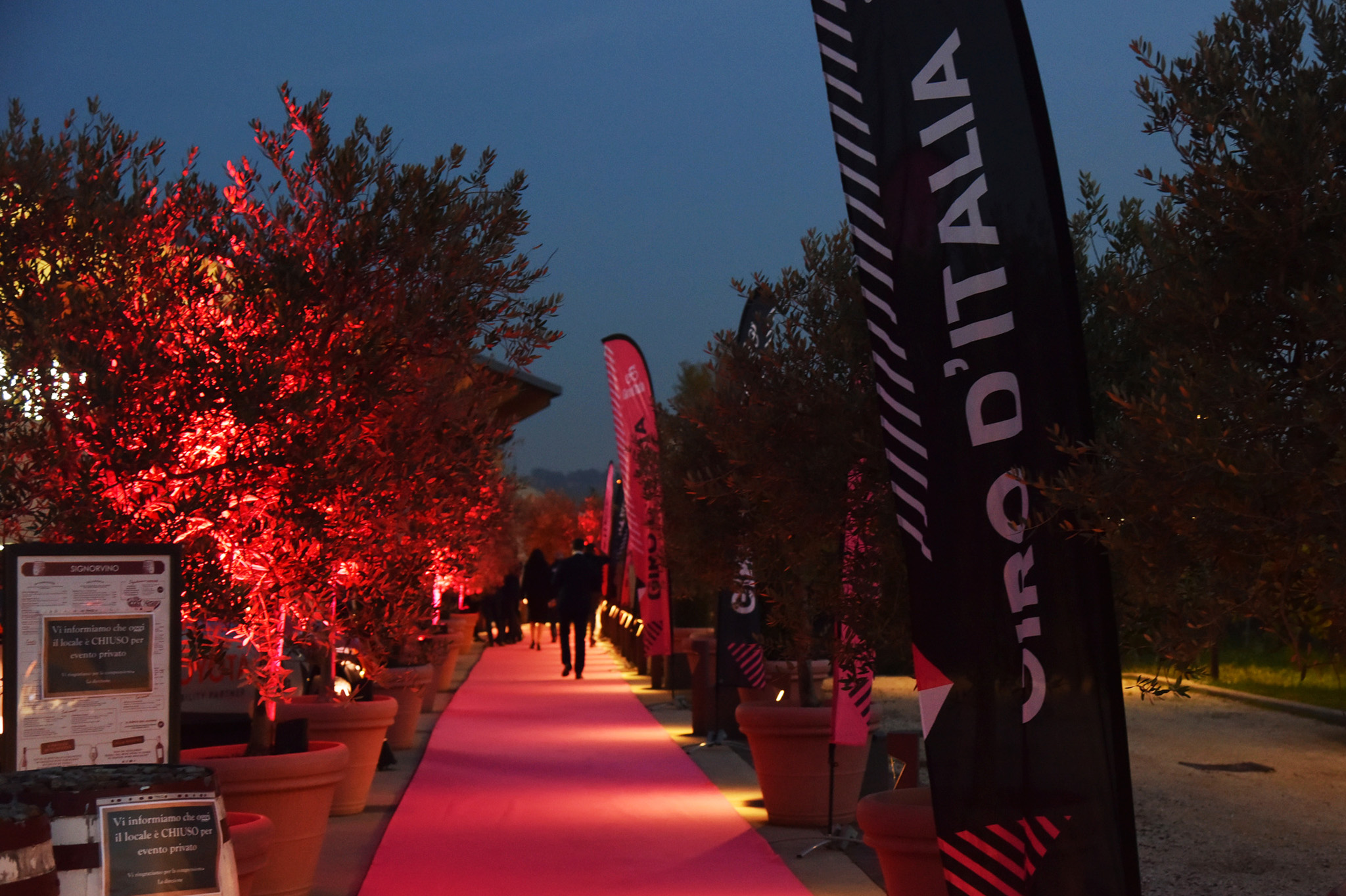 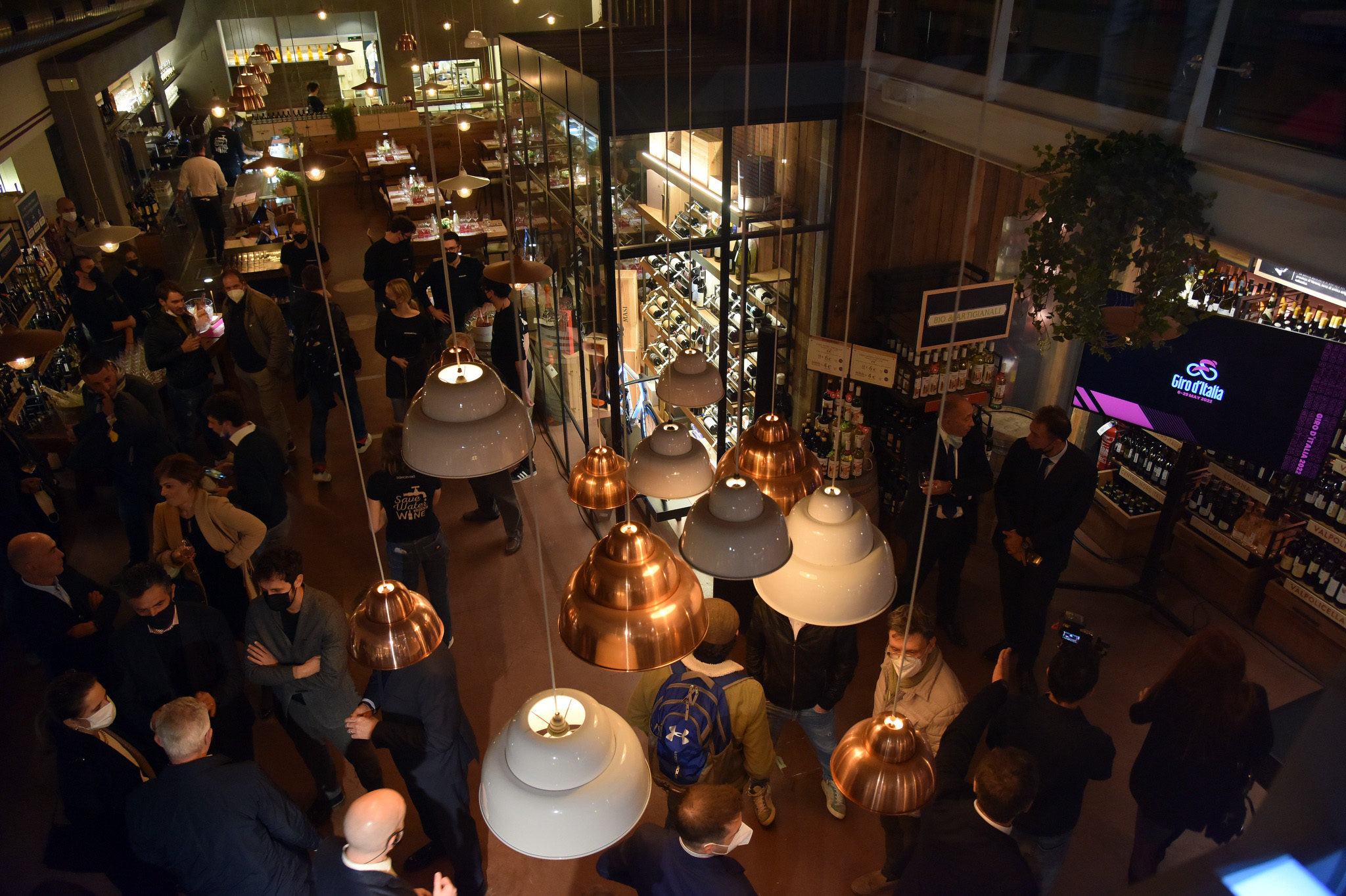 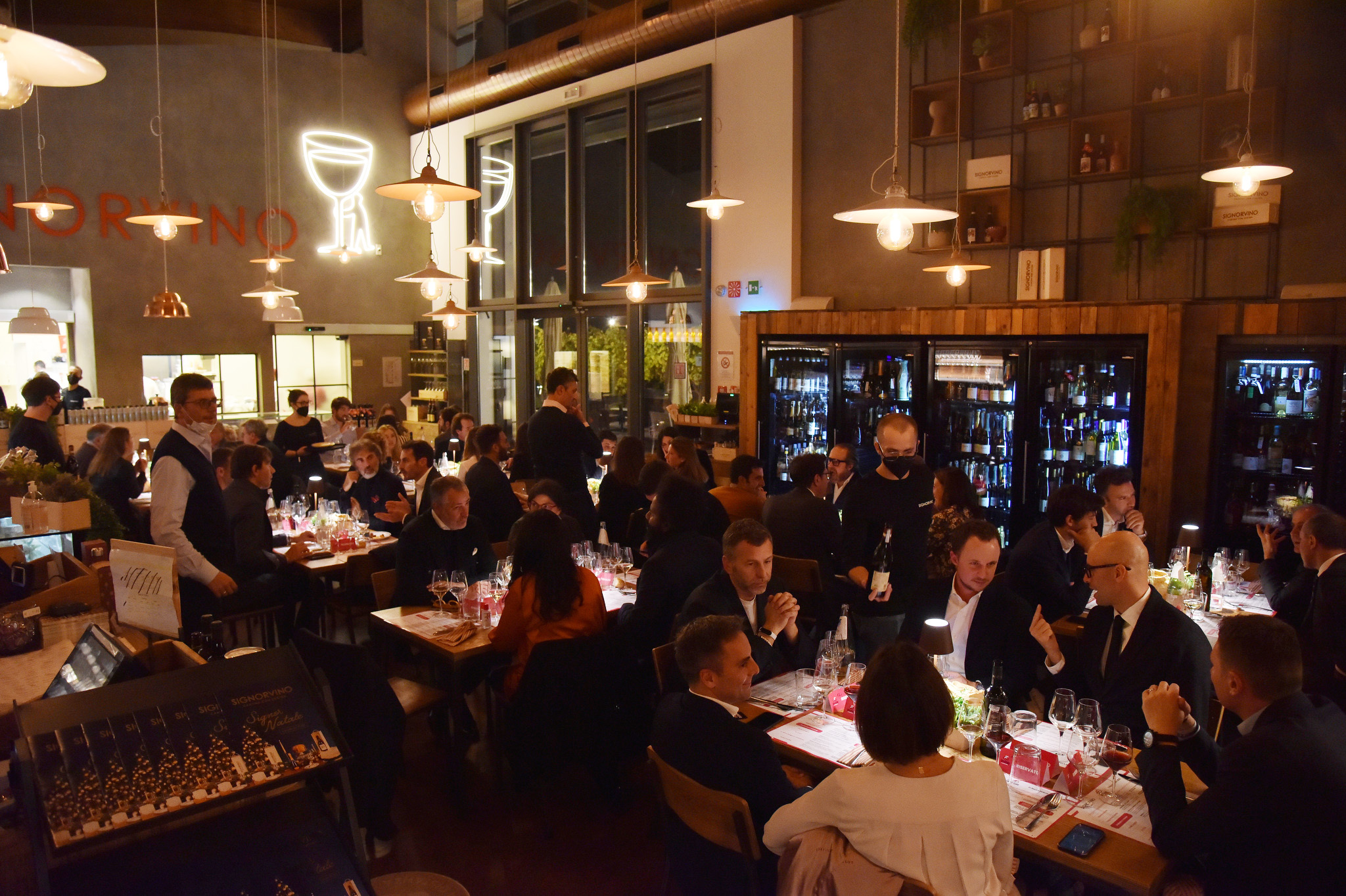 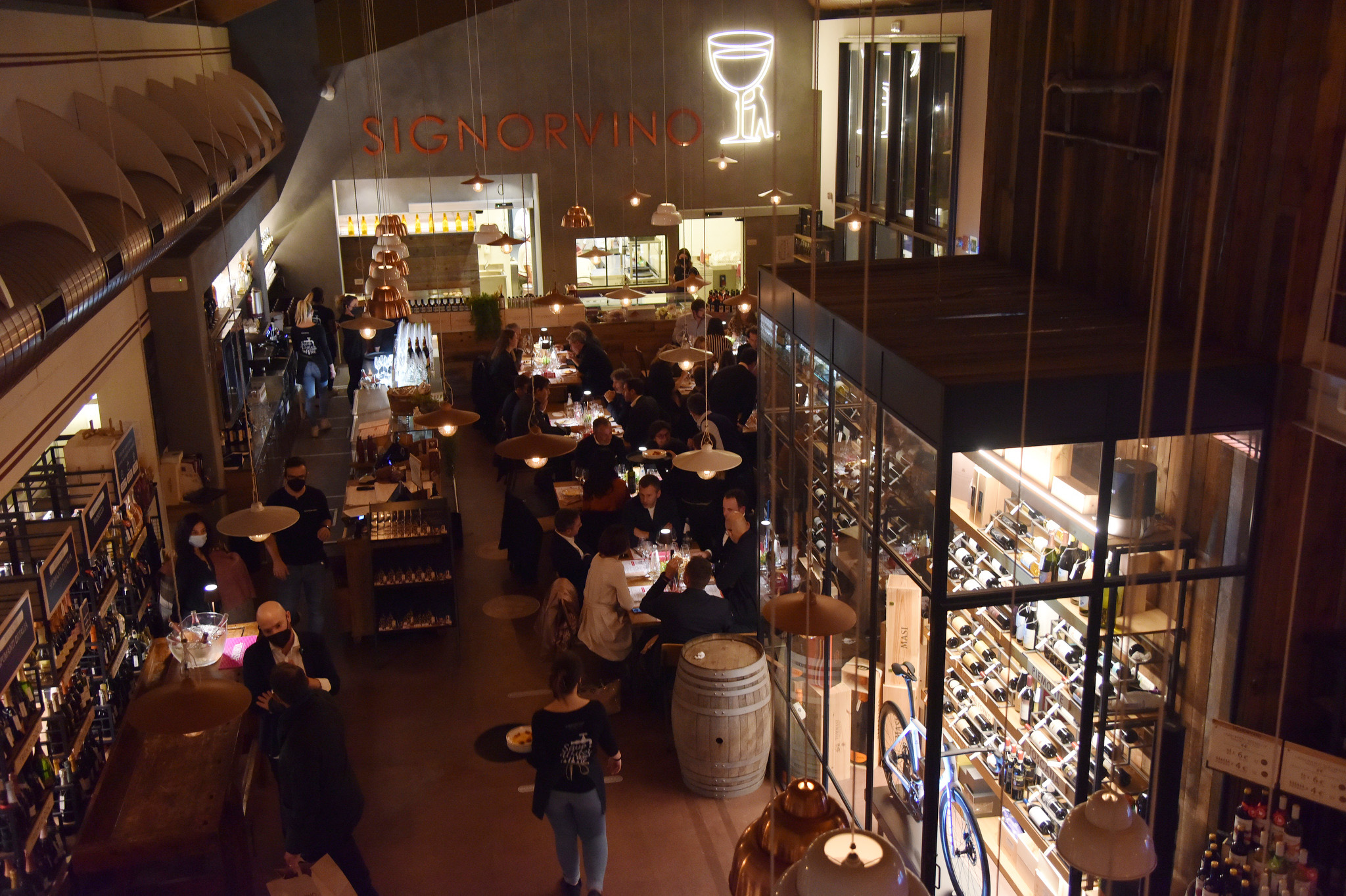 Italian Minister of Agricultural, Food and Forestry Policies, Stefano Patuanelli said: “Every single place in our land is an excellence, and excellence can be amplified, in this case, by the Giro d’Italia. In the weeks of May, it is as if we all became cyclists. The Giro is enthusiasm and a unique story”.

Sandro Veronesi, President of Gruppo Calzedonia said: “Hosting this event here at Signorvino in Valpolicella is not only a “sport” pleasure but also a unique food and wine experience among wines and typical Italian dishes. With Intimissimi Uomo we also stimulate a passion that is shared by many men, just like the Giro d’Italia: all ‘Made in Italy’ excellences”.

Chef Giancarlo Perbellini said: “In dedicating the dish to the Giro d’Italia in Verona, I was inspired by a much loved local traditional recipe. I wanted to enhance it in a contemporary way, putting semolina pasta inside the pasta egg. These two ancient traditions of Italian cuisine – one born in the north, the other in the south – interact well together in a dish with the right accompanying ingredients. I wanted to propose the recipe in two versions, an Autumn-Winter dish, which sees the pasta and bean ravioli served with radicchio and chestnuts. The other, a Spring-Summer dish, with tomato emulsion and Monte Veronese. The first is characterized by its intense flavor, very round. The other is more delicate and sweet. They were designed to accompany the two moments of the upcoming new edition: the announcement of the arrival in Verona, of one of the most important sporting events in Italy, and that of the final stage with the coronation of the Maglia to Rosa in the Arena.”

Cordiano Dagnoni, President of the Italian Cycling Federation said: “The Giro d’Italia, the cultural and sporting heritage of our country, returns every year as a big party that crosses the peninsula. I got to see the route and I must say that the arrival in Verona is very impressive. I remember the roar at the entrance to the Arena for the feat of Francesco Moser in 1984, who managed to triumph over Laurent Fignon. A Giro that promises to be important and of which I have identified two moments not to be missed – The Mortirolo, the Lombard climb that launched the Pirata, and the Blockhaus in Abruzzo. Have a good ride everyone.”

Alberto Bettiol (EF Education–Nippo) said: “It’s a Giro that I like, looks very hard. There are many stages suitable for me, especially the mid-mountain ones. I’ll do everything to be at the start.”

Lorenzo Fortunato (Eolo–Kometa) winner of the Zoncolan stage of the Giro d’Italia said: “Next year we await the invitations of the organizers. In the meantime, I studied the maps of this Giro and there are important climbs, I would like to try again to win a stage while trying to do well in GC, maybe in the top 10”.

Davide Formolo (UAE Team Emirates) said: “It is a special Giro for me since it ends right in the land where I was born. There are many challenging stages and it will be important to be 100% from the first week. The grand finale in the Arena di Verona will certainly be exciting”.