THE 2021 MAGLIA ROSA, DESIGNED BY CASTELLI, IS UNVEILED.

This year, the Giro d’Italia celebrates 90 years of the Maglia Rosa, worn to date by 254 riders. The 2021 Maglia Rosa will have the names of all of those who’ve worn it written on the jersey. In addition, a phrase from Dante Alighieri’s Divina Commedia – “Disposto a salire a le stelle” (“Willing to rise to the stars”) – chosen from many submitted on the Giro’s social networks will be imprinted inside the collar. For the occasion, a communication project’s been in development and will begin on 8 March with a virtual exhibition. This is in collaboration with the Ghisallo Museum and focuses on the history of the Maglia Rosa. Finally, a weekly social-media initiative will revisit a decade in the history of the Maglia Rosa, starting from 1931. 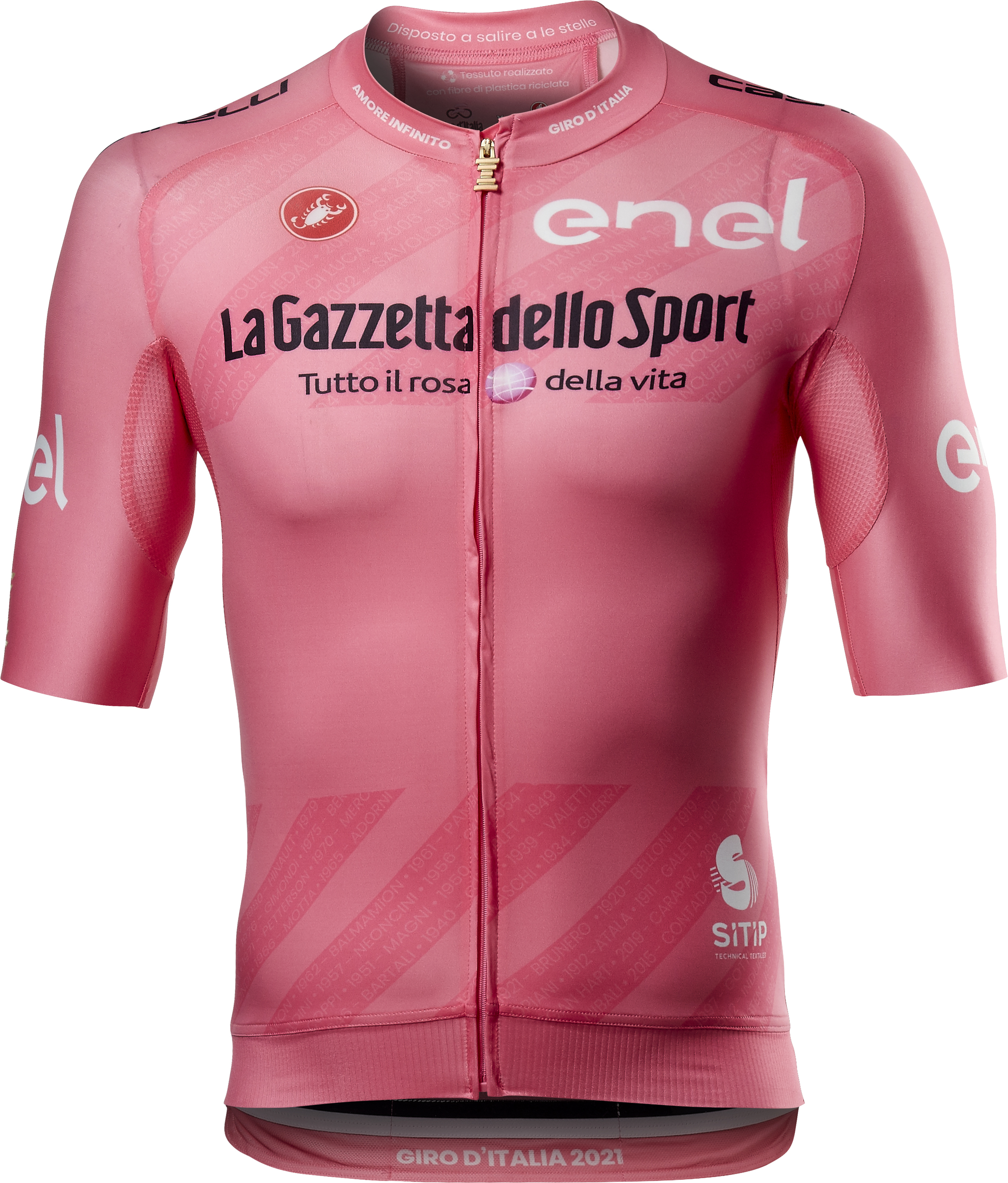 The Giro d’Italia is preparing to celebrate its symbol, the Maglia Rosa, which turns 90. The initiative, which runs from March to September, will involve fans of great cycling and especially the fan base of the Corsa Rosa.

An icon of professional cycling, the Maglia Rosa was introduced in 1931 by Armando Cougnet, sports journalist for La Gazzetta dello Sport, the newspaper that created the Giro d’Italia over 20 years earlier. The idea was to identify a symbol that would make the rider at the top of the General Classification visible, to allow spectators to distinguish him from all the others. Back in 1931, the first to wear the Maglia Rosa was Learco Guerra from Mantua. It’s a tradition that lives on to this day at the most important cycling stage race in the world.

The inspiration for the 2021 Maglia Rosa came from seeing 2020 winner Tao Geoghegan Hart in Rosa for the first time on the final podium in Milano. By wearing this iconic jersey, Geoghegan Hart, like all who’d gone before him, entered into cycling history. Now, in 2021, the wearer of the Maglia Rosa will wear the names of the past winners wrapped around the stripes of the jersey like on the Trofeo Senza Fine. It’s a true homage to the 90 years of the Maglia Rosa, complemented by a gold logo on the upper back to go along with the gold zipper pull and the Trofeo symbols on the sleeves.

It’s not only the heritage that’s celebrated with this jersey. The new Maglia Rosa has been developed in the wind tunnel for aerodynamics without compromising lightweight and breathability. Together with fabric producer Sitip, 100% recycled yarns have been used to lessen the environmental impact of a jersey that both celebrates the past and looks ahead to the future. 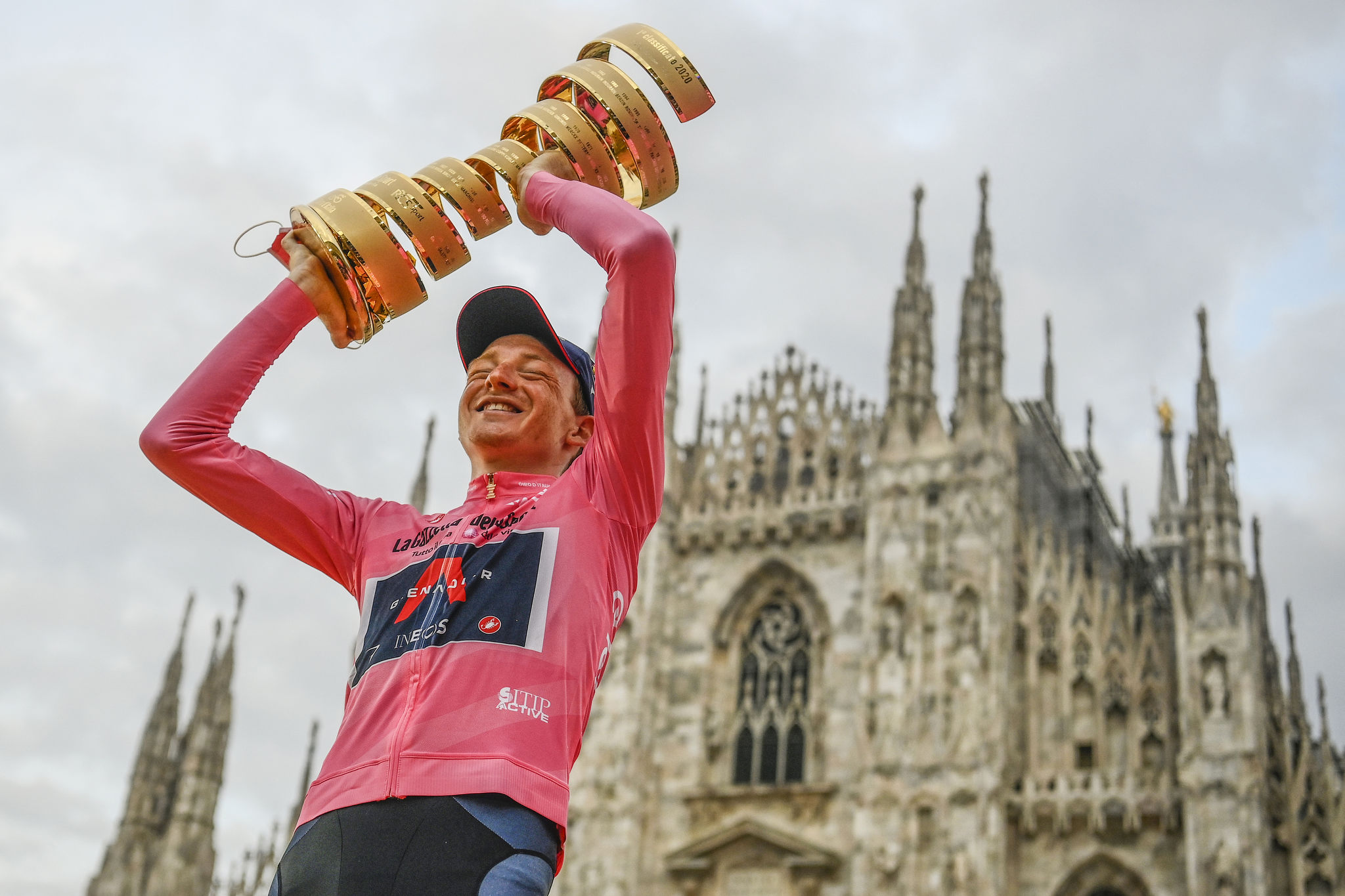 From the beginning of March, RCS Sport, organizer of the Giro d’Italia, will start an initiative dedicated to the celebration of the Maglia Rosa. From Monday 8 March, an interactive virtual exhibition will be online, designed in collaboration with the Ghisallo Museum and ACdB, which will allow fans to immerse themselves in the history of the Giro d’Italia.

Starting on that same day, and running over the following nine weeks, is a memorable story rich with historic images, never-seen-before videos, articles and La Gazzetta dello Sport front pages that chart the greatest victories of the Maglia Rosa. The story will be divided over decades and the content will be visible on the social profiles of the Giro d’Italia.

A social initiative for the Corsa Rosa community (currently over three-million people) will also be staged between March and April. It has the title La Maglia Rosa dei 90 anni and will see fans vote for the most loved Maglia Rosa ever.