The world is said to be made up of many forms of time: time before time and time after, earthly and divine time, the time of the ancestors, the dreamtime, the time of judgment, all coexisting, all strangely simultaneous.

And, at the end of them all, according to some, there is a reckoning, a gathering up of time, and then, perhaps, no time at all. If so, then the world is like the Giro, which, this year, at least, sees the gathering up of time spread out over two days. 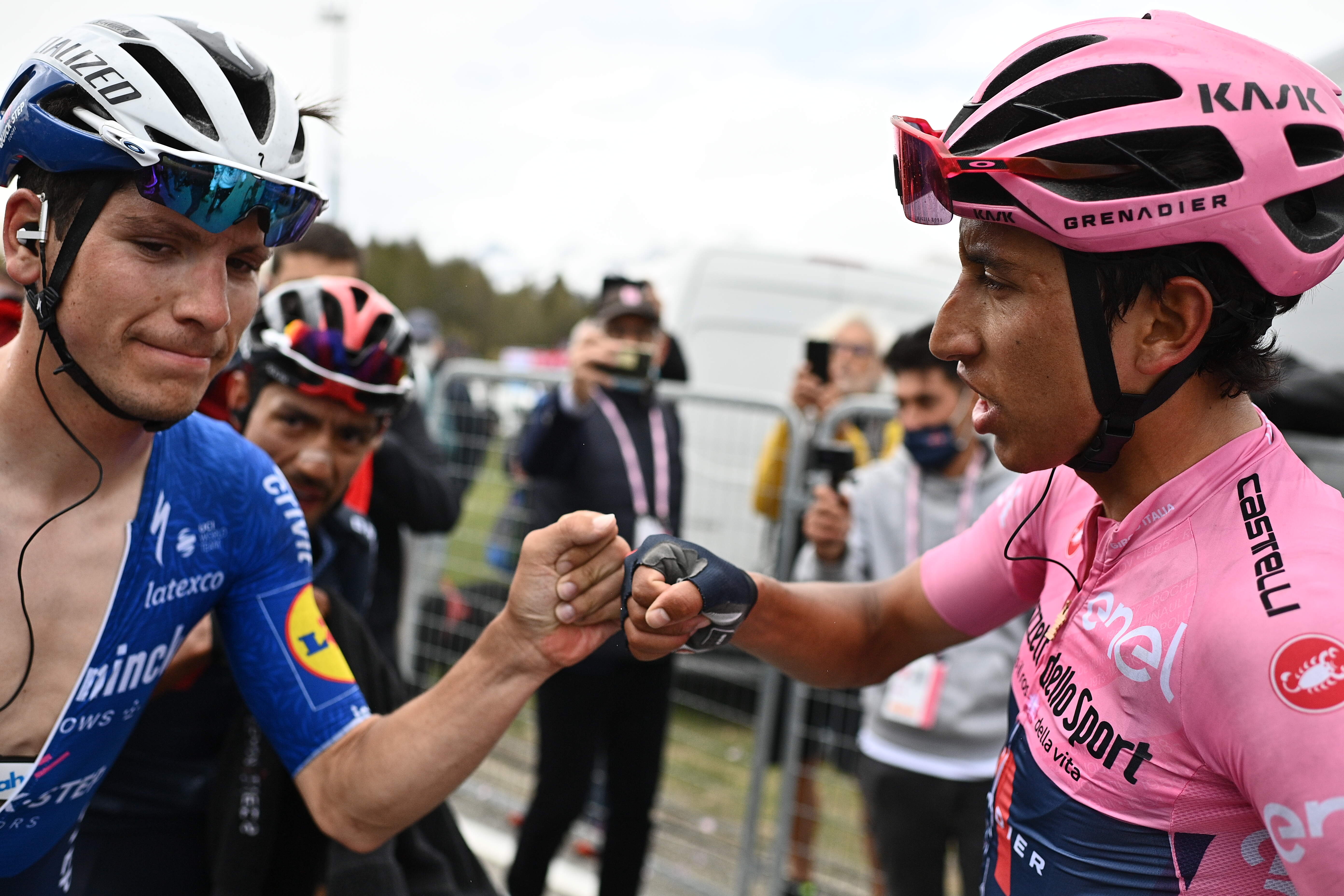 The first of them was book-ended by intermediate sprints, and they were two of the most enjoyable moments of the stage. When Dries De Bondt followed Umberto Marengo across the first of them, at Cannobio, he secured the Traguardi Volanti title. Peter Sagan had no need to monitor the sprint, but did so anyway, perhaps as a nod to his agent, Giovanni Lombardi, who won a stage out of Cannobio in the 2003 Giro. It allowed him finally to celebrate winning the Maglia Ciclamino. It has not been the Slovakian’s most swashbuckling performance, but most pros would be happy to take a stage win and the jersey while performing under-par.

When last year’s Traguardi Volanti winner Simon Pellaud made it into the leading group, he ensured he would win the Fuga Bianchi breakaway competition. Meanwhile, Geoffrey Bouchard crossed the Passo San Bernardino sixth, taking 4 points. This left Bernal needing to win both of the final climbs to deprive the Frenchman of the jersey.

On the descent, Team DSM’s Chris Hamilton, Michael Storer and Romain Bardet attacked with over 57 km to go Damiano Caruso’s instinct was to follow; it was to prove well founded. Bilbao set the pace on the descent from the Splügenpass, then Caruso dropped Bardet just before the second intermediate sprint, in Madesimo, 2.5 km from the finish line. He crossed alone, taking maximum bonus seconds, then pressed on towards a well deserved victory. Behind him, Egan Bernal’s final domestique, Dani Martínez, pulled aside to let his leader take the final bonus second, then resumed his position at the front. It showed his clarity of thought, despite riding at a pace that, moments later, Simon Yates and João Almeida would find themselves unable to follow. 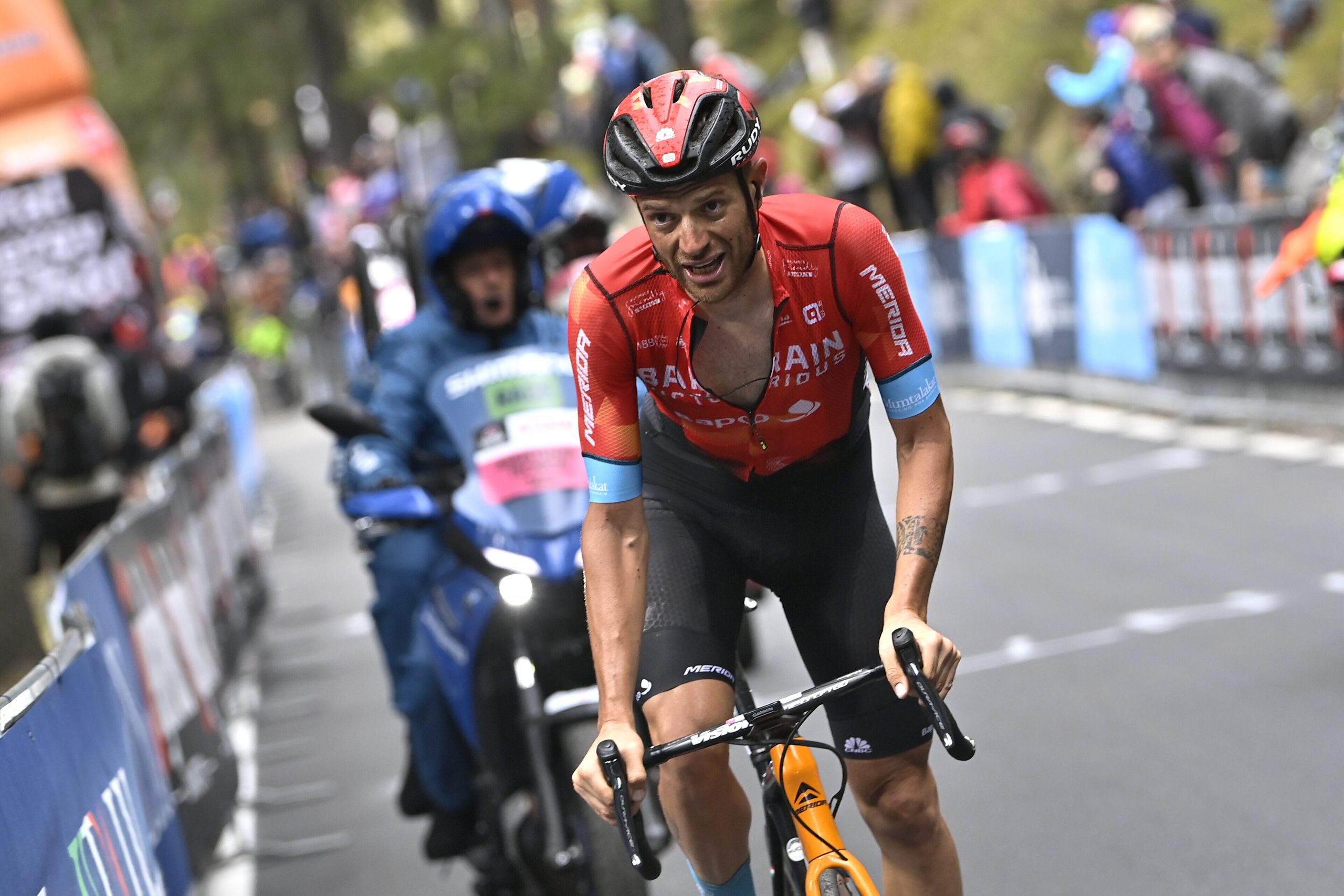 Martínez led the Maglia Rosa past Bardet under the flamme rouge, then Bernal darted away to limit his losses to his closest rival. To Caruso he conceded 24”, plus 4 bonus seconds. On his most feared rival, Simon Yates, he gained 51”, plus 6 bonus seconds. 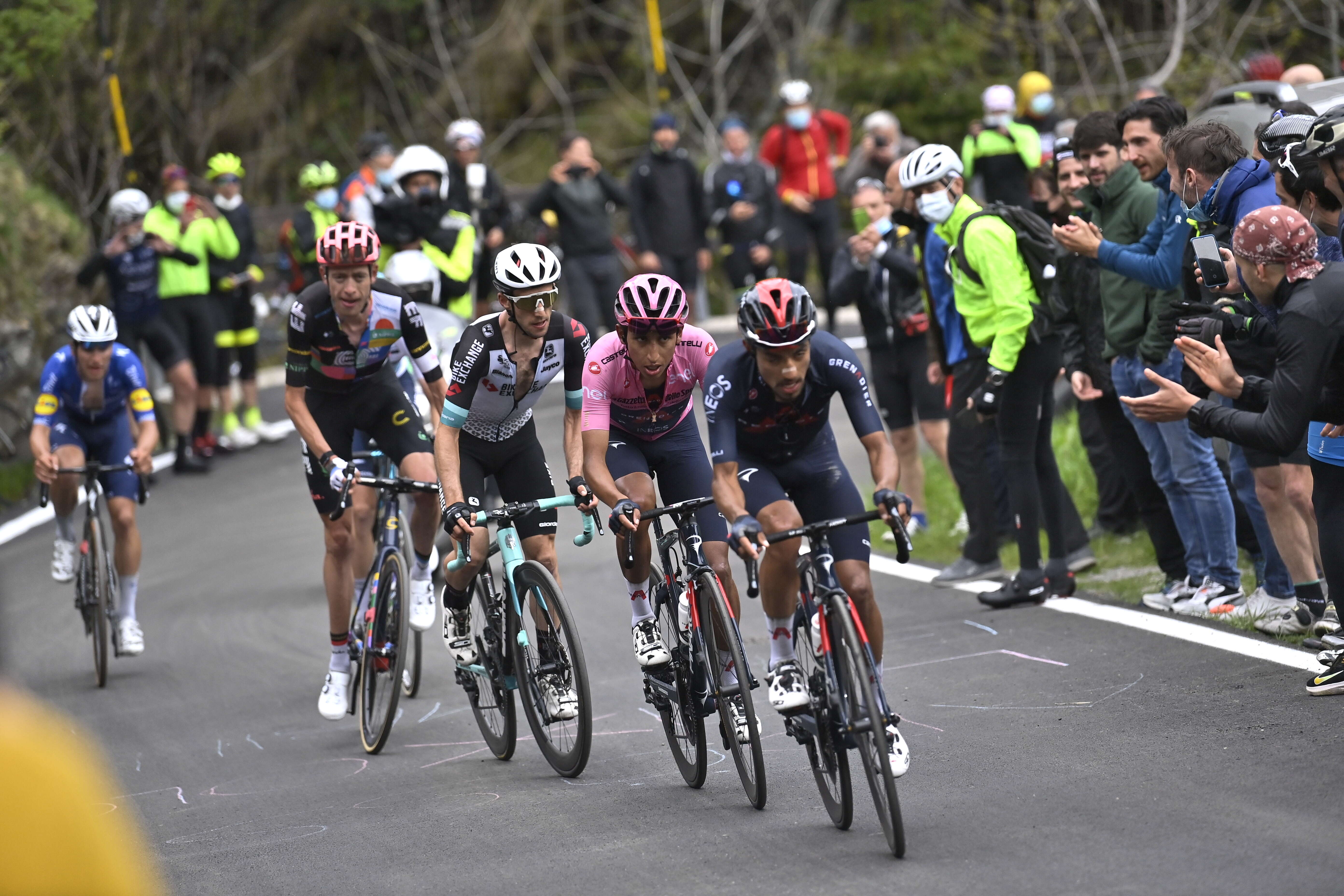 After the stage, Egan admitted, “It’s not the best scenario when second in GC is nearly a minute ahead of you, but I still had teammates, so I tried to use them well and arrive as fresh as possible for the last climb, and then for tomorrow. I think we did well and managed the situation well.”

He managed it for Dries De Bondt too: it was only when Caruso won the stage that the Belgian champion could be sure of victory in the Combattività competition.

The final gathering up of time take place in tomorrow’s 30.3 km time trial. Egan Bernal starts with a 1’59” advantage over Caruso. The Sicilian gained 6.46” on him in the first time trial, or 0.722” per kilometre. At the same rate, Bernal can expect to lose 21.9” tomorrow. If his teammate Filippo Ganna,rewarded with a stage start at home this morning, can win the stage as expected, it will be a decent bit of management indeed.