Until the 1920s, cycling had more in common with feats of heroic resistance than high speed racing. It was less about aerodynamic dynamism than it was about doggedly "never giving up." Today, the Giro d'italia reverted to those pioneering times.

There is something supremely honest about Remco Evenepoel. Before the stage, asked just how strong he felt after impressing Filippo Ganna yesterday by climbing on the big ring, he played it down.

“I don’t know. Maybe I just forgot to shift the gear.”

With 20 km to go in today’s stage, the camera peered through the rain at Remco’s face. He was wearing no dark glasses, and the black stress lines under his eyes were plainly visible. Only then did it become clear what we were looking at: an excruciating, old-fashioned ordeal. 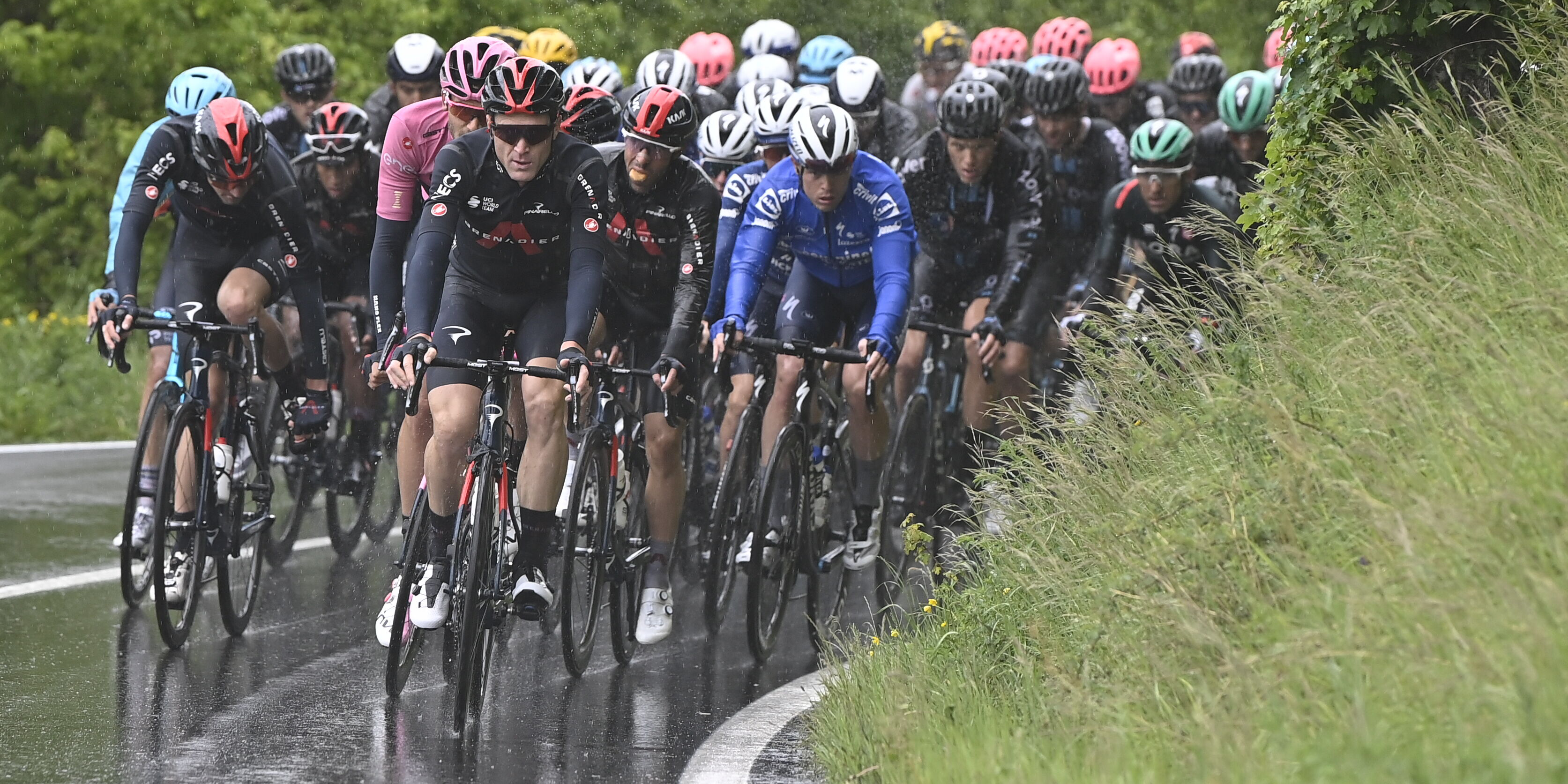 It was only after many decades of cycling history – some say in the 1920s with the Pelissier brothers, and men like Ottavio Bottecchia – that speed became the principle feature of professional cycling. Until those days, it had more in common with walking to the south pole. It explored every human quality except the ability to ride a bike at 40, 50, 60 kilometres per hour for hour after hour after hour.

Rarely does the Tour de France, which bagsed the July calendar slot early in the game, revert to its gruelling origins. But, without even speaking of the high Alps and Dolomites, the Italian Apennines can be cruel in May, and the hilly, low altitude stages can do more damage that the long, showpiece climbs. Remember last year’s carnage in the stage starting and finishing at Cesenatico? 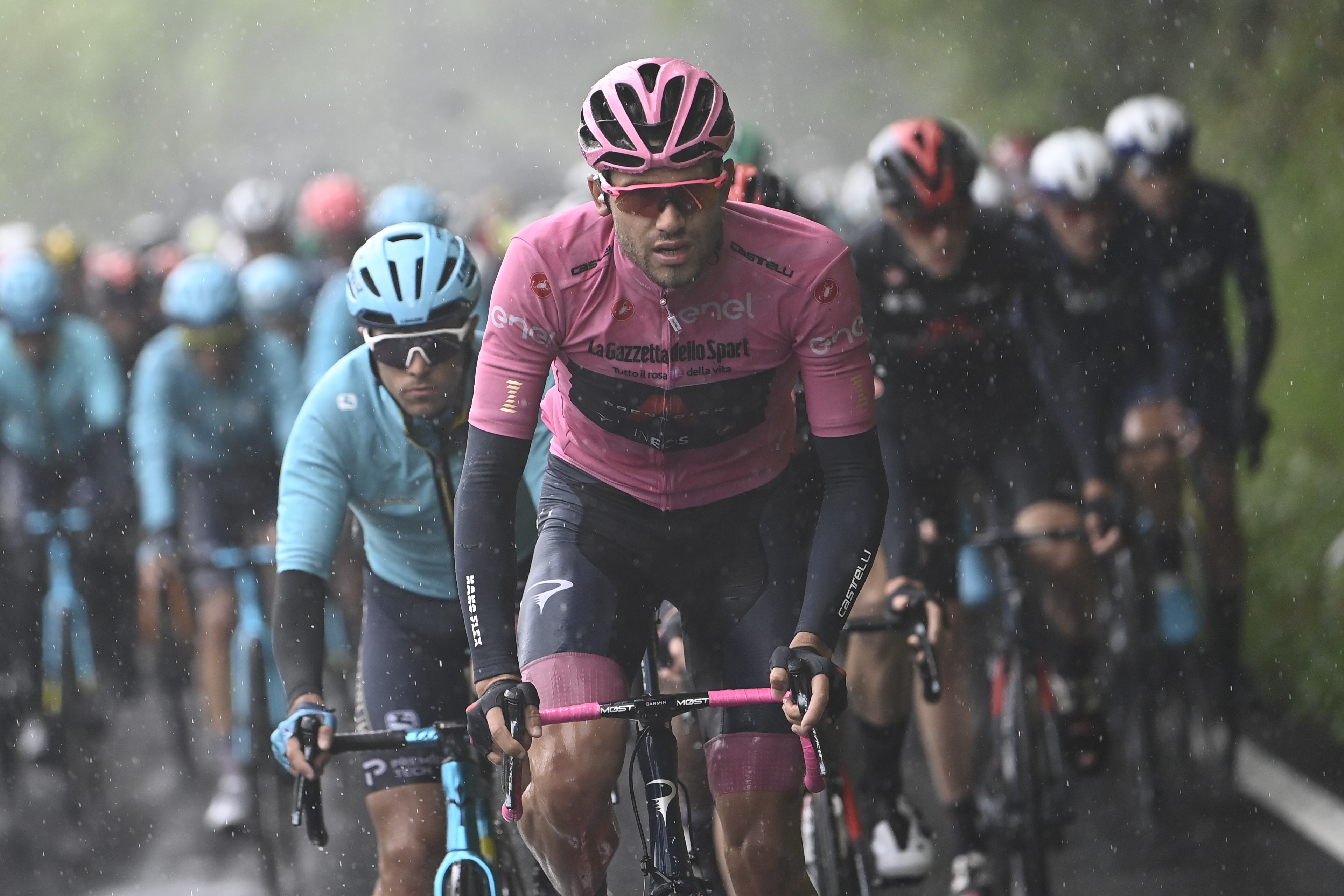 With 5 km to go, we were looking into Davide Formolo’s eyes and seeing a man close to desperation. It was only then it became clear that João Almeida, so impressive last year, and this, in the stage one time trial, was losing ground. He would finish the stage 49th, 4’21” behind Egan Bernal, all sinew, but one of the most resistant to the conditions today. With 5.5 km to go, Ciccone attacked. A kilometre later, Landa set off after him. With 3 km to go, Vlasov darted out of the group, with Caruso on his wheel. Then Bernal flashed away from the nest formed by his teammates, like a bird of prey. He flew by the Russian and his shadow, and, in a matter of seconds, he was with Landa and Ciccone. Presently, Carthy followed into the group of four, with Vlasov on his wheel. Bernal jumped again, but ran out of gradient, and had to settle for outsprinting his four followers to the line. It was the first time we have seen his dazzling acceleration on the climb since the 2019 Tour de France. It may have gained him only 11 seconds on Remco today, but the resilience he showed in punishing conditions augur well for his Giro d’Italia ambitions. 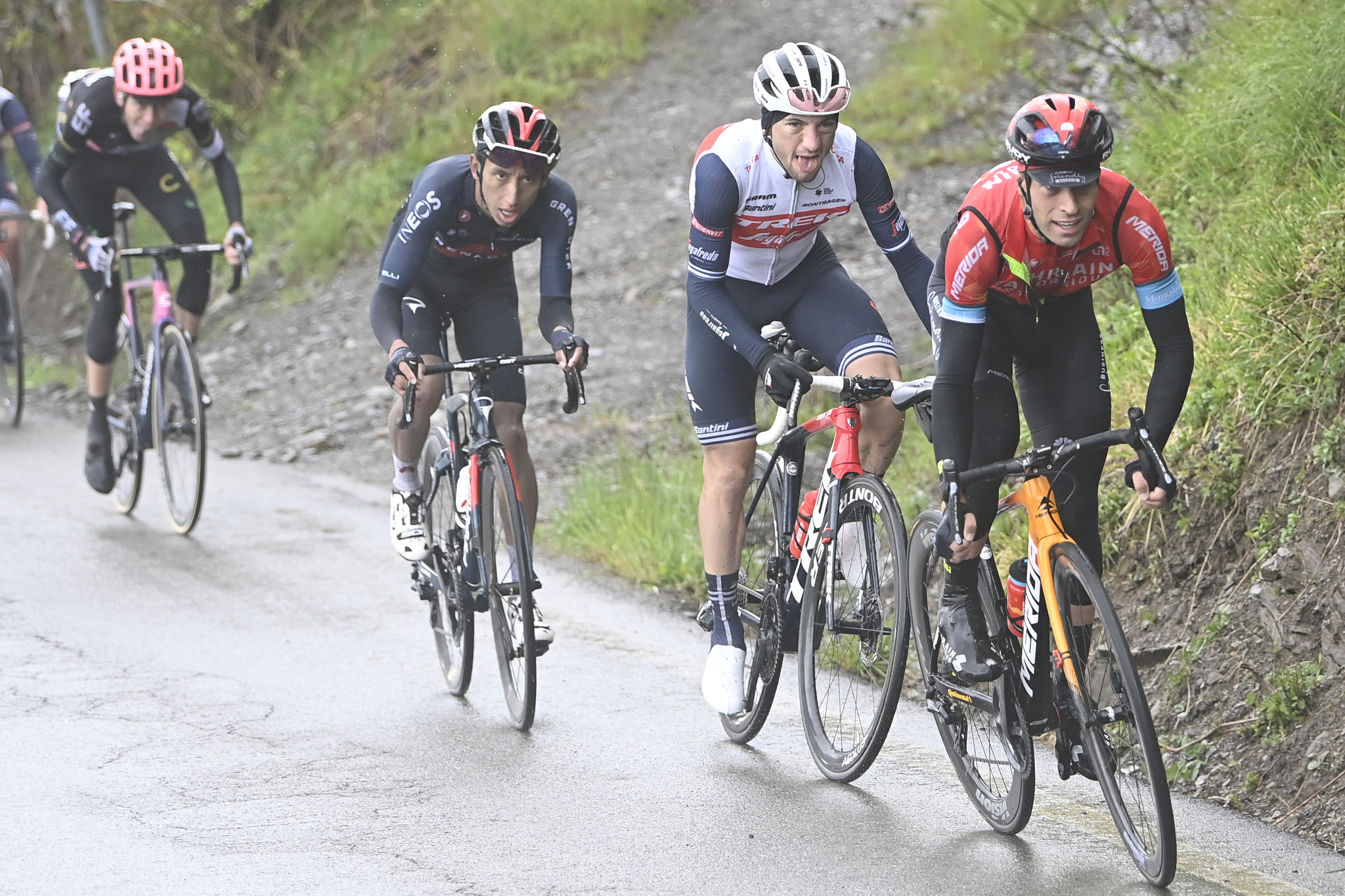 1’37” before Bernal finished, Joe Dombrowski won his first professional race outside the USA, after joining the right, 25-man breakaway. 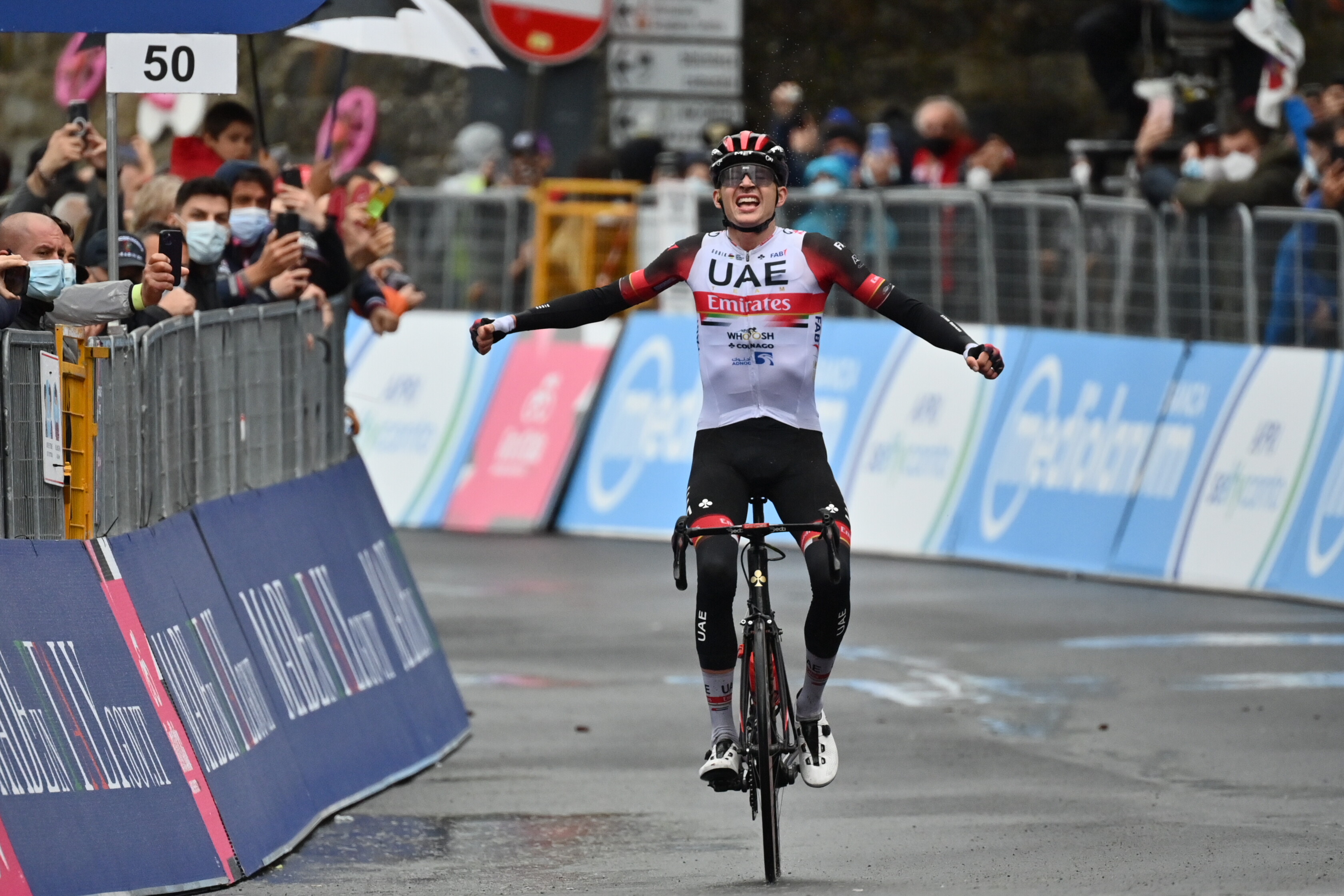 Behind him, his fellow escapee Alessandro De Marchi took the Maglia Rosa.

‘It’s every cyclist’s dream, especially if you are Italian, although I was scared I had lost the oportunity in the middle of the race, when there were three guys up the road with a good lead. But the old saying “Never give up” proved to be true today.’ 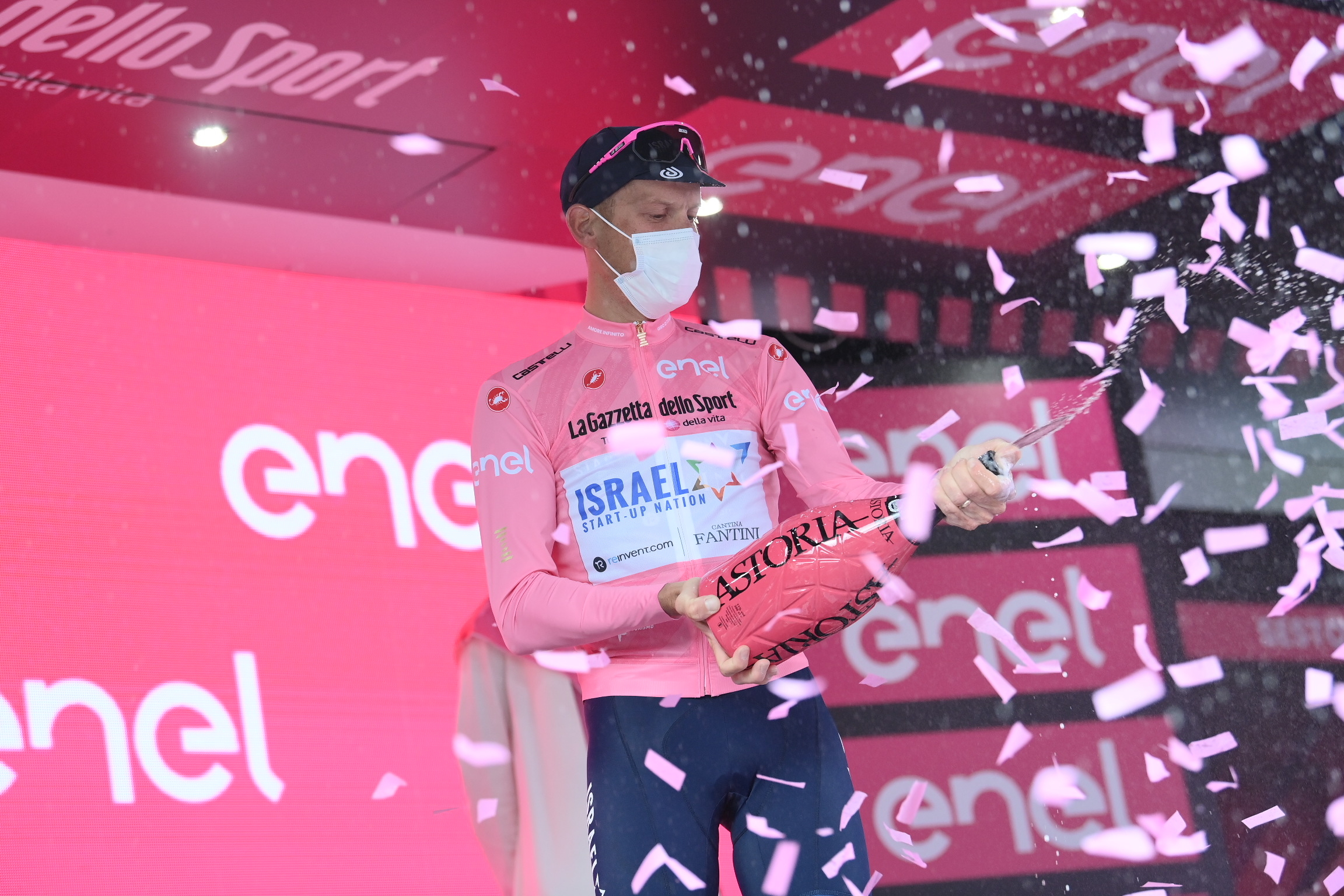