THE TEAMS TO START 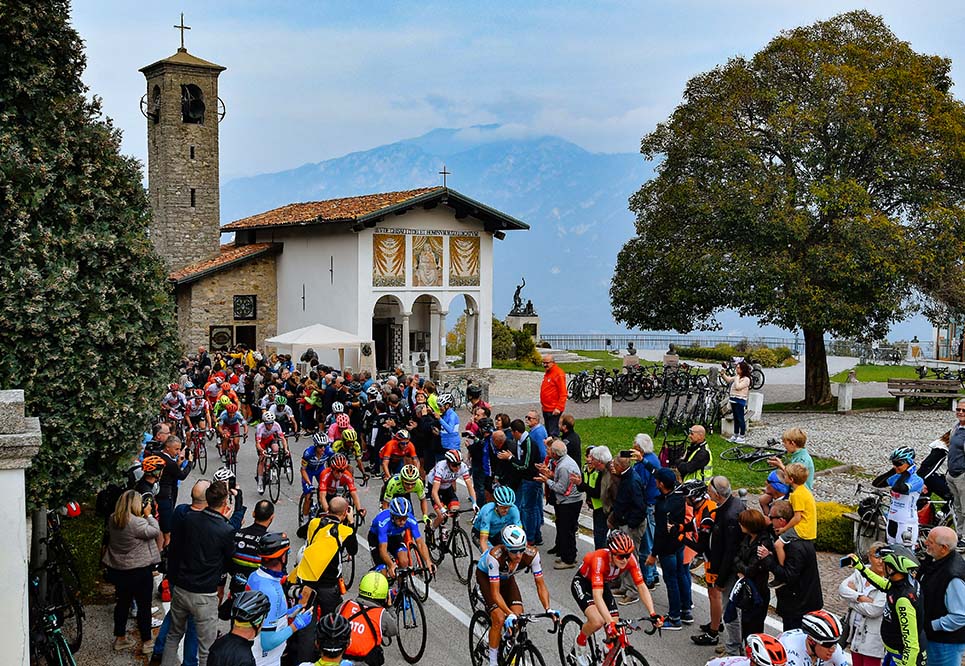 After departing Bergamo in a southerly direction, the route crosses the Bergamo plain in its first 40km to head up the Cavallina valley to Casazza where the Colle Gallo – the first ascent of the race – is tackled. Colle is followed by a fast descent returning from the Seriana valley to Bergamo, then the route re-enters lowland roads that lead to Brianza. There’s a short passage to Colle Brianza and a descent to Oggiono, then the route passes through Pusiano, Canzo, Asso and down the descent to Onno and on to Bellagio. This is where the Ghisallo ascent – with gradients of up to 14% on wide roads with hairpin bends – begins.

The following very fast descent is on long straights and ends at Maglio where, immediately after a right turn, the climb of the Colma di Sormano begins. After a few kilometers of medium slopes, and a few hundred meters after Sormano, the route heads up the Muro di Sormano on a narrow, very steep road – 2km long with a gradient up to 15%. It’s partly inside a small wood, with very narrow bends and slopes that, for around 1km, exceed 25% up to almost 30%.

Once past the Colma, the route follows the descent to Nesso, where the riders then take the coastal road to reach Como. Next they face the hard climb to Civiglio (614m) with slopes almost always around 10% – and with a marked narrowing of the roadway at the top of the climb – before going back down and through Como to hit the last climb of San Fermo della Battaglia (397m). There is one feed zone, at km 128-131.

The last 10km start inside the area of Como on wide avenues, up to the railway underpass where the final ascent of San Fermo della Battaglia begins. The slope is around 7% (max 10%). The route passes several hairpin bends up to the brow at around 5km from the finish. The descent, on a wide, well-paved road ends at the last kilometer.

Il Lombardia presented by UBI Banca will be broadcast on the screens of 185 different countries in the world, with TV coverage in all five continents.

RAI, host broadcaster, will produce three hours of live action from the race and will broadcast the second Classic Monument of the season on RAI 2 in Italy from 15:30 to 18:50 (all times CEST).

On the European continent, La Chaine L’Equipe will stream the race live on their screens in France, as will Eurosport in the rest of Europe, and in Australia and South East Asia: in all these territories and in Japan it will also be possible to follow Il Lombardia presented by UBI Banca thanks to GCN Race Pass.

Belgian fans will also be able to follow the race on VTM Medialaan in Flemish and on RTBF in French. In Switzerland, Il Lombardia presented by UBI Banca will be broadcast by the SRG SSR network: on SRF in German, on RTS in French and on RSI in Italian.

The race will be streamed live on the Fubo.TV and FloSports platforms in the USA and Canada and aired on TUDN in Mexico and Central America, while the ESPN network will cover Brazil (in Portuguese), the rest of South America (in Spanish) and the Caribbean (in English).

Live streaming is available in China on Zhibo.TV, while in New Zealand live coverage will be provided by the Sky Sports broadcaster.