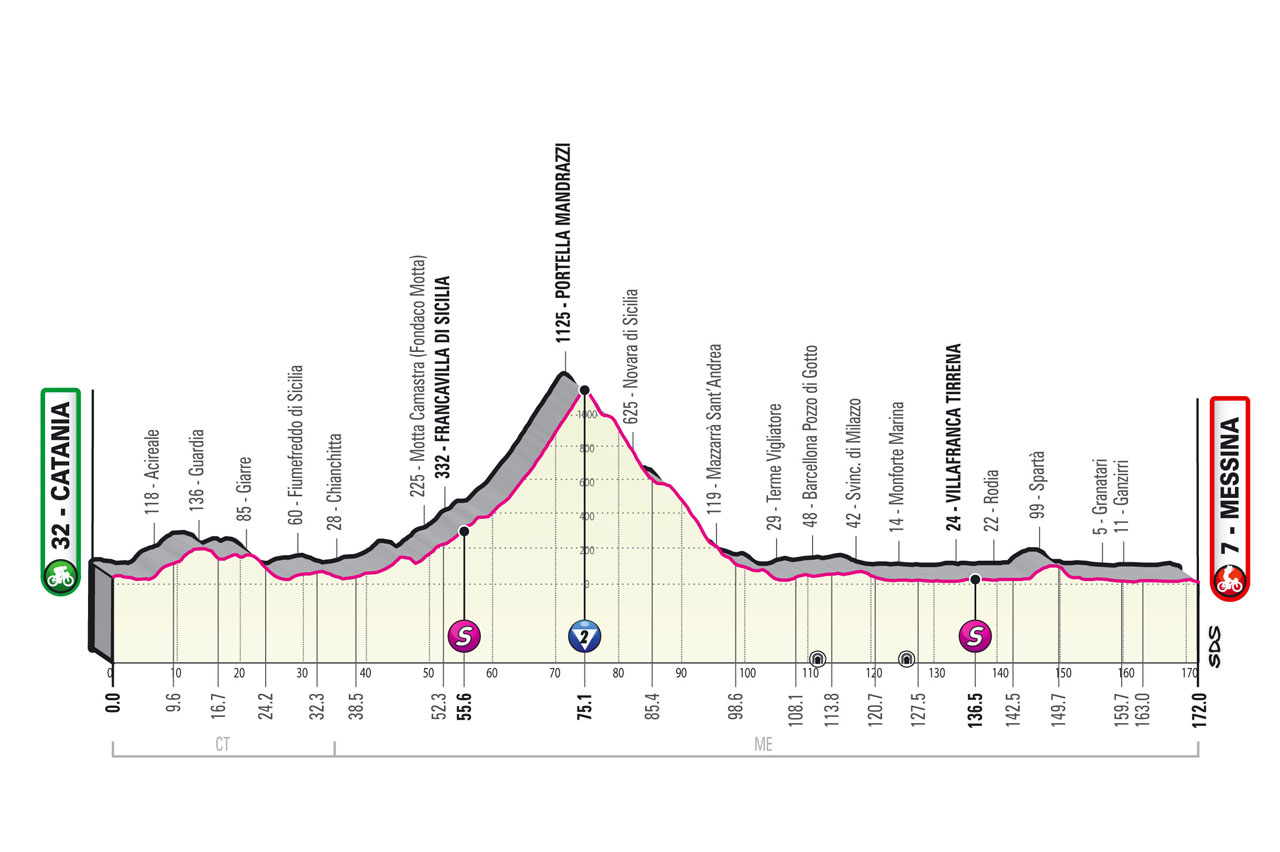 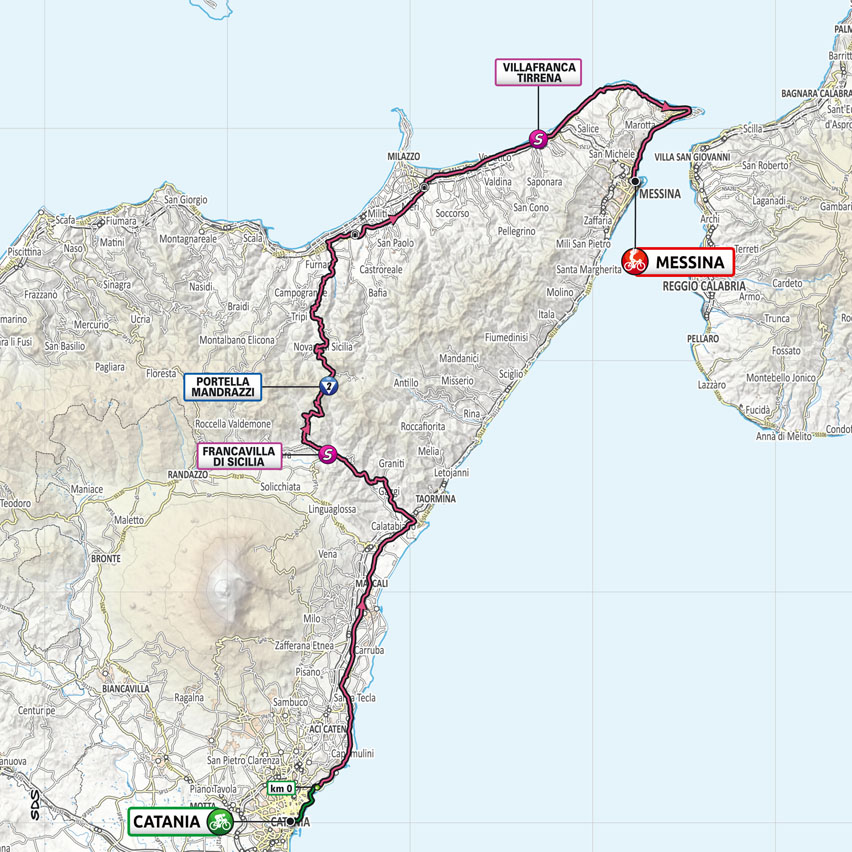 The stage touches many hallmark locations of the Giro in Sicily. The route will take the peloton from Catania to Messina, from the eastern coast, up the mild slopes of Portella Mandrazzi, to the northern coast, hitting Villafranca Tirrena and Ganzirri, with the tall steel tower of the former overhead power line, referred to as Pilone dello Stretto. This will be a sprinters’ stage that will most likely close in a bunch sprint.

Catania is located on the east coast of the main Italian island, Sicily. The city is located on a plain, located between the Ionian Sea and the slopes of majestic Etna, the largest active volcano in Europe, a Unesco World Heritage Site.

Catania’s old town, where you’ll find the main tourist attractions, is easy to explore on foot.

According to Tucidides, Catania was founded in 729 BC by Greek settlers from Calcide in Eubea.

The Romans arrived and conquered Catania in 263 BC. With Augustus Catania it was raised to the rank of Roman colony; The first major architectural feats date back to this period.

With the fall of the Roman Empire Catania suffered the incursions of the barbarian invasions followed by periods of absolute decline.

The Arab presence in Catania has hardly left a trace in the city. With the advent of the Normans in Catania began the construction of the majestic Cathedral-fortress that had arisen in the heart of the town. The choice of the site was dictated by the need to control the port.

Under Frederick II of Svevia, ursino Castle (1239 1250) was built on a headland to defend the southwest side of the city. In Aragonese times it became a preferred residence of the Viceroys.

The eruption of 1669 and the earthquake of 1693 changed the very nature of the Catalonia territory.

One of the authors of Catania’s artistic renaissance was the Palermitan architect Abbot Giambattista Vaccarini who created the conditions of the present city; the flowery “Baroque Catania” is the harmonious set of a uniform architecture for style, materials and decorations, the studied use of the white stone of Syracuse and the black lava basalt of Etna. Original style that is affected by the influences of the “Roman” baroque and the “Spanish” baroque.

In the second half of the nineteenth century, the City expanded beyond the historic Baroque center and new residential neighborhoods were created: the boulevard Regina Margherita and the course Italy, where beautiful Liberty-style villas arose.

The city is currently inhabited by about 300,000 people. 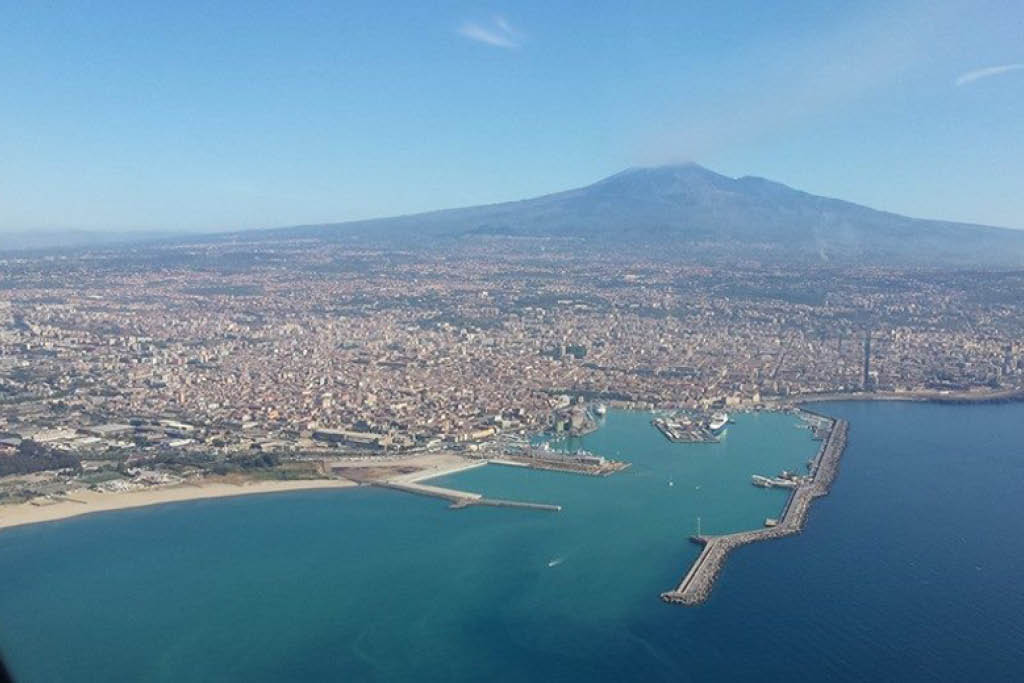 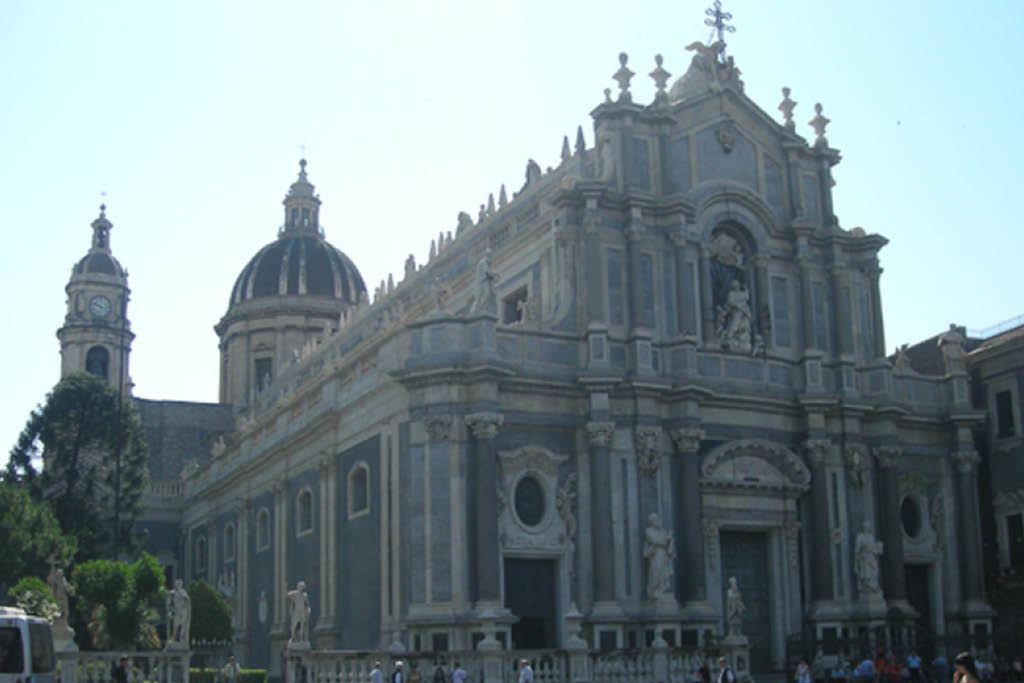 Catania cuisine is one of the richest and tastiest in Sicily.

The great richness and ease in the redevelopment of raw materials and the love for “flavorful” cuisine, combined with the culinary contaminations fruit of the numerous foreign dominations over the centuries, make Catania a gastronomic reference point of the island.

Among the first dishes deserves the place of honor pasta alla Norma, which takes its name from a Celtic masterpiece by Vincenzo Bellini: tomato sauce, fried egg, basil and abundant grated salted ricotta.

Other notable dishes are pasta with cuttlefish black, topped with a sauce prepared with tomato extract, cuttlefish and black of these tasty shellfish; pasta with masculini (fresh anicies in a sautéed onion, peas and fennel rizzu); pasta’ ncaciata, seasoned with cauliflower cooked in an onion pan and seasoned with salted anchovies, olives and caciocavallo.

Meat and fish are served everywhere, with a fondness in the capital for horse-meat, often accompanied by side dishes that, in reality, are real unique dishes:

The rotisserie is one of the most renowned in Italy. The main pieces are the Arancini, crispy squabpy rice-filled, Siciliana (thin puff pastry filled with tuma and anchovies), salted crispelles (sweet dough pancakes, stuffed with fresh ricotta or anchovies), the shaded ones ( made with bread dough stuffed with plenty of tuma and anchovies, or vegetables, or cauliflower, baked).

Typical desserts are ricotta Cannoli, Sicilian Cassata, but above all marten fruit or real pasta (soft almond-based pasta with multiple forms of colored fruit); rice-crystals or traditional “olivette di Sant’Agata”. The famous ice creams and Granita (tossed on demand with hand-crafted cream). Among the latter the most popular flavors are almond, lemon, coffee, chocolate, mulberry, peach.

The most representative wines on the territory of Catalonia are, without a doubt, those that are produced on Mount Etna.

The Volcano gives the wines characteristics of minerality and great elegance, due to the strong thermal excursions between day and night and the peculiar pedoclimatic conditions.

“Mountain” wines at particular latitudes, on an island famous for the large number of hours of sunshine during the year: this is the great richness of volcanic wines, along with soils rich in variegated mineral components.

It is on Mount Etna that they have been cultivated for hundreds of years, with the traditional tree vine, the Nerello Mascalese, the Nerello Cappuccio, the Carricante, the Minnella and the Catarratto, all vines that contribute to the production of wines classified as Etna Doc, on all slopes of the Volcano.

Known in the not-too-distant past as “cut” wines to give alcoholic gradation to the much more famous wines of the Northern Italy or French, today the wines of Etna shine with their own light and have conquered substantial slices of the international market, thanks to their recognized longevity.

Piazza Duomo, the focal point of the city, is a grand square, rebuilt in the Baroque style in the 18th century after the terrible earthquake that devastated the city in the late 1600s. Here you can see the baroque facade of the Cathedral dedicated to St. Agatha, founded by Ruggero D’Altavilla as a fortified church in the 11th and rebuilt on the rubble of the Norman cathedral destroyed by the earthquake of 1693. The facade, renovated by architect Giovanbattista Vaccarini, has an unusual scheme based on the use of lava stone black and limestone white, like many of Catania’s 18th-century buildings. Inside, you can admire the tomb of Vincenzo Bellini and the chapel of St. Agatha, where the relics of the patron saint are kept. Below the decking of the Cathedral and the square you can admire the old Roman remains of what were once the Terme Achilleane.

In the center of the Piazza Duomo, in 1735, Vaccarini arranged, on a bordered base with small decorative fountains, an ancient elephant in lava stone: u Liotru, symbol of Catania, which supports an Egyptian obelisk and on top of the agatini symbols. On the north side is the Town Hall (Elephant Palace), in front of it the Amenano Fountain and the Seminary of the Clerics which supports, on the one hand, the ancient Gate of Charles V, one of the ancient entrances of the city walls and on the other, Porta Uzeda, dedicated Spanish Vicerè. Nearby, you can also enjoy the city’s exuberant fish market: la Pescheria.

To the north of here, a second impressive square, University Square, which gives on Via Etnea, the city’s main shopping street.

In Piazza Federico II of Svevia, the Ursino Castle stands. Built at the behest of the Svevel Emperor, it is now Catania’s most iconic museum. Inside, you can be fascinated by the Roman and Greek artefacts, metal engravings and the Art Gallery which includes paintings of great artistic value. The castle often hosts temporary exhibitions.

In Piazza San Francesco, inside the historic Palazzo Gravina Cruyllas, is Vincenzo Bellini’s house-museum, where a large collection of prints and autographed scores of the great composer are preserved, as well as his original harpsichord.

The same building houses the Emilio Greco Museum where there is a collection of lithographs and etchings of the artist. In front of the building is the Church of St. Francis of Assisi at the Immaculate where some of the Characteristics of the Feast of St. Agatha are preserved. Along Via Vittorio Emanuele is the former Benedictine convent of San Placido, inside the 18th century cloister you can still see the ruins of a balcony of the Platamone Palace, now home to the Culture Directorate of Catania.

Continuing in this direction you can admire the remains of the Greco-Roman theatre and those of the Odeon. To the north, the Church of Santa Maria della Rotonda, originally a Roman bath.  Traces from the 2nd century BC are found in Piazza Stesicoro, in the ancient Roman Amphitheatre, which welcomed up to 15,000 spectators.  For a more modern theatrical experience, you can admire the Teatro Massimo Bellini in the square of the same name.

Via Crociferi, deserves special attention for its late Baroque style, declared by Unesco “Heritage of Humanity”.

Here you can admire the beautiful churches of San Benedetto and San Giuliano. Other wonderful examples of baroque are the Church of St. Francis Borgia, attached to the former jesuit convent.

The Church of San Nicola l’Arena is located in Dante Square, whose facade was never completed and the adjacent Benedictine Monks Monastery, one of the largest monastic complexes in Europe, extremely interesting for the fine Baroque ornaments of its balconies and windows, as well as, for its two inner cloisters, which show splendid lodges. 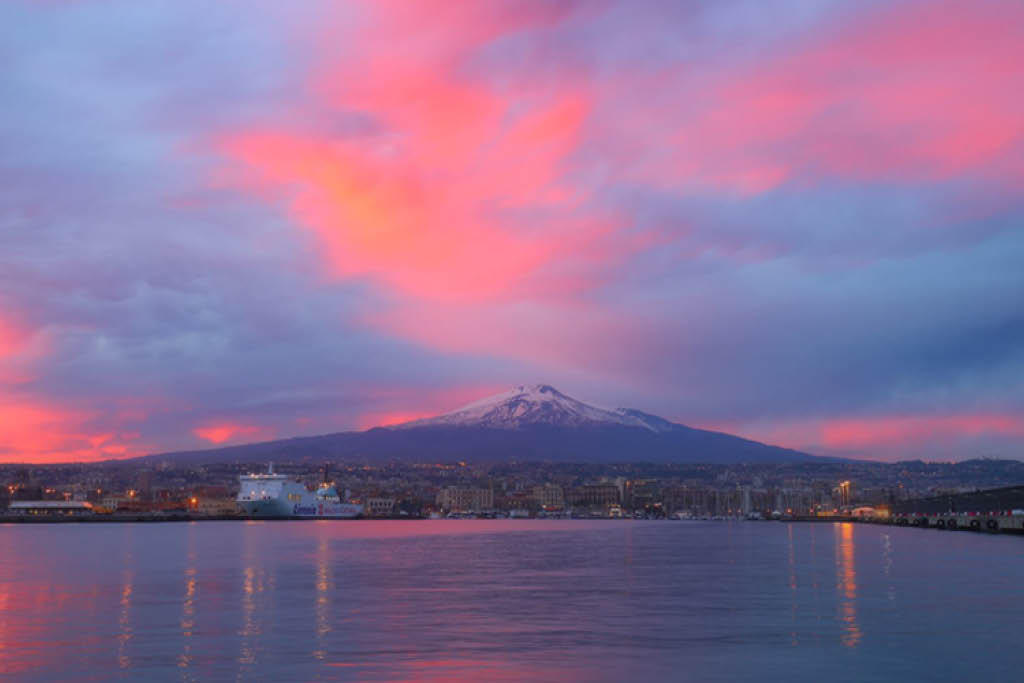 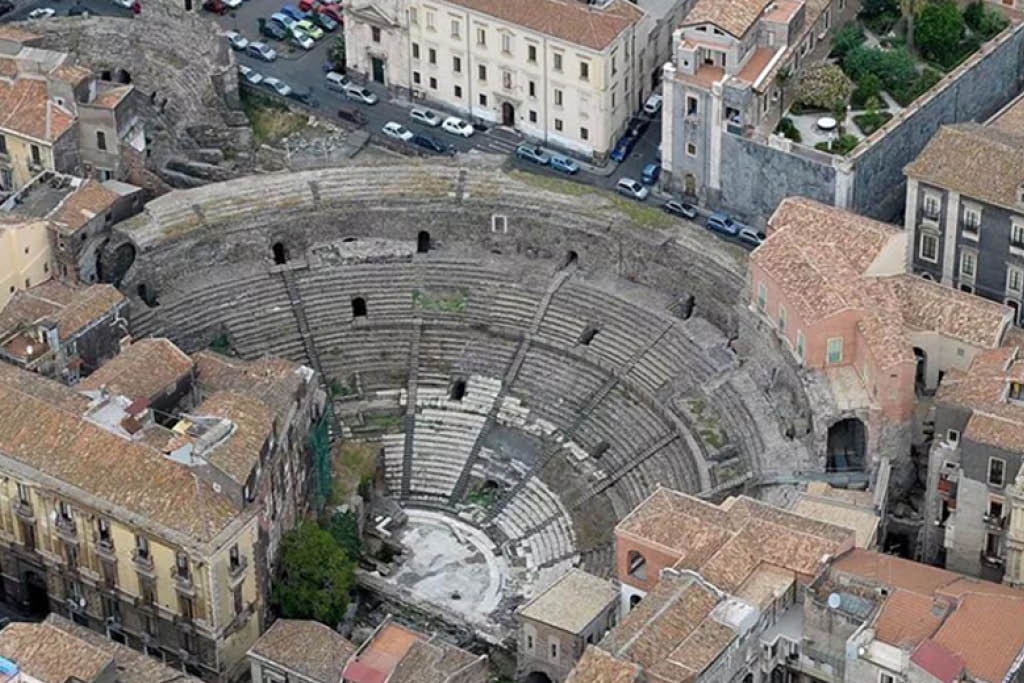