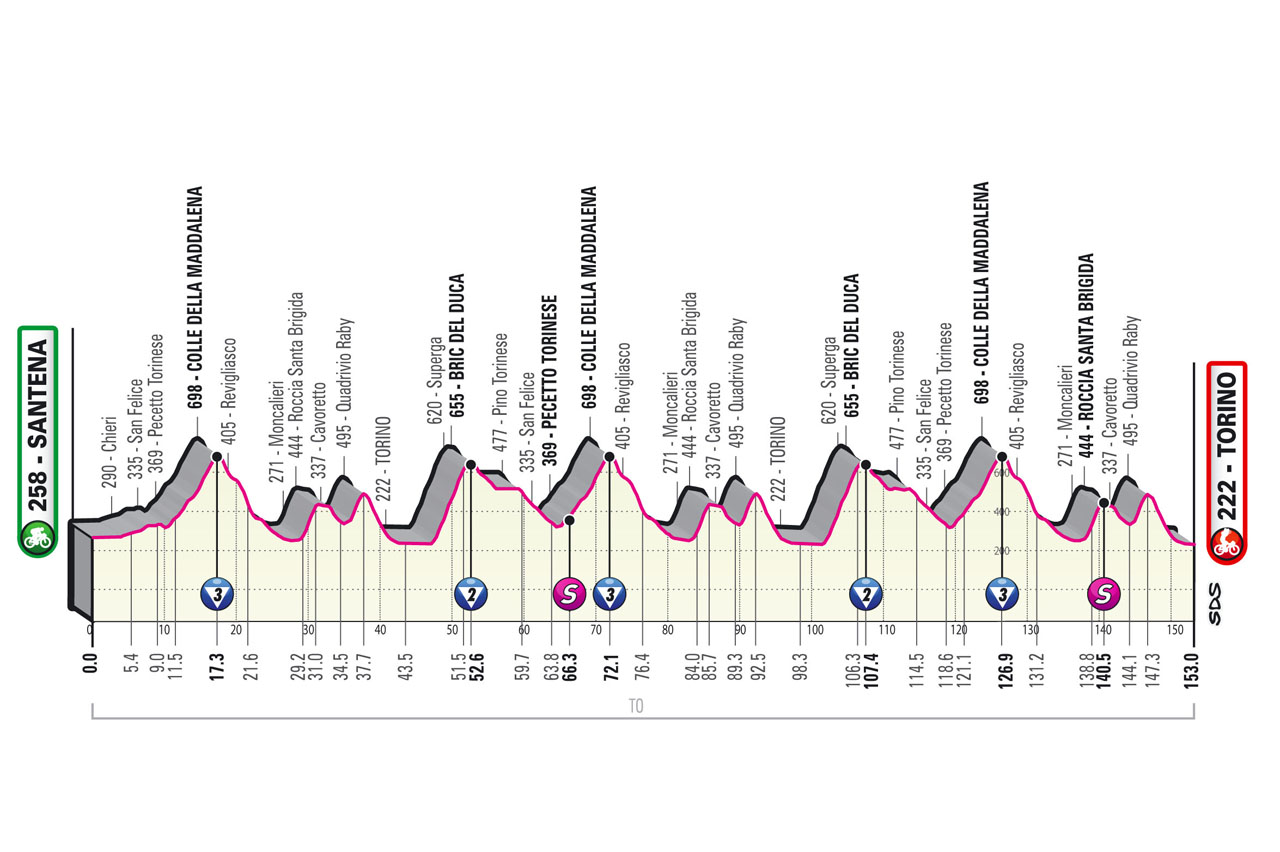 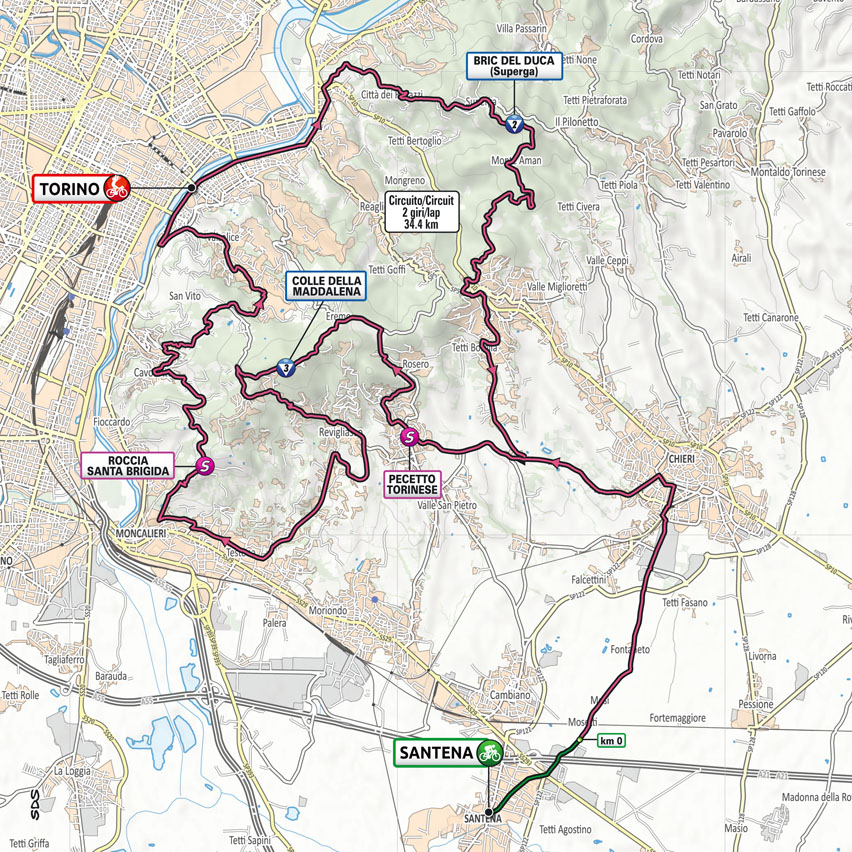 A short and challenging stage, with no pause for breath. The overall elevation gain, when compared to the stage length, is worthy of an Alpine stage. The first 10 kilometres, running flat from Santena to Chieri, are the only ones with no climbs or descents. The route then takes two and a half laps of a circuit that ascends to Colle della Maddalena, descends into Moncalieri and takes a punchy climb up to Santa Brigida. After passing over the finish line at the Gran Madre, and taking in the Superga ascent, the route goes back to the foot of the Colle della Maddalena to begin again. Overall, the peloton will take a double pass over the Superga hill, and three ascents of the Maddalena and Santa Brigida, for a challenging, punchy finale.

Capital of Piedmont and defined by Le Corbusier as the city with the most beautiful natural position, Turin is surrounded by a lush hillside, dominated by the Juvarrian Basilica of Superga, crossed by the great river, the Po, and surrounded by the Western Alps. Its history begins more than two thousand years ago with a small village “Taurasia” which, in Roman times, became Augusta Taurinorum, hence the name. In 1280 the Savoy dynasty conquered Turin and under their reign the city experienced one of the most important transformations in its history, becoming one of the major capitals of the Baroque, thanks to the great architects of the court (from Vitozzi to Guarini and Juvarra) as well as guardian of the Holy Shroud. First capital of Italy in 1861 with many records behind it, from cars to cinema to design, it is a city of discreet, regal charm, to be discovered walking through its elegant baroque squares and arcaded streets: 12 kilometers of continuous arcades on a total of 18, that accompany the visitor on a fascinating journey through historic cafes, old bookstores and Royal Residences (Unesco heritage since 1997) sumptuous palaces of the court or holiday. In Turin, art is also at home with over 40 museums, including the Egyptian Museum, second in the world for importance of collections, and four National museums, the Museum of Cinema, the Automobile, the Mountain and the Risorgimento as well as prestigious venues for contemporary art. 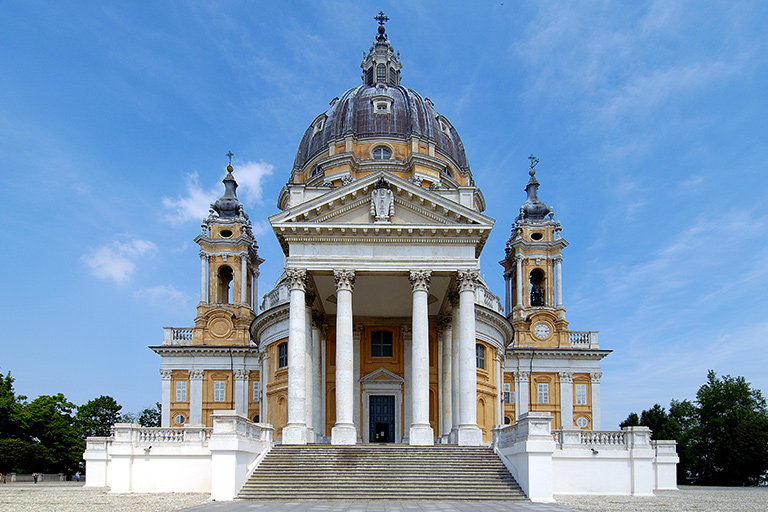 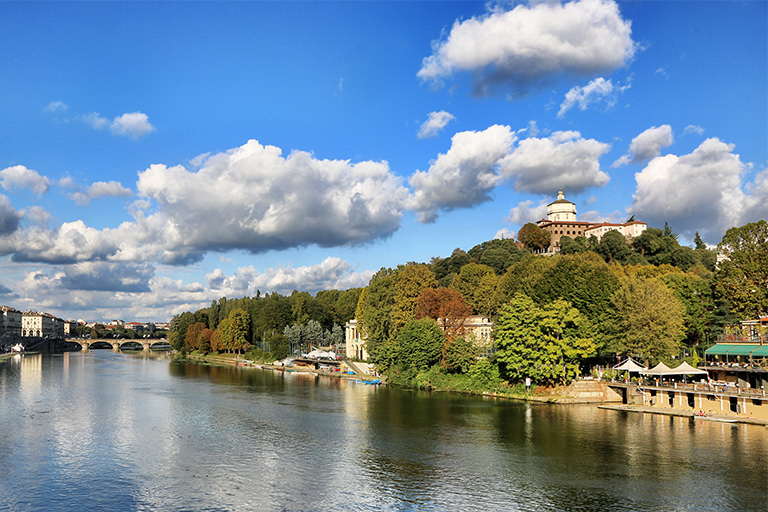 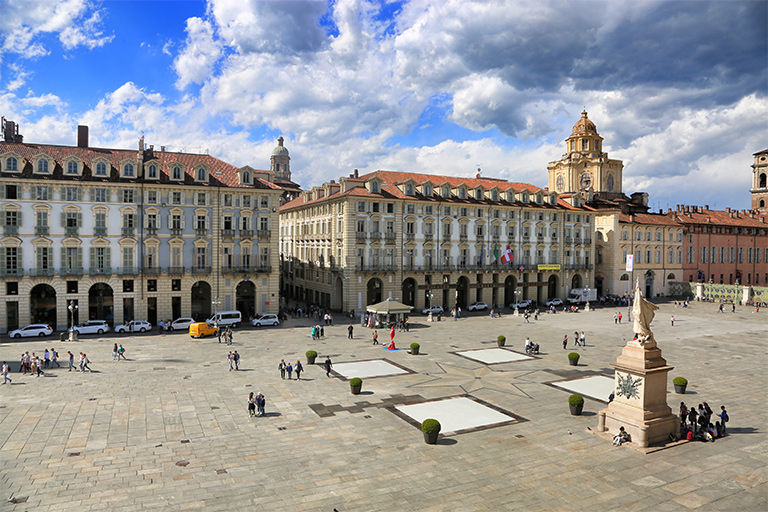 Turin’s cuisine boasts a long and refined tradition, making Turin one of the world capitals of taste. Great use is made of vegetables, meats, cheeses, irreplaceable ingredients for refined and tasty recipes. Appetizers are the lion’s share: from vitello tonnato (veal in tuna sauce) to anchovies in green sauce, from meat and fish in carpione to more delicate dishes such as vegetable flans and tomini, small fresh cheeses. As first courses, stands out bagna caôda, ancient peasant recipe based on a sauce with oil, anchovies and garlic where raw and boiled vegetables are dipped, agnolotti, gnocchi and risottos and as second courses, mixed boiled meat, braised meat and mixed fried food, just to mention some of them. The table never lacks breadsticks in the variants “stirato”, crumbly and with a delicate taste, and “rubatà”, full-bodied and lightly leavened, stick-shaped, an all-Turin invention, and cheeses, the list of which is endless and delicious: from robiole, to tome, from tomini to straw cheeses with a firm or doughy consistency. And to end on a sweet note, Turin’s confectionery industry boasts the invention of zabaglione, egg yolks beaten with sugar and Marsala wine, and bignole, delicate and irresistible little bundles covered in icing, and chocolate with the iconic giandujotto, obtained by mixing chocolate with toasted hazelnut flour, cremini, alpini with liqueur, pralines and other delights.

It is obvious that Piedmont is a land of great wines: among the most renowned reds, his majesty Barolo, Barbaresco, Barbera, Nebbiolo, Dolcetto and among whites, Arneis, Gavi and Malvasia. But it is not well known that the province of Turin is the custodian of many great wines. The territory around Turin is the homeland of an important and ancient viticultural tradition: along about 600 kilometers (600 miles) there is the area of Canavese, Collina Torinese, Pinerolese and Valsusa where to appreciate 25 DOC wines, produced by 11 characteristic vines. Among them, the most Turinese of all is Freisa, a ruby red wine, slightly sparkling, produced in the area of Chieri and in the urban vineyard next to Villa della Regina, a few hundred meters from the city center. Turin has another record: aperitif. Known all over the world, Vermouth was born in Turin in 1786 by Antonio Benedetto Carpano, and was initially sold in a liquor store in Piazza Castello. For its recipe are used Moscato from Piedmont and full bodied wines from the South, with extracts and infusions of about 30 aromatic herbs. There are many types of Vermouth: red, white, rose, sweet and dry. In Turin it is a real aperitif.

Turin is a city of a thousand souls, a perfect blend of past and present, which looks to the future while retaining its charm of the ancient capital of Italy. In the historical center alone, there are six Royal Residences (UNESCO World Heritage Site since 1997), some of which house prestigious museums: Palazzo Reale and Palazzo Chiablese, which are part of the Royal Museums, Palazzo Carignano, which houses the National Museum of the Risorgimento, Palazzo Madama (unique in its baroque and medieval style) with its Museum of Ancient Art, Villa della Regina and Valentino Castle. And then, just a few kilometers from the city center, the Palazzina di Caccia di Stupinigi, the Reggia di Venaria Reale and the Castello di Rivoli, home to the prestigious Museum of Contemporary Art. There are also imposing religious buildings such as the Duomo where the Holy Shroud is kept. From the heart of Turin, Piazza Castello, branch out the main city streets: Via Roma embellished by Piazza San Carlo, the baroque lounge, Via Garibaldi, the longest pedestrian street in Europe, and Via Po that leads to the Church of the Gran Madre di Dio at the foot of the hill, a large green lung dominated by the Basilica of Superga, a work of Juvarra, which contributes to making Turin one of the greenest cities in Italy. Walking along via Po, we meet the symbol of the city, the Mole Antonelliana, guardian of the National Museum of Cinema, a real “temple” dedicated to the seventh art. There are also many spaces dedicated to contemporary art, including the GAM (Gallery of Modern and Contemporary Art) and the Sandretto Re Rebaudengo and Merz Foundations. Between a residence and a museum, the city should be admired along the banks of the Po until reaching, among the lush nature of Valentino Park, the Borgo and the Rocca Medievale, built for the Italian General Exhibition of 1884. From here, the view of the great river and the hill is breathtaking. Turin also has a design soul, so much so that it has been declared a Creative City by Unesco precisely because of its ability to reinvent spaces and places to be discovered by walking in more peripheral neighborhoods: from the Intesa San Paolo skyscraper, whose 35th floor houses the highest restaurant and cocktail bar in Italy, to the Officine Grandi Riparazioni, once a train shelter and now a museum, food and tech center, up to the new Lavazza headquarters, Nuvola, with the museum dedicated to Lavazza coffee. 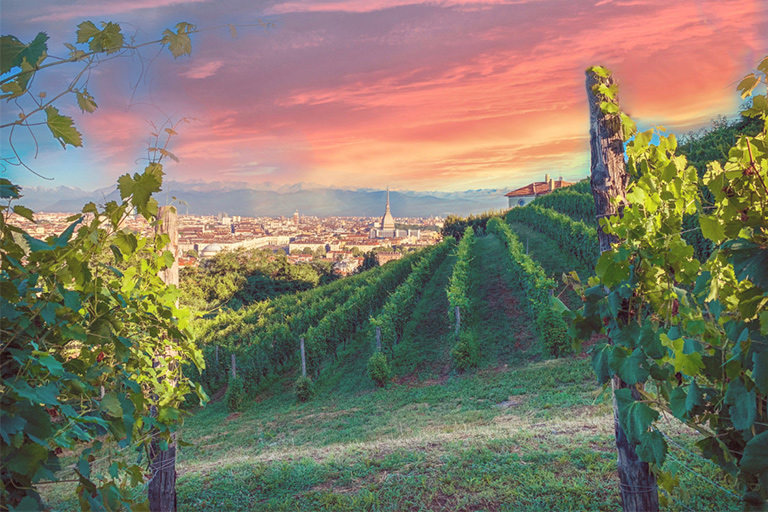 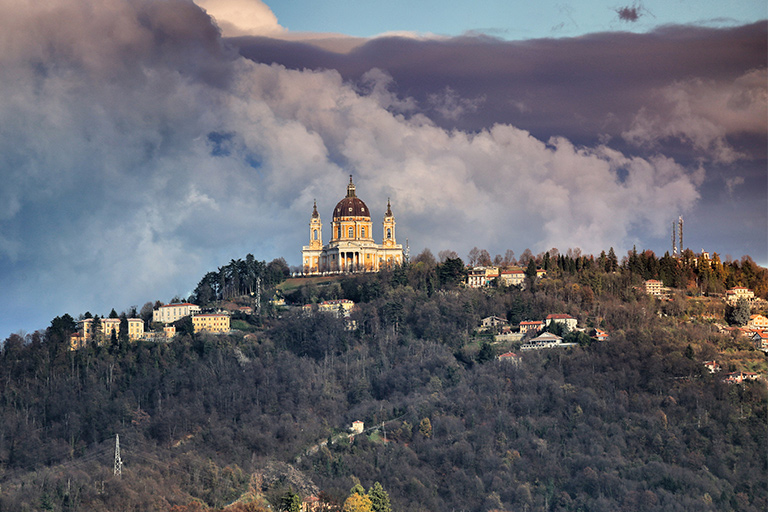 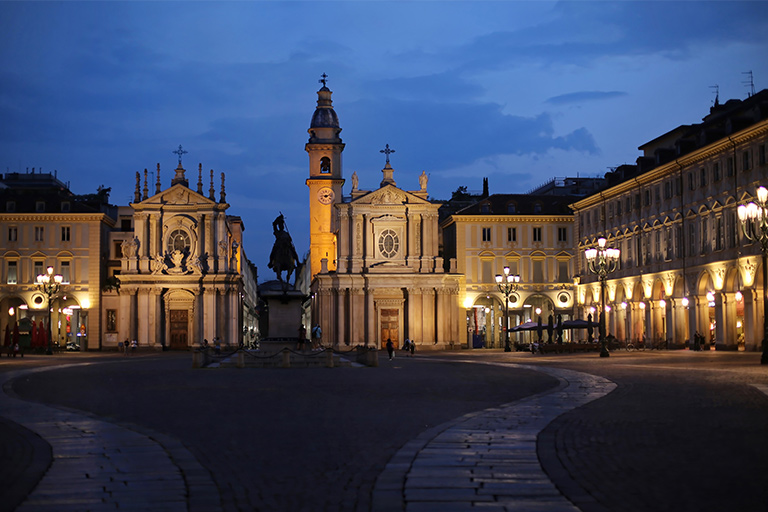 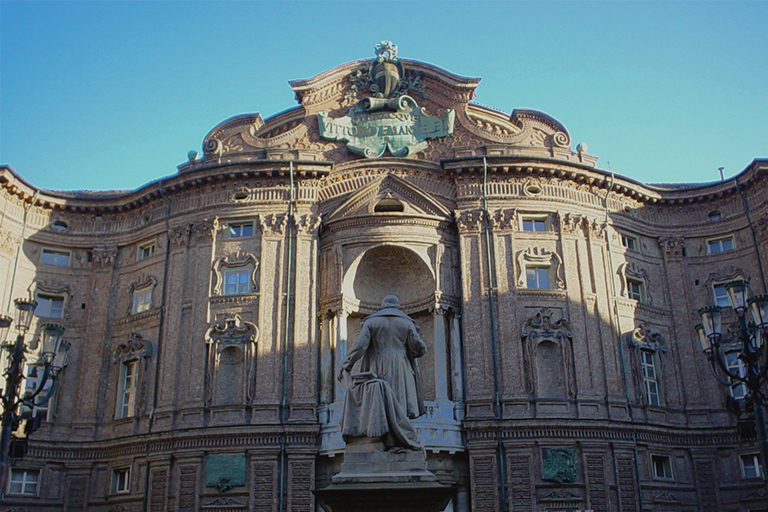 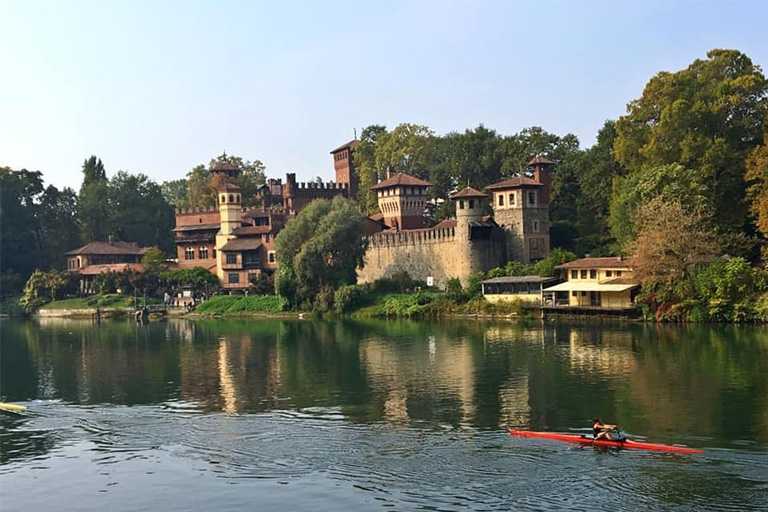 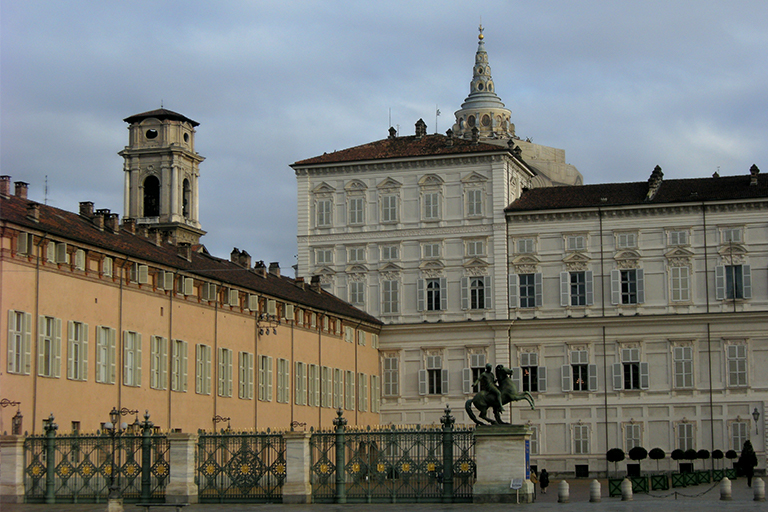