Deceuninck-Quick Step had torn the peloton apart in the crosswinds before it ever got to km 66.2, the intermediate sprint at Taranto, hometown of a forgotten sporting genius. Iccus, who either won the 84th Olympic Games in 444 BC or the 70th Games in 470 BC, depending on your source, was a descendent of the Spartans, one of those marauding peoples who roamed the Mediterranean looking for places to colonise and exploit. He prepared for the Games the Spartan way, with a frugal diet and sexual abstention. His forebears would be proud to know that all athetes are Spartans these days. After all, the dietary revolution Iccus started has become a global phenomenon, with mutinational brands taking over the world of sport – except perhaps for Simon Pellaud, in the breakaway again today. Last time, on stage 4, he had the effrontery to exhibit his preferred mid-race food to the moto camera: Colombian bocadillo – a natural gel of concentrated guava juice. Take it as an act of resistance.

When it became clear that Vanhoucke, Pozzovivo and Fuglsang – 4th, 6th and 7th in GC – had missed the split, Kelderman’s Team Sunweb and Kruijswijk’s Team Jumbo Visma started working too. Such was their work rate, an ingenuous local might have believed they had been bitten by one of those huge wolf spiders common in the Apulia region, Lycosa tarantula, the poison of which was once believed to cause a syndrome called Tarantism, characterised by manic, frenzied dancing, First described in the 11th century, it was so common in the 16th and 17th centuries that Francesco Girolamo Cancellieri (1751 – 1826) wrote a treatise on the subject. “In the grip of this repulsive beast,” he wrote, “you cry, dance, throw up, tremble, laugh, go pale, faint, and suffer great pain. Sweating and antidotes help, but the sovereign and only remedy is music.”

Whence the Tarantella, which starts slow but soon accelerates in a frenetic crescendo. Were the team cars channelling it into their riders’ earpieces? Something must lie behind Thomas De Gendt’s amazing ubiquity: he made the early, four-man break. When they were caught, he dropped back through the first peloton, and the second one, to the third, looking for his team-mate, the Maglia Bianca Harm Vanhoucke, whom he then led him back to the peloton. After a crash beneath the “45 km to go” stanchion blocked the road entirely, holding up half the field, the indefatigable De Gendt did it all over again. Chapeau.

Were Groupama-FDJ using the same tune? either way, Arnaud Démare was unstoppable again today. And, for all the remarkable distinctness of the setting; despite the attractions of localism on one front, globalism on another, and sponsors’ demands on a third, it was striking that the French champion chose to appear on the podium not in his regular team sponsor’s shirt but in the colours of the French flag. Either the imagined community that exercises the greatest magnetism continues to be the national one, or it’s the only jersey he brought with him. 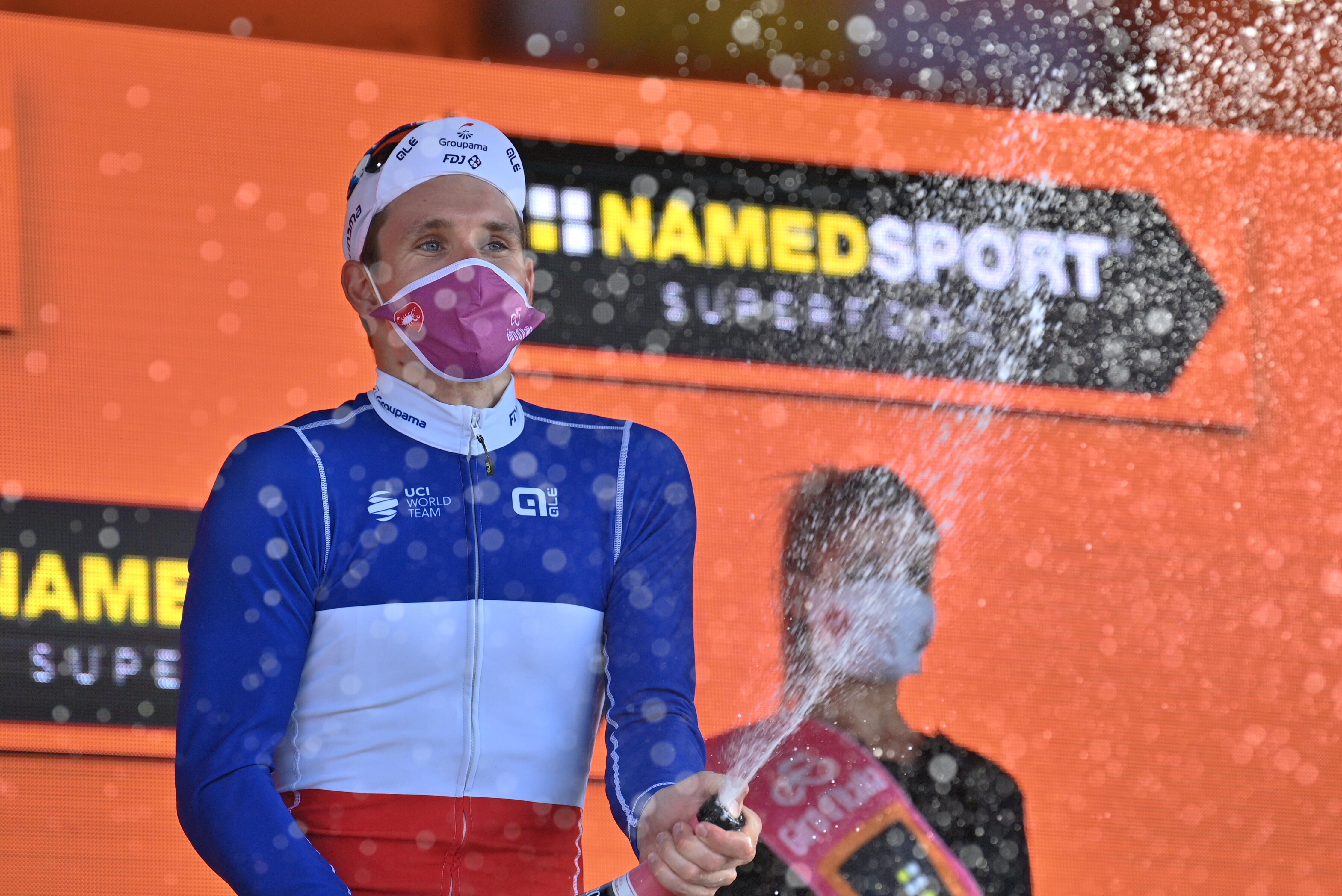