The Giro was over on May 30, but many of its stories were still to be told.

Which is why we launched the first edition of the “Giro d’Italia Awards” as a way to let you help us pick and immortalize the best moments of the Corsa Rosa.

We chose 12 categories which have become the chapters of a story – your own, unique tale.

The Best Break award went to Daniel Martin, who soloed over the finish line in Sega di Ala after dropping his fellow breakaway partners during the final ascent, and holding out against all the other GC contenders who had been fighting behind him.

The Best Sprint award went to Peter Sagan for winning in Foligno after a lengthy sprint, which he had outlined many kilometres before the finish, asking his team to push hard along the climbs, and forcing pure sprinters to step down.

The Best City Host Dressing award went to Notaresco, in the shade of dozens of pink umbrellas hanging above the stage start.

In the Best Attack category, you voted for Egan Bernal’s accomplishment on the Passo Giau, when he powered through the hairpins of the Cima Coppi in the Leader’s jersey, and none of his rivals managed to keep up with him.

The Best Team Spirit award went to Daniel Martínez, the most trusted ally for Bernal on mountain stages, who defended, encouraged and advised his captain throughout the three racing weeks.

The Amore Infinito award went to Egan Bernal for thoughtfully removing his rain jacket on the home straight in Cortina, to proudly sport the Maglia Rosa when winning such a major stage.

Stage 9, Castel di Sangro-Campo Felice, was honoured as the Most Spectacular Stage because it featured an off‑road summit finish, because it was hard‑fought by all the GC contenders, and because that was the day Bernal took his first Maglia Rosa.

The Best Summit Finish award went to the ‘Kaiser’, the Zoncolan, one of the most legendary climbs in modern cycling, with gradients topping out at 25% – one of the key turning points of this Giro.

The Best Revelation Rider award went to Lorenzo Fortunato, who – on a misty day – took his first professional career win by conquering the mighty Zoncolan.

The award as the Best Domestique went to the rider who also won the Best Team Spirit prize, Daniel Martínez, for waiting and cheering for his captain in his moment of crisis – one of the most beautiful moments of the Corsa Rosa. 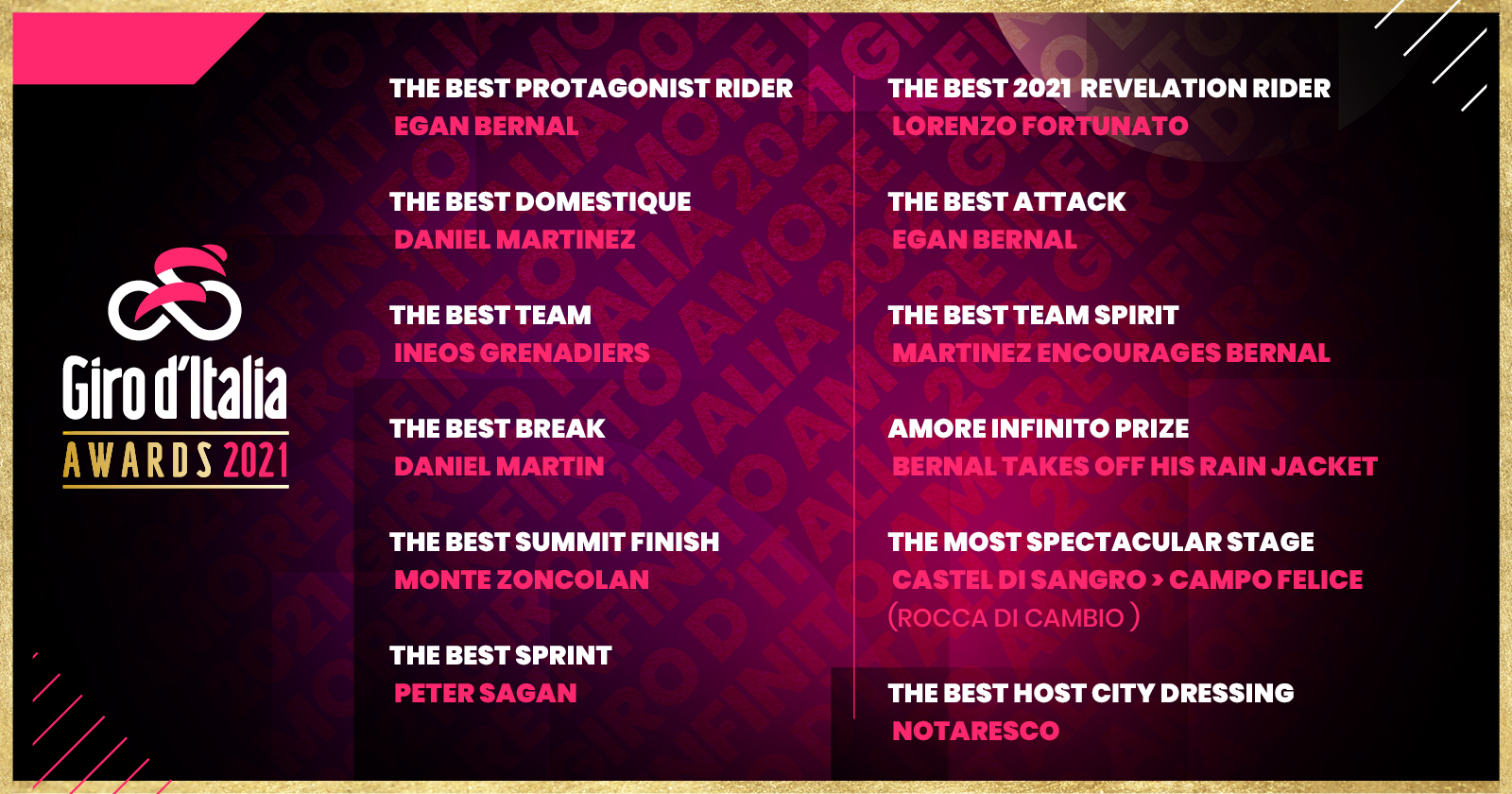