Roglic, what a Jump! Brambilla keeps the Rosa

The Chianti Classico individual time trial stage went to former ski jumper Primoz Roglic who was already a surprise runner up in the opening race-against-the-clock in Apeldoorn. This time he took advantage of favourable weather conditions. Behind him, riding in pouring rain, Gianluca Brambilla retained the overall lead with by second over his team-mate Bob Jungels and GC contenders Vincenzo Nibali, Mikel Landa, Steven Kruijswijk and Alejandro Valverde who finished 19th to 22nd in the stage, with just eleven seconds between them. 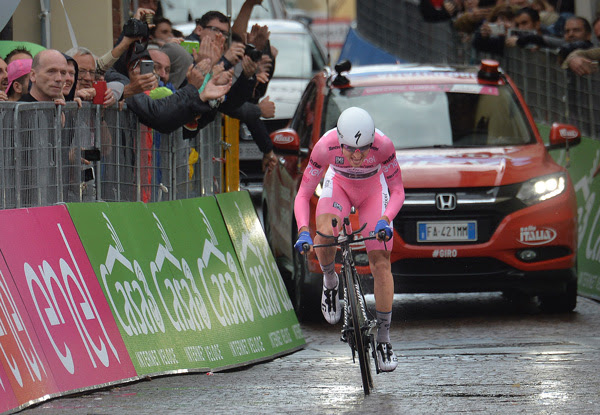 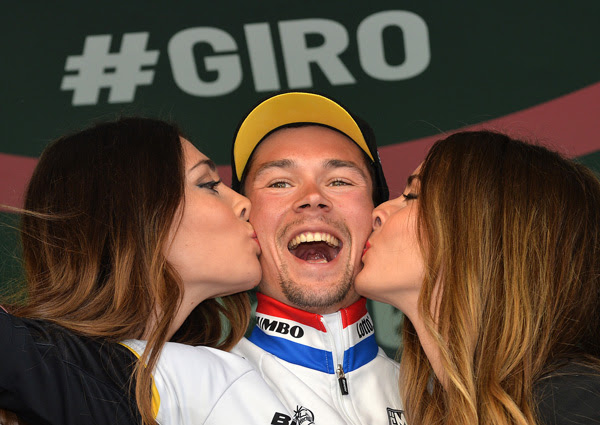 QUOTES
Primoz Roglic said in the press conference: “I’m really happy with my performance. I should be jumping and smiling but it’s crazy, it’s hard to realize. I was unlucky to miss out on the victory in Apeldoorn [on stage 1]. I only lost to Tom Dumoulin by a few centimetres. But today, it’s the opposite. The change of weather has made me a lucky man. I had some problems with my bike at the start but luckily I had a spare bike and I changed it. When I quit ski jumping and started cycling, I was dreaming of becoming the best but I didn’t expect to succeed so quickly. The longest individual time trial I did before today was 10km long. Now I’ll do my best to help Steven [Kruijswijk] for GC”.

The Maglia Rosa Gianluca Brambilla said in the press conference: “It was a difficult and technical course and the rain made it even harder for me. I’ve seen so many crashes but we rode strongly. I say “we” because if it wasn’t me, it would be my team-mate Bob Jungels here with the Maglia Rosa. It happens in cycling that gregarii take this jersey. Now I’m curious about the feeling of wearing it the middle of the bunch, it must be a great feeling. We have two hard weeks of racing to come. I’d like to win another stage”.

The Maglia Bianca Bob Jungels: “I’m definitely happy with today’s result. I have no regret that I miss out on the Maglia Rosa because a team-mate of mine [Gianluca Brambilla] has it. It’s rare in a Grand Tour that two riders from the same team occupy the first two spots after so much racing. I’m especially happy regarding the weather conditions. I was riding under a pouring rain. I had to be careful in the curves but without losing too much time. I made a pretty good impression. I gave it all. I knew from the start it was a good time trial for me because I saw the course after the Strade Bianche in March. Our team spirit is great. Maybe the coming climbs will be harder for us but as a team we’ve achieved so much already… We’ll try to continue”.

Roglic leaps into the unknown