“Tom Dumoulin’s performance was wonderful. It was a privilege to stand on the podium of this beautiful opening stage of the Giro. We saw Apeldoorn, Gelderland and the entire country at their very best today” said King Willem-Alexander of the Netherlands.

Local hero Tom Dumoulin of Team Giant – Alpecin took the first Maglia Rosa of the 99th Giro d’Italia d’Italia, after clocking the 9.8km of the inaugural time trial in Apeldoorn, the Netherlands, in 11’03” at an average speed of 53.212km/h.

Yet he won the stage by a tiny margin, edging out surprise runner up Primoz Roğlic (LottoNL-Jumbo) by one hundredth of a second. The Slovenian neophyte, a former junior world champion in ski jumping who was expected to shine in the mountains, was the revelation of the day.

The pan-flat course initially shone the spotlights on another Giant-Alpecin rider, with Tobias Ludvigsson in the hot seat for one and half hours. The lanky Swede eventually finished fourth and shared the podium with his leader Dumoulin when he received the white jersey of best young rider.

In the races inside the race, Vincenzo Nibali of Astana Pro Team was the fastest of the other favourites for overall victory, opening an advantage of 5″ over Alejandro Valverde (Movistar Team), 11″ over Esteban Chaves (Orica-GreenEdge) and 21″ over Mikel Landa (Team Sky). Marcel Kittel of Etixx-Quick Step won the battle of the sprinters for whom the Maglia Rosa is within reach thanks to the time bonuses available in the second and third flat stages in the Province of Gelderland. With a deficit of 11 seconds and a total of 13 seconds up for grabs on stage 2, the German is in a favourable situation to dethrone Dumoulin. 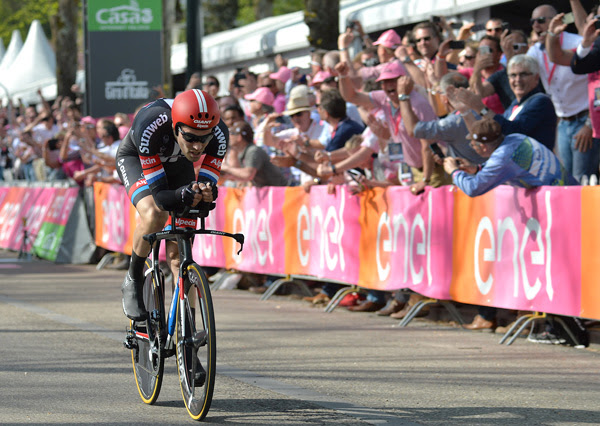 OTHER QUOTES
Press conference declarations by the stage winner and race leader Tom Dumoulin: “It sounds like I’ve made a few people happy today, hearing all the people who were shouting my name after I won, but mostly I made myself happy. It’s a very emotional moment. It’s a crazy feeling. In cycling, plans usually don’t work. I really meant it when I said that it would be hard to win this time trial. I knew that Primoz Roğlic had set a good time. When I crossed the line, I thought I was three seconds ahead of him, but we were actually on the same time. I’ve felt frustrated on a few occasions this year with second places in time trials but luck was on my side this time. It doesn’t matter if I win by a hundredth of a second, one second or ten seconds. It’s an important step in my career. I didn’t grow up in a cycling environment but I’ve learned enough about the history of cycling to understand the meaning of the pink jersey. I hope I still have it when we arrive in Italy but it will be hard to keep it against the sprinters who will fight for time bonusses. However I’ll do my best to wear the pink jersey in this beautiful country. The weather forecast is good for the next two days and I believe a lot of people will be out on the road to cheer me on. It’s very special to be in this position in the Netherlands”.

IT’S ALL ABOUT PIM, TIM AND TOM!

The Giro starts today with a 9.8km ITT